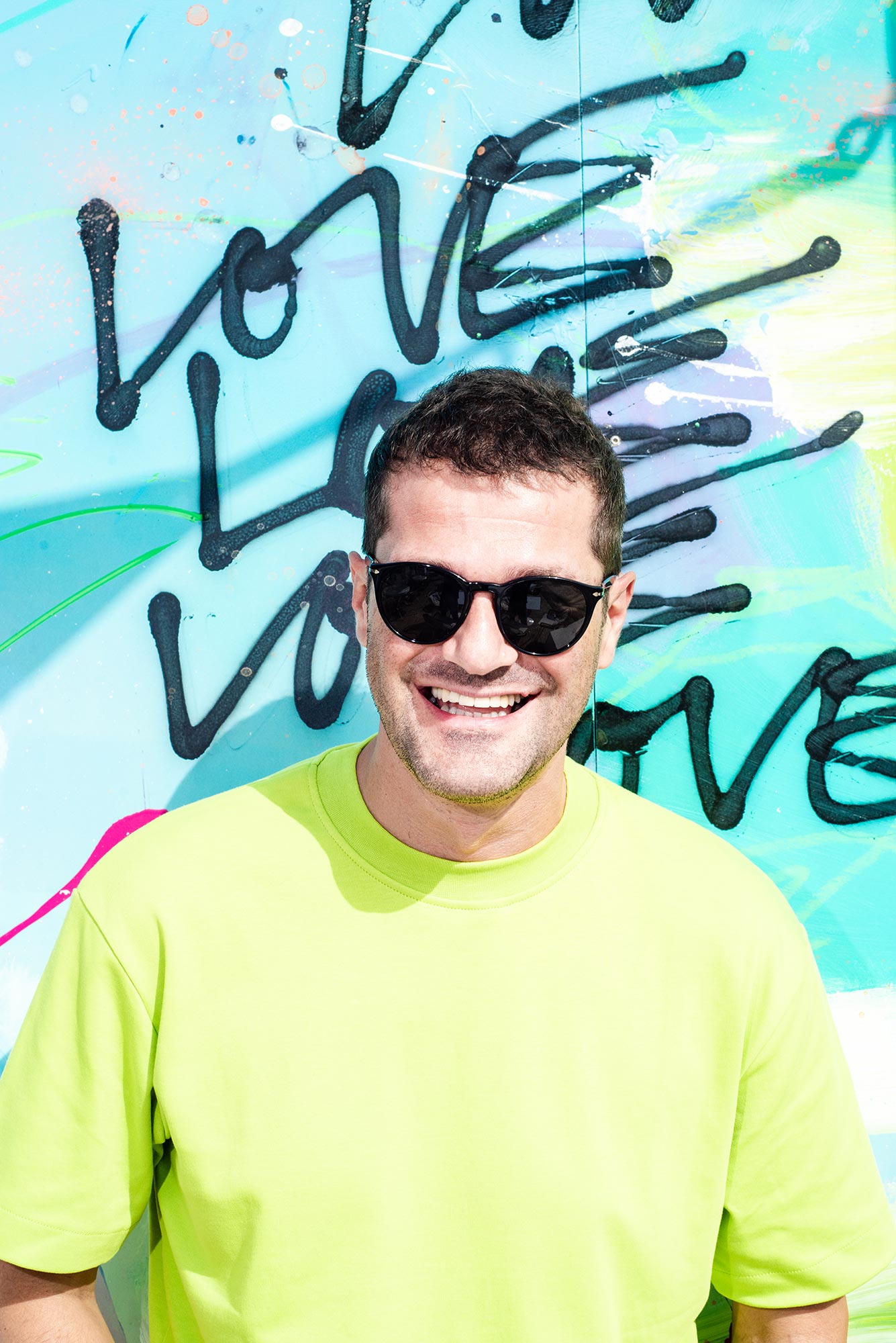 Andrea Oliva – “Ronaldo showed me his playlist – with my music on it!”

Andrea Oliva is one of the biggest names in the international club business. The figurehead of “Ants”, the Ushuaïa event flagship. He is on a first-name basis with the luminaries of the entertainment scene. The Swiss-born southern Italian has a special friendship with Ronaldo Nazario de Lima – “Il Fenomeno”. The two-time Brazilian world champion and by far the best center forward of all time blew the die-hard AC Milan fan Oliva away at their first meeting. What he grew up with, how he grew up, what the 41-year-old thinks of the music business and what values are important to him, he tells us in an exclusive interview. Over perfectly chilled Verdejo and a sumptuous sushi platter at Minami Ushuaïa Restaurant.

Starting with his parents, who moved from Calabria to Monza 45 years ago to immigrate to Switzerland, like many southerners in the seventies, and earn much more money there as guest workers than at home. In Möhlin, a suburb of Basel, where Andrea was born in 1981. “I attended elementary school there. In Basel, I did a commercial apprenticeship in a rice office.”

To work in the music industry from then on. “I started DJing when I was 12 and made a living from it pretty quickly. It was easy. Especially if you lived with your parents, like I did. It was clear to me that I never wanted to do anything else. I was there from the very beginning when the first big techno parties in Switzerland took place at the Stücky-Areal and Planet E. I was a part of it. Derrick May (Detroit techno legend and scene pioneer) played his first international gig at the Stücky. The Washing Machine parties, Sven Väth with pink hair, there where it all began – legendary.”

Techno was a movement, stood in the early or mid-nineties for freedom and equality. Especially that of the LGBT community. If you weren’t there, it’s hard to understand that pioneering feeling and the accompanying vibe of that time in retrospect. I was there, and know what he is talking about. Despite all the enthusiasm and dedication, Oliva had to get a “regular” education – the parents’ requirement to be allowed to lead this life. In Möhlin, this suburb of the border triangle city of Basel (Germany, France, Switzerland). What was it like there around that time, 1992, for example?

“Super cool. It’s a village where 7,000 people live. You knew everyone, my friends are still there. I could grow up there happily, surrounded by cows and nature. Very down to earth. With hard-working parents, who on the one hand were very supportive of my passion, and on the other hand gave me good values: Loyalty, friendship, honesty, diligence, gratitude, being happy with what you have, family cohesion. That’s the most important thing.”

In Basel, where he frequented as a teenager, there were also neighbourhoods where groups of young people formed to gain respect through their collectively prepotent behaviour. Andrea Oliva was never part of that – on the contrary.

“I wasn’t in any of those wanna-be gangs. And do you know why? First and foremost, because of the music. I was working, as I mentioned, while other teenagers were hanging out at night, smoking pot and living this hip-hop lifestyle – it was completely uninteresting to me.”

Oliva put on tap himself, but points out an important point: “Of course I still adore NAS, A Tribe Called Quest or Wu Tang Clan today – but I’m also just punk, listened to Rage Against The Machine, Nirvana, Bad Religion. Even Deftones still do it to me today. A lot of my friends were in the techno scene, and I liked that music too. In other words, my basic passion for music and appreciation or admiration of all genres made me a reflective, tolerant person. I never belonged to one, and if anything, simply belonged to the music scene.”

Oliva feels it’s important to continue that. “What I never understood were these taboos of each genre group to engage with a different direction of music or lifestyle. That’s the saddest thing about it. The diversity of music is, after all, the very beauty of this art form – and to engage with the most diverse facets of it, the whole point. It always comes down to the quality and content of the music, no matter what genre.”

If he doesn’t like something, Oliva doesn’t listen to it, so there’s no need to disparage artists. Specifically, he means: “All artists, from techno to pop to punk – we’re all for Peace, Love and Harmony, but they all have a very narrow narrative when it comes to their music. Rappers who exclude techno. Even within the techno scene there is this separatism. Commercialism versus underground, etc. It’s paradoxical. You’re actually standing for the good of the world, and on the other hand, you’re discriminating against other styles – or even sub-genres of your own.”

Dave Grohl, the drummer of Nirvana and band founder / singer of the Foo Fighters, would have disappointed him a lot: “He’s one of my really big heroes, and then I read this interview, where he ridiculed techno productions. That’s not real music. I can only say: If you diss an art form that conveys the same values as rock’n’roll, you’re missing the point. Music in general stands for tolerance – and you should live that, no matter what department you’re in.”
Oliva adds that “you’ve lost anyway if you put something down to put yourself higher.”

We can only agree with that. And it is also because he lives by this credo that the southern Italian is both successful and popular today. People enjoy working with him, he is hugged and pressed by countless collaborators and artists during the interview, people are obviously happy to see him and enjoy his presence. How is it the other way around? “I love Ushuaïa and every single person who works here. It is the most professional and human environment you can imagine. I’m grateful to be able to experience it.”

As well as one of the highlights of his life: “I am very fond of soccer, ardent AC Milan fan and had the honor to DJ and join the celebration at the championship party at Domo a few weeks ago. I played football myself for a long time, so you can imagine what that means to me. One of those moments in life that I will never forget. Just like the one eight years ago when Ronaldo, my AC Milan hero, suddenly stood in front of me here in Ibiza, pulled out his cell phone after a few words and showed his playlist in his cell phone – with my music on it! I was stunned. Since then we are “Best Friends” and he often comes to my gigs – tonight too.
Will you stay with us here at the Ushuaïa Club?”

Of course I stayed – and have not regretted it. Thank you for your generous hospitality dear Andrea.