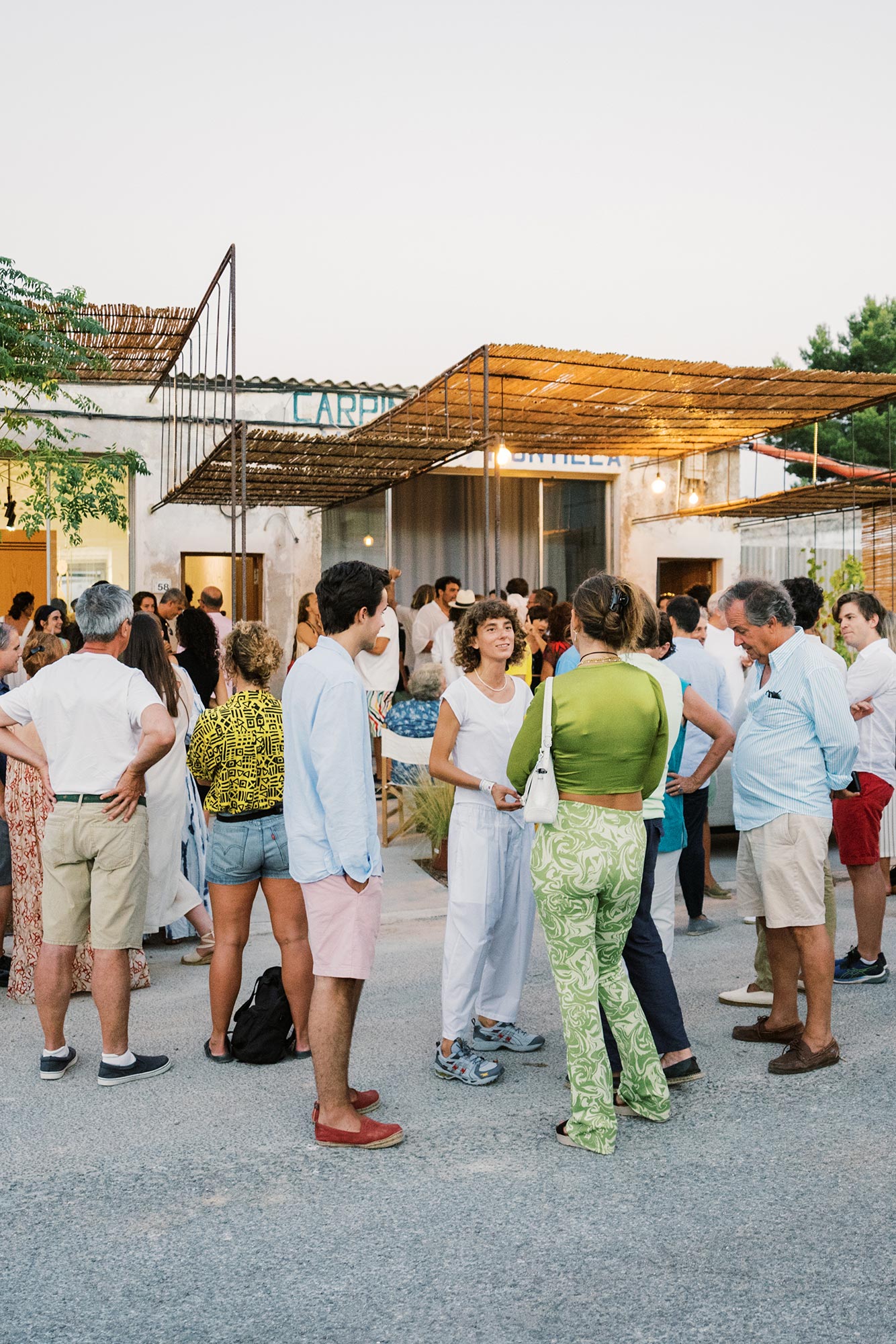 Ibizan Ángeles Ferragut comes from the theatre, but a few years ago she decided to embark on an exciting adventure with her partner Simon Southwood, bringing a series of artists to their finca on the island to observe their creative processes. This is the seed of Ses Dotze Naus, an artistic project officially established as a foundation in February this year. “Perhaps not coming from a visual arts background, I am very interested in the process itself, and my way of understanding it has been to talk a lot with the artists. Emphasising the process is important and trusting in the transformative power of culture, always very ‘forward looking’, not in the sense of changing or going against, but going in favour of the elements of the island, of the attraction that it is”.

This is how the artistic residencies of 2016 and 2018 came about, lasting two and three weeks respectively, which featured some local artists, such as the painter Jesús de Miguel and the architect Marc Tur. The first was what she describes as an experiment: “We did it in the house where we live, we housed them in tents in the forest, we sent the donkeys out of the stables and there we did the studies”.

“Prelude” is an exhibition conceived as an epilogue and prologue to this inspiring artistic project, with a selection of the pieces created during those two residencies that serve to contextualise the project and tell its story. The exhibition, curated by Fernando Gómez de la Cuesta, can be visited this summer at La Carpintería. Ángeles explains: “Preludio was a consequence of the space, of the fact that it was so well received and had so much energy. We decided to start by reflecting backwards: how we started, where the motivating force is, what the DNA was, the heart and the principles of the project are. So we came up with this exhibition, which has worked very well, to be able to tell a lot of people about the project. We had to get on the summer train, we had to take advantage of the opportunity”.

But this old building located in the most remote part of an industrial estate on the outskirts of Ibiza town, a singular space with an underground touch that seems to be at the end of the world, is not really a gallery, but was originally conceived as a workshop, as a place of production and work: “We wanted to inhabit La Carpintería as a space where things happen”. This is where the young artists who came to the island this spring to take part in the latest residency they have organised, “Figueretes 2022”, created their works.

La Carpintería has also hosted various workshops run by the artists of “Figueretes 2022”, meetings with creators and cultural professionals from the island, and events as peculiar as the testing of a prototype of a womb. During the month of August it has also hosted “Taula 01”, an exhibition that has shared space with “Preludio” and for which they invented a mobile curatorial device, a table that acts as a demonstrative, expository, pedagogical and dialogical element that can be placed in the most unusual places and with the most unsuspected contents. “The idea is that it flows and accommodates our artistic proposals or those of other artists, curators or agents, a workshop, a dinner with a chef… it is very versatile”. The table has been designed by Vito di Rosa, an architect from the island focused on environmental projects, who has reused some industrial trestles found during the refurbishment of La Carpintería. “Taula 01” arose from the desire to work with local artists, and the fact of choosing to show the work of ceramists from the island is a little reminiscent of this idea of more primitive craftsmanship. The inauguration of this exhibition with works by Anneliese Vitt, Elena Noguera Wilson, Inés Ventós, LADIO Ceramics, Marina Marón and Natalie Rich-Fernández was a social event that brought together some 200 people in this secluded corner of the Can Bufí industrial estate.

For the beginning of 2023 and under the baton of the foundation’s executive director and cultural manager, Ignacio Santos, they are preparing a new edition of the “Figueretes” residency, with the participation of several international artists and a programme of activities open to different audiences. They are also planning new editions of “Taula” throughout the year, with some calls specifically aimed at creators and cultural agents on the island, and another large exhibition during the summer at La Carpintería. In addition, one of its most ambitious programmes, conceived and inspired by the relationship between humans and nature, “Finca”, will be launched. So far this year they have planted 730 fruit trees because it has a regenerative agriculture and permaculture aspect. The idea is to gradually build from the ground up a space that combines landscaping, architecture, agriculture and art, with permanent pieces that can be visited and, in line with their usual way of working, developing various programmes around all of this.

These are just the first steps in an exciting artistic project that we will no doubt continue to hear about and whose DNA is inspired by Ibiza’s undeniable capacity for welcome, embracing the different cultures, people, thoughts and questions it receives, and will to contribute to continuing to make the island a place of creativity and creation.