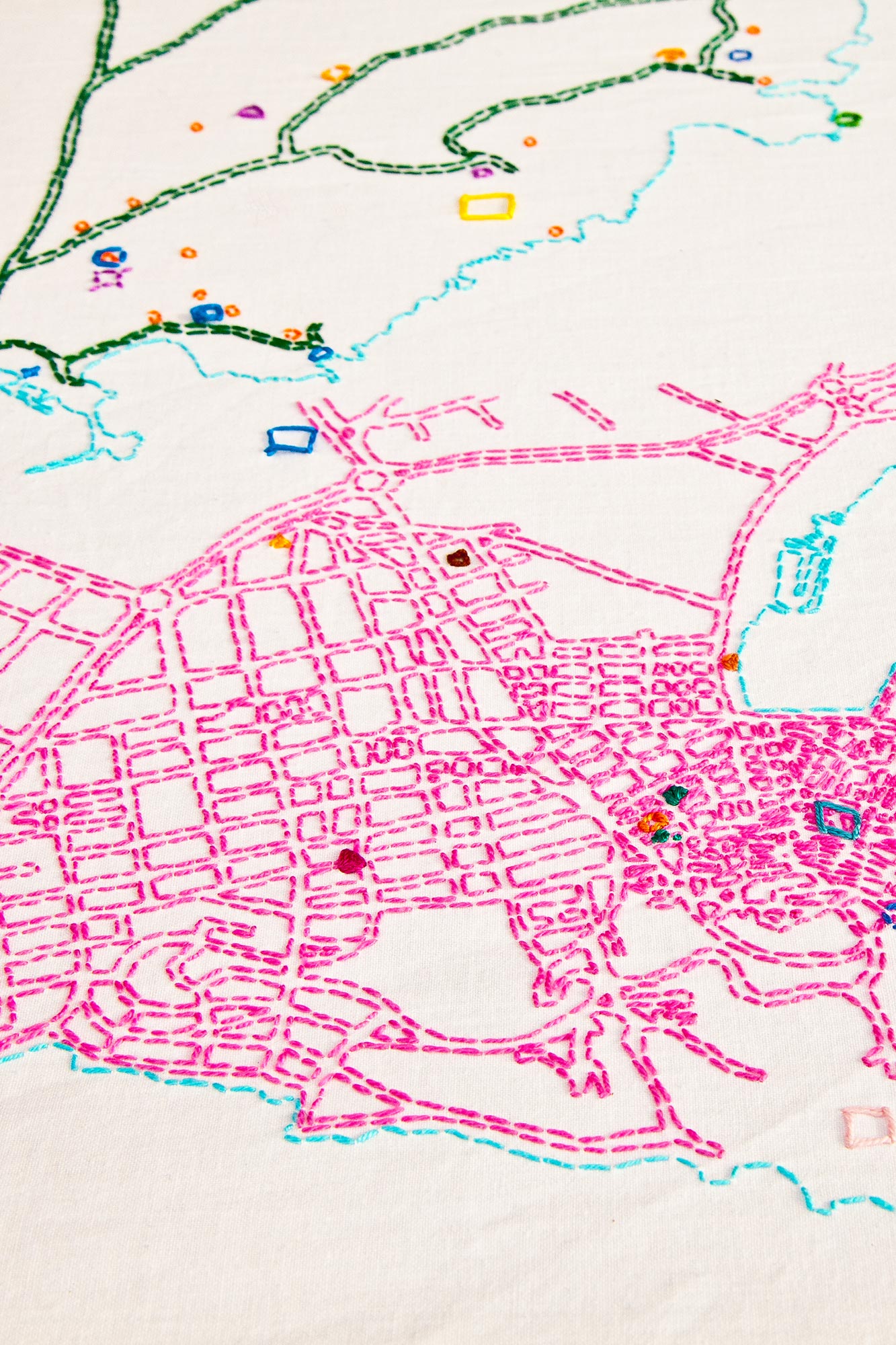 “Tejido urbano” – Liz Kueneke, an artist with an unusual project

Liz Kueneke is one of those people whom it is worthwhile getting to know since she brings a different point of view. It is as if she had lent you her glasses and, wow! you see the world in a different way. She is genuine and deep. Born in Chicago, she has lived all over the USA, Ecuador, France, in Barcelona and, for more than a year now, in Ibiza. She confesses that ever since she discovered the island, she hasn’t wanted to live anywhere else.

Her desire to discover the relationships that people have with our environment and curiosity to learn about new peoples and cultures have led her to create Tejido Urbano, an interactive initiative, made with much artistry, in which the participants sew their stories onto maps embroidered by Liz.

The Tejido Urbano of Ibiza began in 2011 and will come to an end in a few months time with an exhibition. Up until now more than 400 people have taken part and the maps embroidered by Liz have been shown in Ibiza, Santa Eulalia, Benirrás, San Miguel, Punta Arabí, Es Canar, Es Cubells, San José, San Antonio, Sant Jordi…and continue to fly.

Liz has embroidered the maps of Formentera, Ibiza, Ibiza town, San Antonio, Santa Eulalia and a mapamundi. She travels around the Pitiusas with her frame at the ready so that anyone who wants can illustrate with colour backstitches those locations that left a mark on their lives. Each stitch is a love story, an adventure or misadventure and she keeps them all in a notebook.

This highly inspired artist does not travel with a “Lonely Planet”; she moves around the world with her notebook full of notes about backstitches which open up to her magical spots that do not appear in any guide for travellers.

In conversation with her, we have discovered a new form of learning about the four corners of the world:

What inspired you to do Tejido Urbano?
I have always been interested in the hidden meaning of the nooks and crannies of the cities in which I have lived. My interest is based on the relationship that people have with their surroundings and in visualizing what cannot be seen, what is intangible…and Tejido Urbano is the result of that curiosity.

What do you hope to achieve with this initiative?
I want to offer a hands-on experience to the inhabitants of Ibiza that allows them to reflect on their own use of space. To inspire people so that they feel responsible for their surroundings and to promote dialogue about Ibiza, about how to change or preserve the island in a positive, beneficial way for its inhabitants. To compile and process information about those places that have to be conserved, those that have to be altered or improved…and, of course, also to learn which sites are magical for some people.

In what way is the Tejido Urbano of Ibiza different when compared to that of other places?
It is the first time that I have done this in an entire province which includes urban and rural zones. It is not limited to one place alone but, rather, a whole island. This brings greater variety. What is more, there are many people here from other countries and that is why, for this project, I have embroidered a map of the world so that those people can associate places in Ibiza with their places of origin.

Are the people of Ibiza very different with respect to the rest of the world?
I have been surprised to find out how open people can be both in Ibiza and in the other cities in which I have set up the Tejido Urbano. The funny thing about Ibiza is that there is such a range of nationalities, that I have seen a mix of reactions like a compendium of the attitudes that I have observed all over the world.
For example, in India the men took part and sewed without any problem whatsoever. In Ecuador, on the other hand, the men were reluctant because sewing is something that the women do there. Here I have come across both attitudes.

Do people tell you their stories or just sew them?
I always ask the people taking part the reason for their embroidery. It is always the most interesting thing for me, the stories that are concealed behind the spots marked on the map. At times they tell me very private things about their lives; at others, they reveal to me places on the island which I have never heard about.

The history of Ibiza is written in many languages, it is what makes this place so special, so free, but it is people like Liz, people with vivid imaginations and the desire to form part of the local culture that have forged the legend of the white island’s magic. Let’s hope more such people come who want to enrich and not exploit.

If you wish to leave your mark on the maps of Tejido Urbano, find out where and when on her Facebook page where you will also be able to see lots of photos: