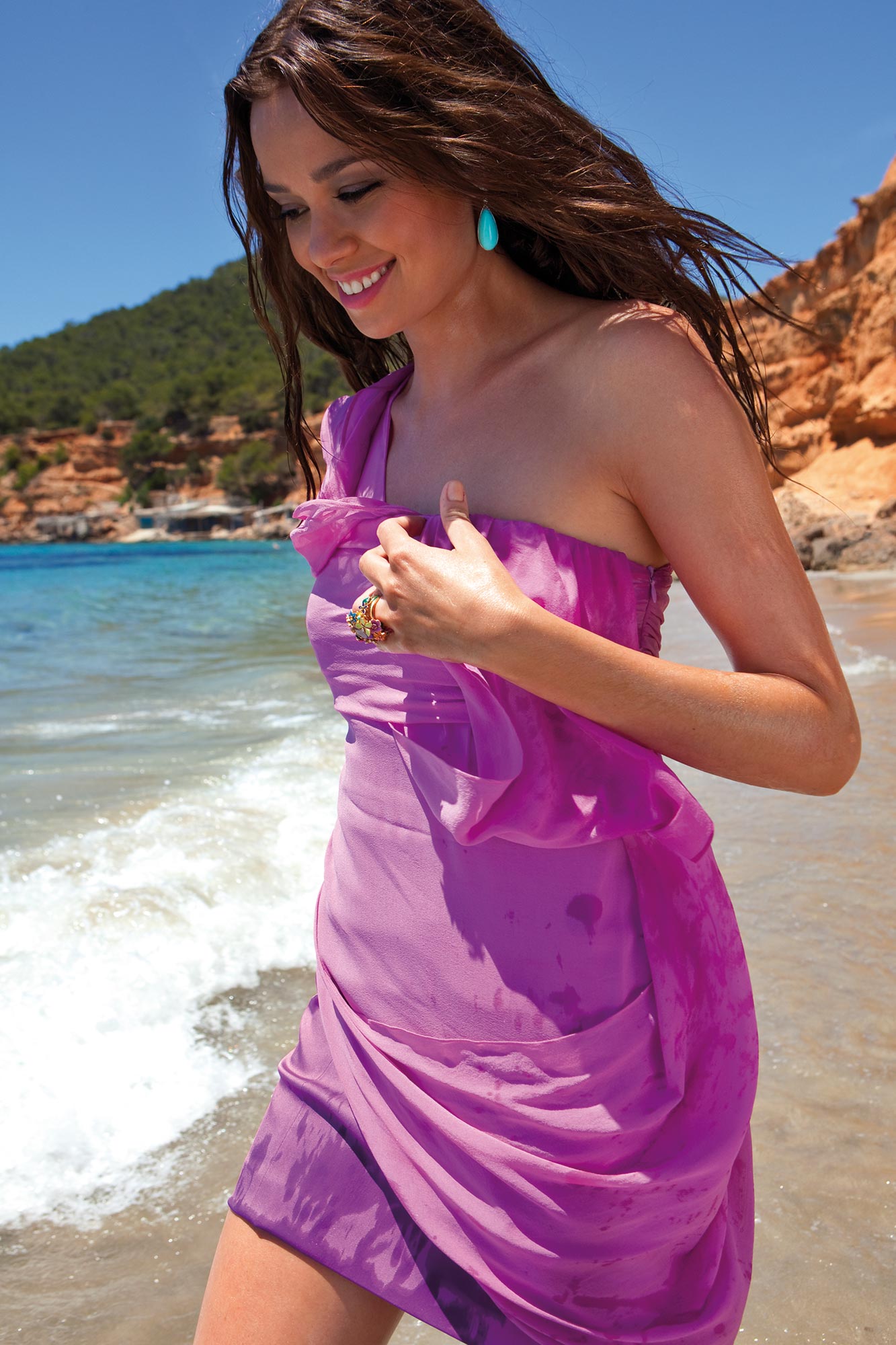 Dafne Fernández (Madrid, 1985) isn’t a normal girl given that she has already made more than ten films and TV series and has been on the front cover of many magazines; but nor is she just any ‘starlet’ since she wouldn’t mind earning a living playing poker, she loves football and has a beer on finishing her photo session. And although she has already been to Hollywood, she still feels moved when talking about Fuensanta, her first role with Antonio Saura.

Bill Murray says that actors charge a lot “for being so far from home; because it’s sure not for acting”. What’s your opinion?
– While they are filming, I think we get paid for waiting because most of the time we are in the dressing room. But I spend months preparing for the role which is a part that nobody sees but which is very important for a minute of acting.

You began when you were only 12 years old…
– In fact, I began at eight. I started doing advertising among other things.I did the ‘Back to school’ campaign for El Corte Inglés and when I was ten I did my first casting for ‘Malena es nombre de tango’. I went to audition, they chose me and that is where my acting career began. When they put me in front of a camera I was very nervous but when they said “Action!” everyone else seemed to fade away and I felt so comfortable that I told myself “This is what I want to do”.

Were you born an actor?
– I am an actor by vocation. When I was small I played at making a theatre for my family or a dance for my grandparents on Sundays. I can’t imagine myself doing anything else.

What do you remember about Fuensanta, the first role you performed with Saura?
– Fuensanta is one of the most pleasant experiences I have had in my life and the first one I had in the world of acting. Firstly, because of working with Carlos Saura who gave me a lot of freedom in spite of being very demanding. What is more, I filmed with Paco Rabal, Juan Luis Galiardo and Eulalia Ramón. But, above all, I remember it because Fuensanta is a magical girl in many ways and it opened a whole new world up to me. Thanks to that role I’m still I’m still in the fight; on many occasions the thought of Fuensanta keeps me going forwards.

Starting off with one of the greats such as Saura, did it scare you or remove the fear forever?
– I am always afraid even if it is just one phrase, it’s the nerves that come from wanting to do it and wanting to do it well, all sorts of sensations that get the adrenalin flowing that gets you up onto the stage and that I love.

You started off dancing at three years of age; do you remember what you felt then when you danced?
– I really liked dancing as I could improve each day and there were other girls striving for the same thing as me. Competition is a drug that really hooks me.

So, you’re competitive?
– In a healthy way, yes, because I want to absorb everything they are giving me to improve. The things I like are those in which I can always improve.

Right now, do you consider yourself to be a dancer, a model or an actress?
– I am a dancer and I act, although it’s acting that most satisfies me now. If I get to dance in a performance then that’s the absolute maximum.

What does dancing bring to your style of acting?
– Being very demanding, perfectionist and disciplined

Do you still dance?
– (Laughter) In the discotheques… play me music and I’ll dance.

What projects have you got on the go right now?
– They are showing Sexoenchueca.com, a series filmed on a very low budget but in which all sorts of factors have come together so that the project could go ahead. I play a very funny character which is something I haven’t done before, a really naive girl, a bit simple, someone who says the first thing that comes into her head and believes everything people tell her. She needs lots of love and she screws anything that moves: not for the sex but rather because she falls in love straight away. Then there’s Malamuerte, an independent art film about to be released and I am going to film some scenes of Gerardo Olivares’ Entrelobos, a very short role but pero Gerardo, I’ll be playing Pizquilla.

Television has made you famous, what’s your opinion of television at the moment?
– Television for actors is experience, learning a lot and getting to meet very interesting people, although I have seen that when you are on TV people recognise you and when you aren’t, they don’t recognise you so much. I’m not going to give my opinion on current television because it would be like shooting myself in the foot.

Is there any moment when you would like to have gone unnoticed?
– I love being acknowledged for my work, when they say things like “Dafne, you’ve done a great job”. What I don’t like are the people who interfere in your private life: that is the thing I don’t enjoy about being famous. They never ask me about my private life in a supermarket, the people in the street are much more respectful than many professionals.

What do you think of the fact that it is the celebrity gossip programmes that set the standards of fame now?
– It isn’t going to last very long, it hasn’t got a solid base. I know that at some point in the not-too-distant future these kinds of programmes are going to have to disappear.

But have you never used the fact you’re well-known to get a seat in a restaurant?
– (Laughter) Well, to tell the truth, I have jumped the queue now and then.

Many people think that models are thin because they don’t eat. I have watched you enjoying paella and a beer. Do you really eat anything you feel like?
– My metabolism is amazing but there are times when I have to stop. In any case, I think beauty lies in imperfections, what is special about people is in their differences and you have to be happy with the way you are.

What makes a normal day?
– When I have a bit of free time I do paperwork, give acting classes and try to use the chance to be with my friends. When I’m working, I disconnect and live only for work, I ignore everyone so when I have got some time, I make the best of it to improve as an actor and make up for lost time with friends and family.

What do you do badly that you would like to do well?
– Paint, when I was little I would like to have been a painter, I always envied Antonio Tello’s drawings in ‘El Capitán garrapata’.

Will you return to Hollywood?
– I have a project there that still has not come out, one more super production waiting for the financing. It’s been on hold for three and a half years but I got into it when it was the idea of a single person and now there is a good team to go ahead with it.

We saw you here in June (playing in the parallel poker tournament) and we were left with a doubt, what music do you listen to while you play poker?
– The truth is I don’t pay any attention to music and that’s bearing in mind that sometimes I am playing and singing at the same time. I take the headset to escape the pressure of my opponents looking at me.

You must be used to doing photo sessions in all sorts of places, what did you think of Sa Caleta?
– Marvellous, it’s an idyllic place I would recommend to everyone… well no, don’t come (laughter). It is one of the nicest beaches I have seen. The fact is that when you step onto this island, it changes you, everything is positive, everything is alright and carefree…

What memory are you taking with you of Ibiza?
– I’ll keep the people, they’re charming.