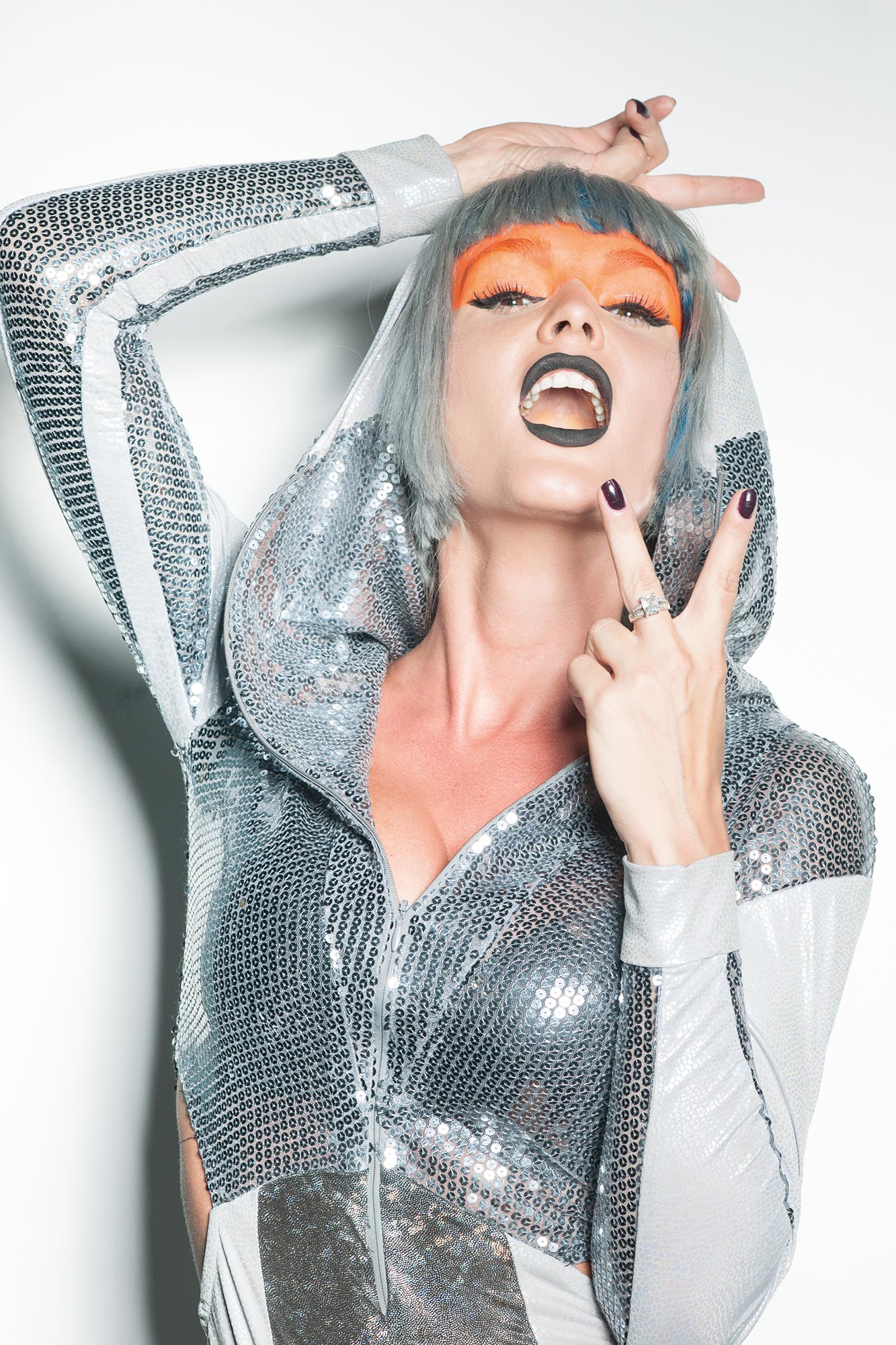 Today I am privileged to be exploring one of my teenage alter egos, I’m here to talk to four young Ibiza dancing nightclub starlets – Kamila, Inma, Maite and Lauren about their life and longings. These girls are making shapes at some of the world’s finest nights but what interests me is not just their obvious beauty and style – but how quick and clever they all are, not only in their moves but with their chat. I mean you have to be pretty streetwise to leave your hometown and get paid for doing something that all young people want to do in their spare time, dance to great music. Right?

Meet Kamila Moraczewska, out-worldly and magnetic…her little sister calls her Alien. She models and once represented Poland in Miss Universe. She left her home country at the age of 21 to live in Dublin, opening her own business and creating mystery-dining experiences for restaurants and bars there. Her philosophy in life is to take on a new adventure every six months.  This is awe-inspiring considering Kamila was once in a plane accident…“when the engine blew out, we were falling down in complete darkness and without any power for a few seconds before everything went back to normal and we emergency landed. I went to hypnosis so I wouldn’t be scared of flying after that.” She says like it happened to someone else.

In June 2013 she felt like falling down a new rabbit-hole and booked a one-way ticket to Ibiza. “I had to find a job as I didn’t speak Spanish and the easiest way was to become a dancer”. At first it wasn’t easy as she didn’t know anybody at all, but her life is now very different three seasons later. “I’ve met so many incredible people and Ibiza has become my second home. I have danced in Space, Amnesia, Ushuaia and Destino whilst my last two winters I spent in London dancing. I really enjoy my time here and I’m always a bit sad when the season finishes and it’s time to leave.”

Chances are, if you like to party and appreciate house music, you’ve danced into the wee hours of the morning at the clubs Inma Lopez is busting moves in. Originally from a small Spanish mainland village of two thousand habitants where everyone settles into a marriage in their early twenties, Inma discovered Ibiza on holiday and decided she wanted to stay. “When I first came to Ibiza it was a complete surprise for me. I had heard thousands of people’s experiences about the island, the parties and crazy people here…but I found something much more than all that. Here is a little family for me doing what I love, it’s truly my passion working in clubs like Pacha and Space”.

Behind her Blondie rock looks and hot Mediterranean mouth Inma admits that she’s in fact really shy “but is working on it”. She enjoys studying and is currently doing psychology and will be finished her course in a few years time. Her biggest inspiration is her grandmother who was “a really, really good dancer many years ago”.

Exotic and active, Maite Leiva Stietz has explored many disciplines such as gymnastics, synchronized swimming and dance whilst growing up in Buenos Aires.  She describes herself as a “searcher and experimenter”, always reaching out to new people and places in both her training as a dancer and also studying singing and theatre. “I decided to travel to Spain for three months, first in Barcelona and then my first season in Ibiza. After this I received the offer to work as a Gogo in the best clubs in Barcelona five days a week and that was when I decided to stay living in Spain, resuming my jazz classes and various styles such as hip-hop, Waacking and Femme Style. I love working in Barcelona during the winter and Ibiza in the summer. After finishing this great season where I’m dancing in the hottest clubs and festivals such as Cocoon, Hyte, Glitterbox, Elrow, Vagabundos and Nassau Beach, I want to travel around the world and get to know new locations.”

Outfit courtesy of Cocoon (designer The Gypset Diary), wigs by Elia Martine Quesada, hair and make up by Lander Rodriguez

Ireland’s Lauren Hope Sullivan is also trained in many different dance styles from hip-hop, gymnastics, freestyle disco and Irish dance, competing in many competitions in her home-country. She even learnt how to play with fire – breath fire, eat fire and stilt walk! She loves Tech House and her favourite DJ’s are Loco Dice, Richie Hawtin, Tale Of Us and Richy Ahmed. Her stunning, slightly Megan Fox features, are balanced beautifully with her athletic physique and distinctive tattoos. She loves to take risks and in 2013 sold some of her prized possessions including her car…and three weeks later was living in Ibiza. She takes inspiration from people who “do what they want to do with their lives.”, envisages travelling and dancing in the most beautiful places on the planet and is literally living her dream.

And looking at these girls, it does sound and look like a whole heap of fun.