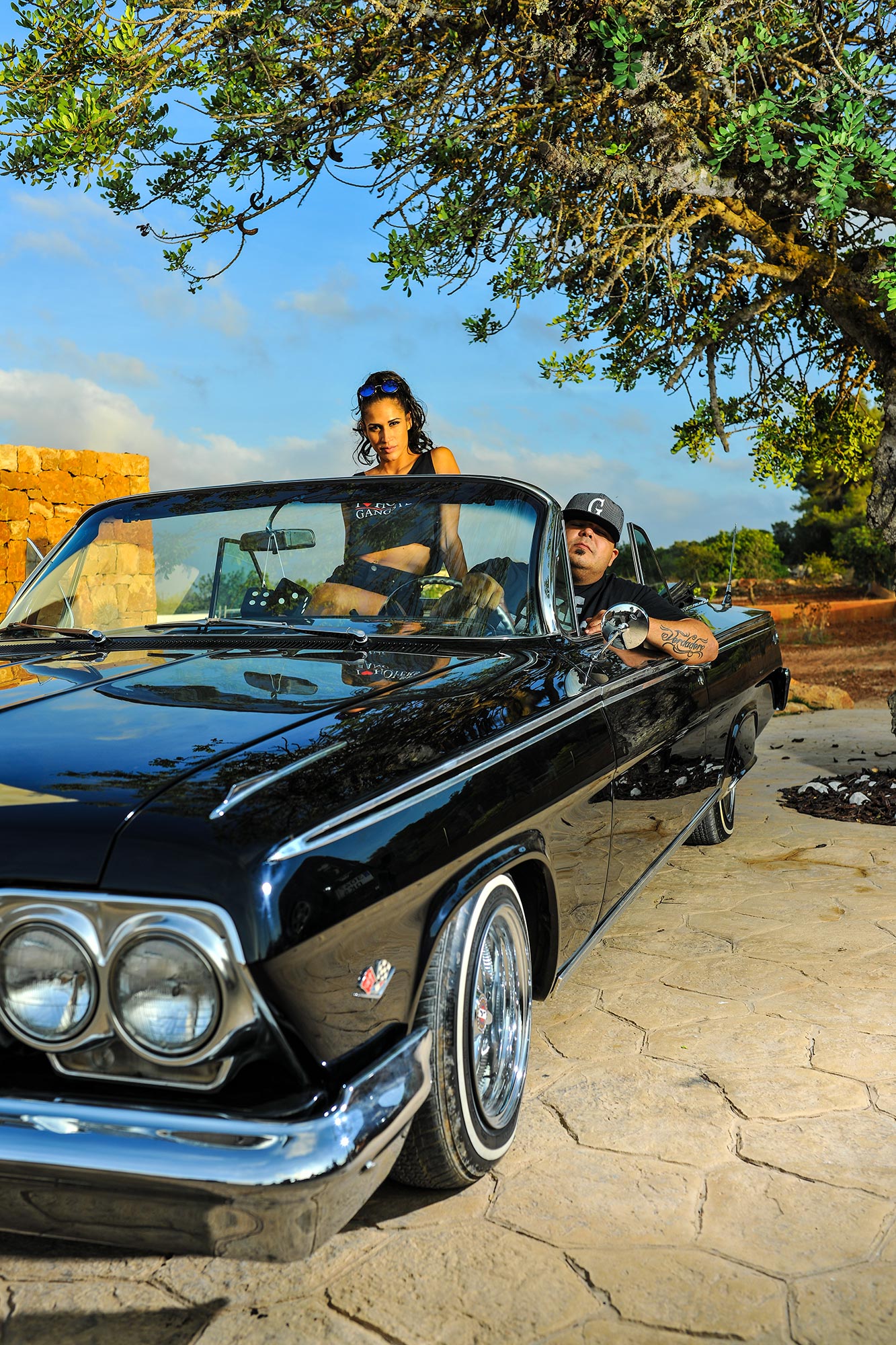 Driving through the scorched fields of the campo looking for the house of Sneak, I know I am not going to get lost – there aren’t too many places on the island with a beautiful low-rider sitting in the driveway. “There is nothing cooler than an Impala with some bounce, I’ve always dreamed of having a beautiful classic car and when I saw this in Los Angeles, I just knew I had to ship her over. Now I can cruise around this crazy island my way.” The man you have to admit has Ibiza Style.

The clock is just ticking towards midday yet the thermometer on the wall is already touching 90 degrees as we settle down to talk, but Sneak is cool. Super cool. It’s funny to think that I am in the company of a guy who to put it bluntly, loves to fuck off everyone in the world on social media who he has an issue with, just when he feels it’s gone a bit quiet out there and things need stirring up.

“He drives me crazy” says his wife and manager Melissa who wanders out with some drinks. “I’ll be in the office working away and all of a sudden I’ll receive half a dozen messages on my computer from magazines around the world asking for a quote from him about the latest Twitter argument he has just started. I’ll jump up and scream down the stairs ‘what the hell have you gone and done this time?’ And he just laughs back at me.”

Over the years our main man has ripped into everything from superstar DJs whose music he dislikes, technology making it too easy for nobodies to spin, huge nightclubs he feels have lost the plot and lazy festivals organisers pitching unmatched DJs in back to back press glory sets…

“I have been playing Tomorrowland in Belgium for five years and I love it. But this year, Eats Everything vs Derrick Carter and Mark Farina vs Seth Troxler? What the fuck? It should have been the other way round pairing wise. Myself and guys like Farina and Carter helped start the whole back to back style, so why are these promoters now putting complete opposites together? They are just hoping for some weird shit to go down and get some mad media attention. I don’t want to be a dick and I don’t want people to think I’m a dick, but certain issues in our industry have to be raised. It’s crazy how many people come up to me and say how much they love my opinions and that there should be more people in the world like me. So fuck everybody if they don’t like it. I will not stand for stupid shit.”

Have you always been so outspoken I ask, does this date back to your school days? “Dan, I have never been a bully dude, always the opposite. All the mother’s would be like ‘I’ll buy you an ice cream honey but will you just look after my kid at school please.’ So I would be the big guy with four little ones around me just giving out the ‘don’t mess with my homies’ kinda vibe. Just to get that ice cream.”

As I chuckle at one of my favourite producers on the planet ranting off, his four year old daughter skips out towards the pool and I remind Sneak that the last time we spoke in 2014 she would sing Beyonce’s ‘XO’ to him on the way to school every day. Has she gotten into the DJ Sneak vibe yet I ask? “Heh heh. Only the other day her mom was in the kitchen with some pop shit blaring out and she went over and said ‘can you put some of daddy’s music on now please?’ I think she’s getting into the Gangster groove already…”