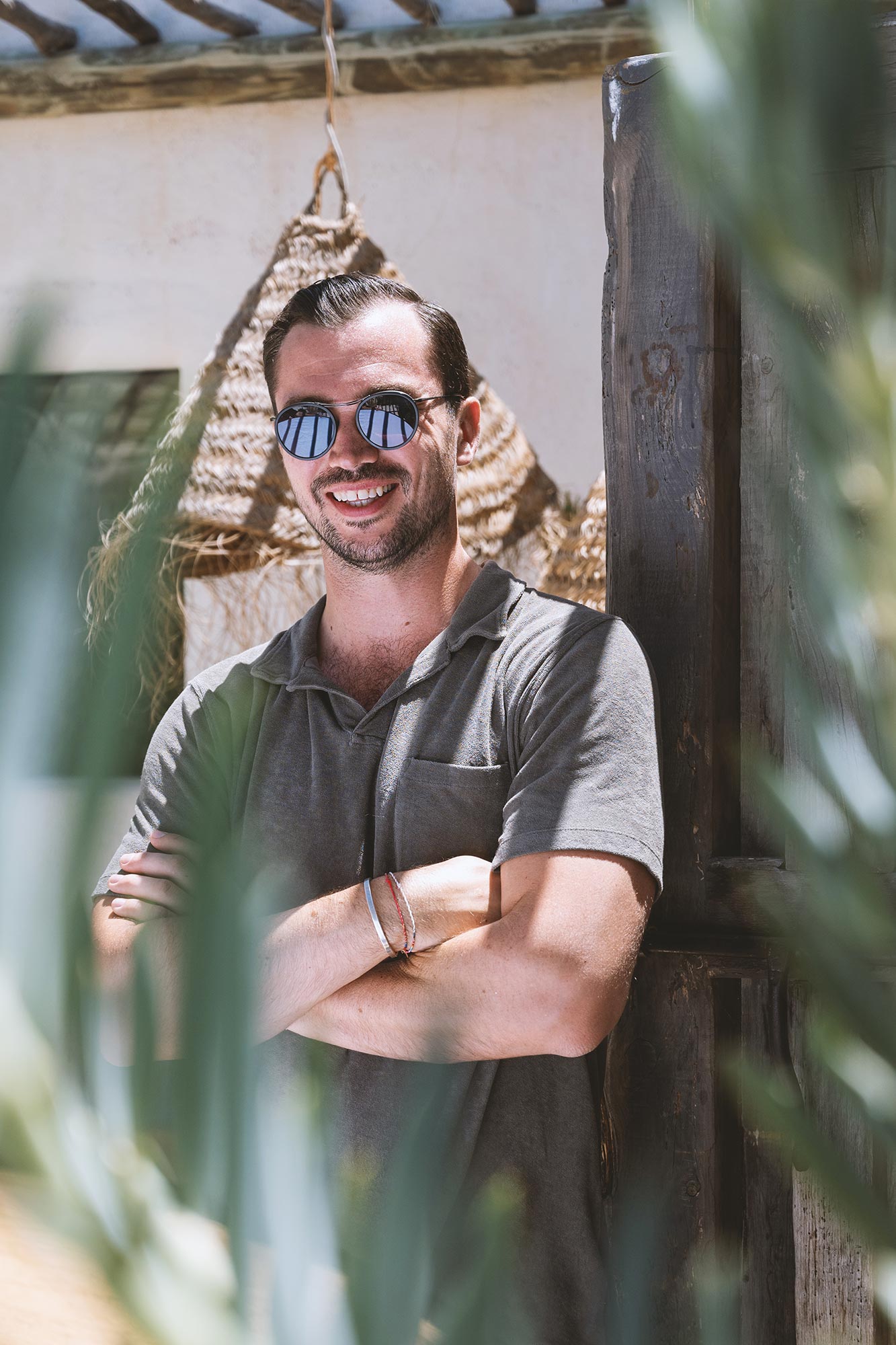 Alexander Beulich was born 20km from Frankfurt, in Königstein in Taunus. A curative spa town with a top ranking in Germany’s purchasing power index, peppered with some of the country’s most expensive and exclusive real estate. Flamboyant ambience, art nouveau apartments and stately villas characterise the townscape, which will have a lasting influence on the 31-year-old. Although he says, “I grew up in the big city, I’m a Frankfurt boy. This multicultural climate was crucial for my personal development. I get along with all cultures and types of people.” The real estate developer is currently finalising the extraordinary Hippiements construction project in Ibiza with his business partners Thomas Oellig and Peter Germann.

To understand the project and Beulich’s thinking, let’s go back to his school days. Even then, while his classmates played Playstation, the teenager delivered newspapers. And later, at university, Alexander’s fellow students drove their own cars to class, and he chauffeured people around by cab at night. “Because I wanted to earn my own money, I went my own way – and sure, that was sometimes met with incomprehension. But I simply didn’t want to be on my parents’ pockets,” he recalls.

Beulich appears for the interview elegantly dressed in sportswear, a dark blue shirt, and seems well-balanced. Calm in himself. Clear in his speech. A leader. He realised early on that hard work and a strong work ethic lead to success. The first time was when he joined a soccer club, relatively late, at the age of 17. Others were naturally much further ahead, especially tactically. Alexander quickly caught up with the aforementioned predicates and kicked his way from the district league to the state league within just one year – as a center forward.

As always, when Beulich really wants something. If the parameters are not one hundred percent right, he withdraws or reserves his energy for what he sees potential in. The latter is one of his great talents – he knows where his commitment is promising and where it is not. A good example is his short study visit at the Goethe University, which he stopped after half a year, because he realised that the offered learning content will not bring him further. Just like the internship at a renowned management consultancy: “I realised that I’m not the suit type and would have preferred to swap this outfit for a construction helmet. Away from theory, out into practice. Because hey: doing is like wanting – only crasser!”, laughs Beulich, adding that he later earned a “bachelor’s” degree at a practice-oriented university.

This penchant for lived consistency is one of his success factors: “I pursue my goal by any means necessary, often stubbornly and doggedly – you have to be consistent when you’ve decided on something. That’s part of our team success formula that we swear our team to.” 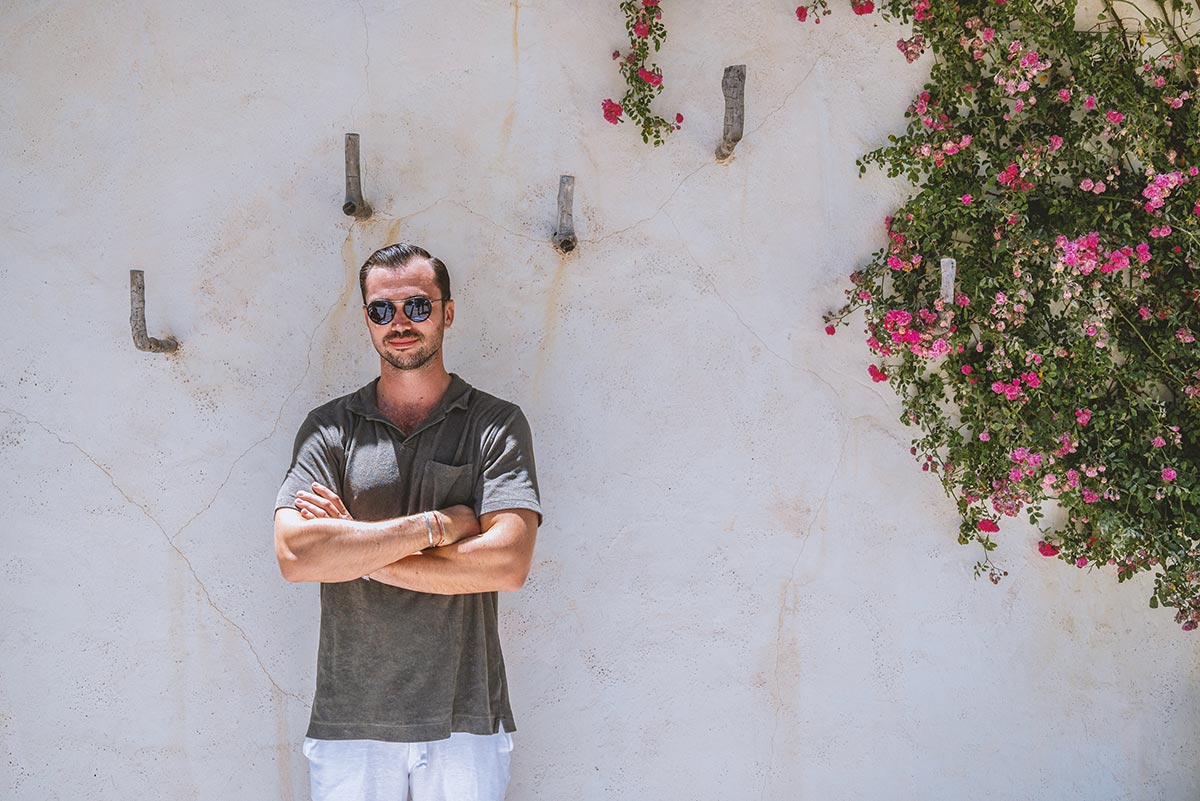 “Building houses is something I’ve always wanted to do,” says the entrepreneur. He had been taught the ropes by his “foster father” and business partner Thomas Oellig, a real estate luminary in the Balearic and Frankfurt areas. “You’ll laugh, but Thomas comes from a mining background and taught himself everything to the greatest possible extent – and later passed on the knowledge to me. We have a distinctly good spatial imagination and vision. Especially when we, together with our technical managing director Peter Germann, experienced architect who has already worked for Zaha Hadid, stand on a plot of land, the three of us know immediately what belongs there,” says the Eintracht Frankfurt supporter, to explain further:

“Domus Vivendi is rooted in Ibiza. Thomas emigrated to the Balearic island 33 years ago, met Silvia, the former sound engineer for musicians like Mike Oldfield, there. The two married and had sons Max and Leopold, who graduated from primary school in Ibiza. In 2009, they then moved to Frankfurt with the boys and moved the main business to the area. Through my father’s contact, I was allowed to do an internship there, was hired directly and today I am the managing director of our company – with forty employees by now”.

Did that go well right away? “Of course, I was thrown in at the deep end when I was 18 and probably sold myself quite well. I continued my education part-time, including business administration, to further my development.”

Without a degree in architecture, which is remarkable considering that his business partners and he have to discuss and implement their ideas with top engineers or architects. They have their own methodology and jargon.

“That’s right – and our daily challenge: bringing technology, visions and sales together. We create ideas, develop them further in our heads, put the creation on paper – and then as accurately as possible into the thinking centres of our engineers and architects. Currently, our business model results in a current total project volume of around half a billion euros.”

Speaking of money – how do you finance such projects? “We have become capital-strong ourselves after the many years, but we also have a pool of investors and don’t have to look for new ones for every project. In addition, we have strong banking partners who represent financing lines for us. Of course, we could do everything with our own money, but that would be less of everything. We wouldn’t be where we are today.”

Namely, not only in Frankfurt, but also in Mallorca, where thirty employees now work in the office building designed and built by Thomas Oellig himself (about 8000 sqm ). “It took us a total of two years to build this super-modern business center, which is unique in Mallorca,” says Alexander Beulich, showing the premises.

He is also proud of the new Ibiza project: Hippiements are causing a stir in the Balearic real estate scene right now. How did it come about?

“The idea came to us because of our great affinity for Ibiza and the very special vibe here. We wanted to bring the Elements product line, which has been successfully established on the sister island and stands for apartment complexes of absolute high-end quality, to Ibiza by incorporating the elements of fire, earth, air and water. Here we have fire features, green vertical gardens, water is mostly in front of us anyway, because we have sea view, etc.. For this we have combined `Elements` with `Hippie` – Hippiements.”

What makes Hippiements? Alexander Beulich: “Top style – and above all quality, combined with the Ibizan hippie flair. Everything a bit cooler and more casual than on Mallorca, where it’s mainly apartment that you sometimes use for half a year straight. Hippiements units, on the other hand, are suites, with concierge, spa, pool, gym, the works. These are real weekend hideaways named after icons of the legendary Seventies hippie era: Jimi Hendrix Penthouse, The Who Suite, Led Zeppelin Suite, and so on. This is the first product line we’ve built since Thomas left the island back in the day. 63 units in total. They’re going to be done this year, we’re in the interior construction phase right now.”

What basically sets Domus Vivendi apart as a company? What is the USP, apart from the design? “We build in German quality and deliver corresponding service. Together with the wealth of ideas and our creativity, we have a unique selling point here.”

Which is why people are literally knocking down the doors for Alex, Thomas and Peter: “70 percent have already been sold,” says the 31-year-old, who is certain: “We will do more, but not at any price. The properties and the surrounding area have to fit one hundred percent so that we can live up to the brand and the claim. And that may take a little time.”