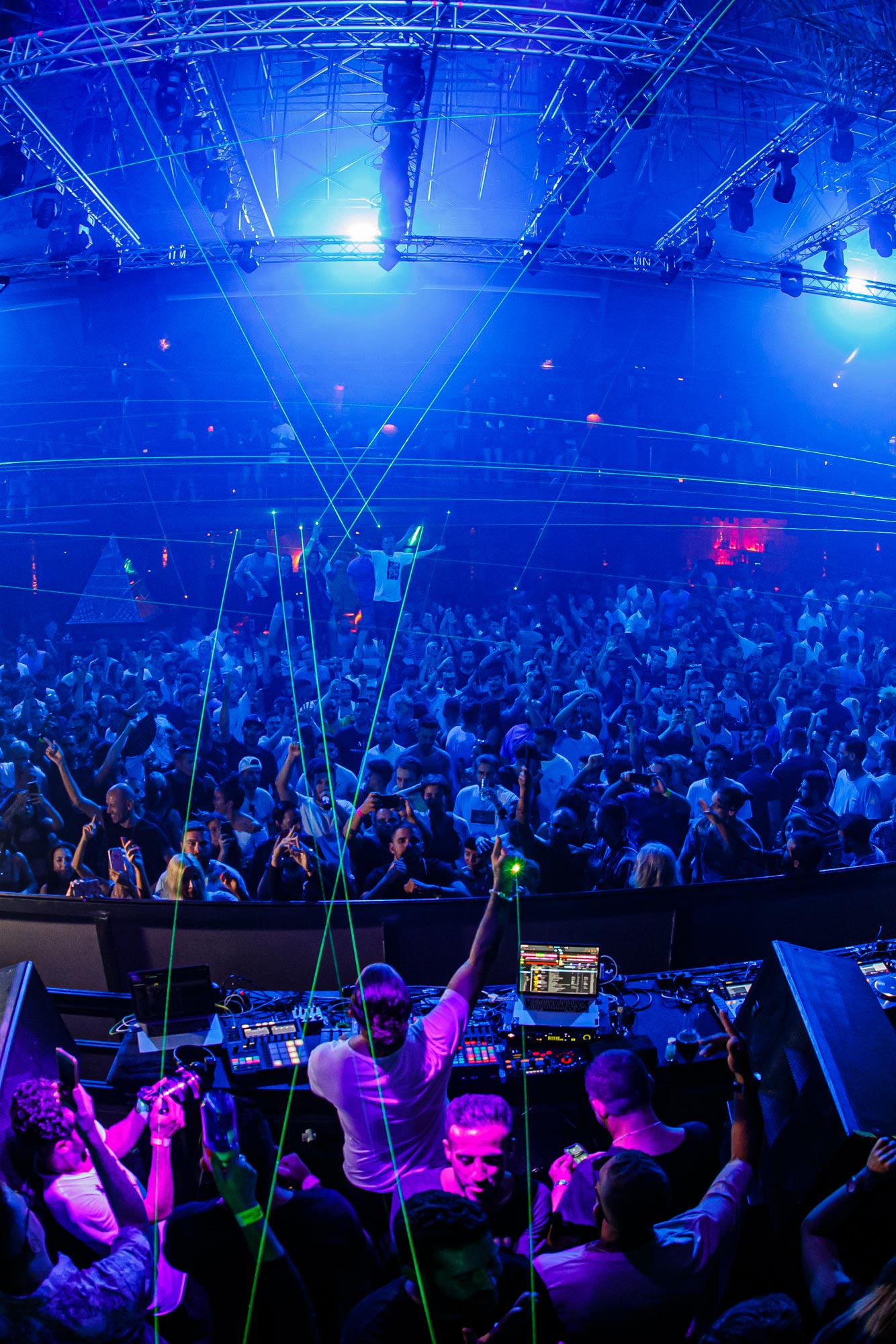 One of the most wonderful things about Ibiza is that the island is a true melting pot for creative and artistic people. And one of the most wonderful parts of our work here at Ibiza Style is, without a doubt, to hear their fascinating stories. The one you are about to read is a remarkable tale; one of friendship, adventure, incredible successes and, most of all, an undying passion for music.

Set against the colourful backdrop of the 1980s and 1990s heyday of house and techno music in Europe, two of the island’s most prolific movers and shakers took the time to share their memories and their vision for the future with us. So please, sit back, buckle up and enjoy a rip-roaring ride through 30 years of Ibiza music history as told by industry trailblazers Roberto Postiglione and Ernesto Senatore.

Growing up together in Naples, Italy, Roberto and Ernesto had been “friends for a long time” before they became business partners. Obsessed with techno music, the two pals were part of a dedicated tribe that travelled across Europe to follow the music they love. Roberto recalls, “In the late 1980s there was a big hype around German and American techno in Italy and people would travel from all over the country to the few places where you could listen to it. We would follow the music to cities like London, Amsterdam or Frankfurt… and then, we started talking about going to Ibiza.”

The duo arrived in Ibiza exactly 30 years ago, in 1989, and immersed themselves in the party scene. “Our group had a party route that would start in Pacha, move on to Privilege [then still called Ku], head to Amnesia for the sunrise and then everyone would end up in Space. We did this every day. We had a German friend who we called ‘the teacher’ because if we didn’t show up, she would scold us like we had skipped school!” laughs Roberto.

Starting out as PRs in Ibiza Town’s harbour, their first proper business idea single-handedly started a new after-party movement. With Space closing around 11.00 in the morning at the time, Roberto, Ernesto and Roberto’s brother rented a seaside bar nearby and tried to convince clubbers to come to their venue afterwards.

“In the beginning it was very difficult because people didn’t want to have an after party dancing in 40 degrees heat and bright daylight,” remembers Roberto. “But eventually we sold out not only our beach club but the two neighbouring venues too! Even the owner of Space was joining us. We were called ‘the inventors of the after-after-hour’.”

Off the back of this early success, Roberto and Ernesto first connection to the club scene was a bar they rented in Amnesia. But it wasn’t too long before they found another seaside location on the rocks of Es Codolar. Roberto explains, “It was called Zenith and because it was in a protected natural area we weren’t allowed to build there. We were gifted an old orange and yellow military parachute from a friend that became an iconic part of the venue. Every week we had a 1,000-strong crowd there with people dancing in the water.”

With their reputation growing, one of the big players on the club scene came knocking. Roberto says, “In 1996 Pacha called us and we took the Zenith concept there. We started in the back room and called it Zenith Area. It was very dark, with live percussions and a tribal vibe. Even David Guetta, who wasn’t a superstar DJ back then, came by and asked if he could play with us. And Deep Dish played their first ever set in Spain there.”

From there, it was no stopping them. “In 2008, we started a new project with Luciano. We loved his music and wanted to help him start his own movement,” remembers Roberto. “Our concept was full of life, full of energy, and a world away from the minimal trend that was dominating the scene. Luciano’s sound was blowing people’s minds.”

With another success under their belt, Roberto and Ernesto created their It’s All About The Music brand and began to work with Marco Carola on Music On; one of the biggest projects in their Ibiza history. Always on the lookout for a new challenge, now the dynamic duo is part of Vagabundos 2.0. The concept has undergone an aesthetic metamorphosis down to the last detail and now writes itself VGBDOS – but the message at its heart remains timeless.

With a more futuristic vibe, the new look is a reflection of a fresh start not only for the party, but also its frontman Luciano. During this year’s International Music Summit, the Chilenean-Swiss producer spoke openly about his journey to sobriety, a challenging but rewarding path that led him back to the top of his game. Roberto agrees, “Luciano is back on track both personally and musically. He is full of great ideas and he is leading the party from a new perspective. We have a great team and everyone is working with a lot of passion.”

With so many success stories to their name – and undoubtedly more to follow – we have to ask what is the secret to their success? Ernesto says, “We do something that we really love and we refresh our mentality every year. It’s very important to stay involved with the latest developments, because there is a lot of competition for this kind of work. But competition is good.” Roberto adds, “Let’s just say Ernesto and I always had a desire to do something that hasn’t been done before.”

The Beat Goes On

If you can’t get enough of the sound championed by Roberto and Ernesto, tune into Ibiza Global Radio from Monday to Friday between 20.00 and 22.00 when the It’s All About The Music show takes over the airwaves. Roberto and Ernesto’s radio presence goes back to the Zenith Area days at Pacha, when they broadcast on Ibiza’s first radio station. Now, About Music Radio opens the studio doors to established international artists as well as new talent. Their forward-thinking musical vision has seen Roberto and Ernesto’s project win the award for Best Radio Program at the 2018 VMAs, and, as always with the two entrepreneurs, there’s more to come. Ernesto tell us exclusively that soon, It’s All About The Music will launch its own 24-hour online radio station. There really is no stopping this duo!