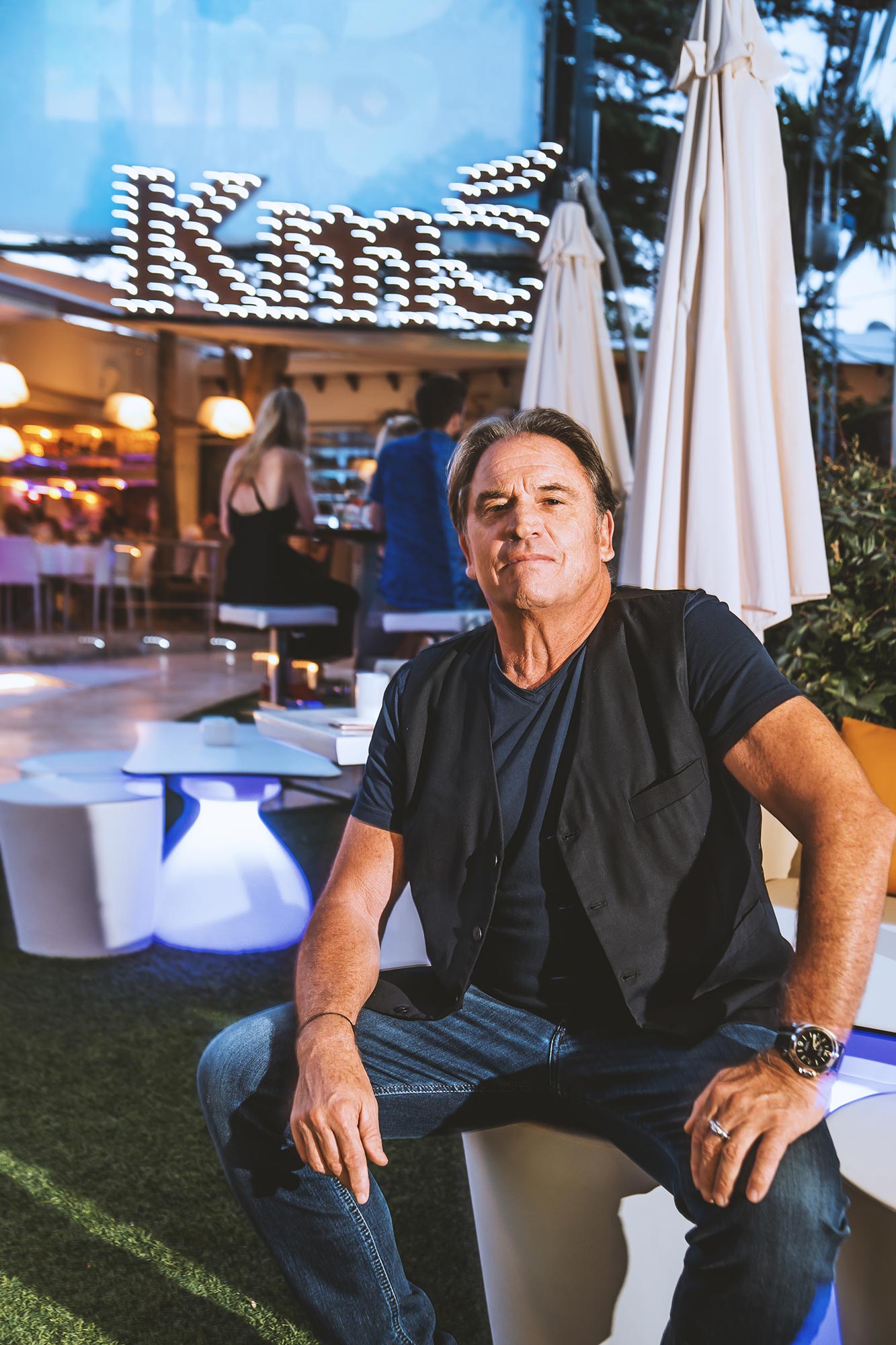 The first time he came to the island was in 1975. A friend’s parents had a house in Ibiza and one on Formentera, so he quickly got to know and love both islands.  His own parents owned houses on the coast of mainland Spain.

After finishing school, he broke off his business studies and subsequently teaching, before commuting back and forth between Cologne, Amsterdam and Ibiza in the ’80s. “Whenever I just have parties at home, the money runs out”, he told himself. “So, I’d rather open a shop and make a business of it.” “But it wasn’t as easy as that. He did not know Spanish law, and he was ripped off by the previous owners of the venue, which then became Km5. At first, he had a bad image because of the mini-pouffes that were there before. In the early days of Km5, everyone pitched in.  The furniture itself was cobbled together (in a not entirely legal manner) from GESA’s large cable drums, which were turned into tables for the outdoor area, and were simply painted white or black. An eventful time ensued with many ups and downs and participants who came and went. At one point in this period, he was about to sell Km5 because he wanted to buy what is now Blue Marlin.

Since 1988, he has been living on the island and has experienced many changes.  “Although it has all become more modern, it is still beautiful here, and there are still unspoiled spots and beaches on the island.  “However, all the fancy schmancy luxury nowadays disturbs me. On the beach, you can’t get paella anymore; there’s only foie gras, lobster and caviar. But these are passing developments, which somehow return to normal again by themselves”, he hopes. “It’s like with the mafias that come and also go again here on the island. These are all waves. It’s like on the beach; the waves wash everything clean again.”

It is not easy to survive in Ibiza, he says. “You have to know your limits and be constant.  In the end, the day here also has only 24 hours, just like in London, Paris or New York. But if you are at a party here and it really gets going – then you forget about the time.  All of a sudden, it’s 6 a.m. You have to go to work and take the kids to school.  You have to get everything together. For many people, that’s really difficult. I have already seen people with a lot of money  – with tons of money – lose the plot here.”

In the past, only the five big discos had music. In all other venues, bars and small clubs it wasn’t allowed. In them, the only thing that was allowed was so-called “ambient music.” There weren’t DJs back then either.  Parties on the beach, in villas or small clubs were immediately strangled by the big clubs.  All that has changed a great deal, and he played no small part in it. Together with others, for a long time he battled against the monopoly of the “Salas de Fiestas” association which allegedly had legal backing, so that there could be other music venues and DJs. “People wanted to go out and party with good music without having to go to a discotheque.”

He admits that Km5 has also become a bit more modern in recent years.  “But we are still a touchstone for Ibiza the way it used to be!” He is proud of his employees, most of whom have been working in Km5 for many years, and all of whom identify 100% with the “shop”. They are always friendly, and they even chat with the guests.  “We are the most cosmopolitan place in the world: here, people from all nations and from all social strata meet.”

He is also proud of his good relationship with the neighbours, none of whom has ever reported him. That is totally unheard of in Ibiza; there is scarcely another party venue that can boast that.

He is grateful to his employees and to everybody who has supported him. This includes, in particular, friends from nursery school or school days with whom he is still associated today, and who regularly come to the opening or closing parties at Km5. Some of them have become great entrepreneurs in the USA, while another one became a surgeon who recently operated on his meniscus. They have always been by his side through all the ups and downs.

At the end of our conversation, one thing is particularly important to him, and that is clearing up a rumour: “Km5 is neither sold nor is it for sale! Quite the opposite, we have just invested a lot of money to make it even more beautiful. And, like before, Josch is still the frontman, there at Km5 six days a week. These rumours are only spread by people who want to harm Km5”, he says before dashing off to the bar to give a warm welcome to some regular guests.