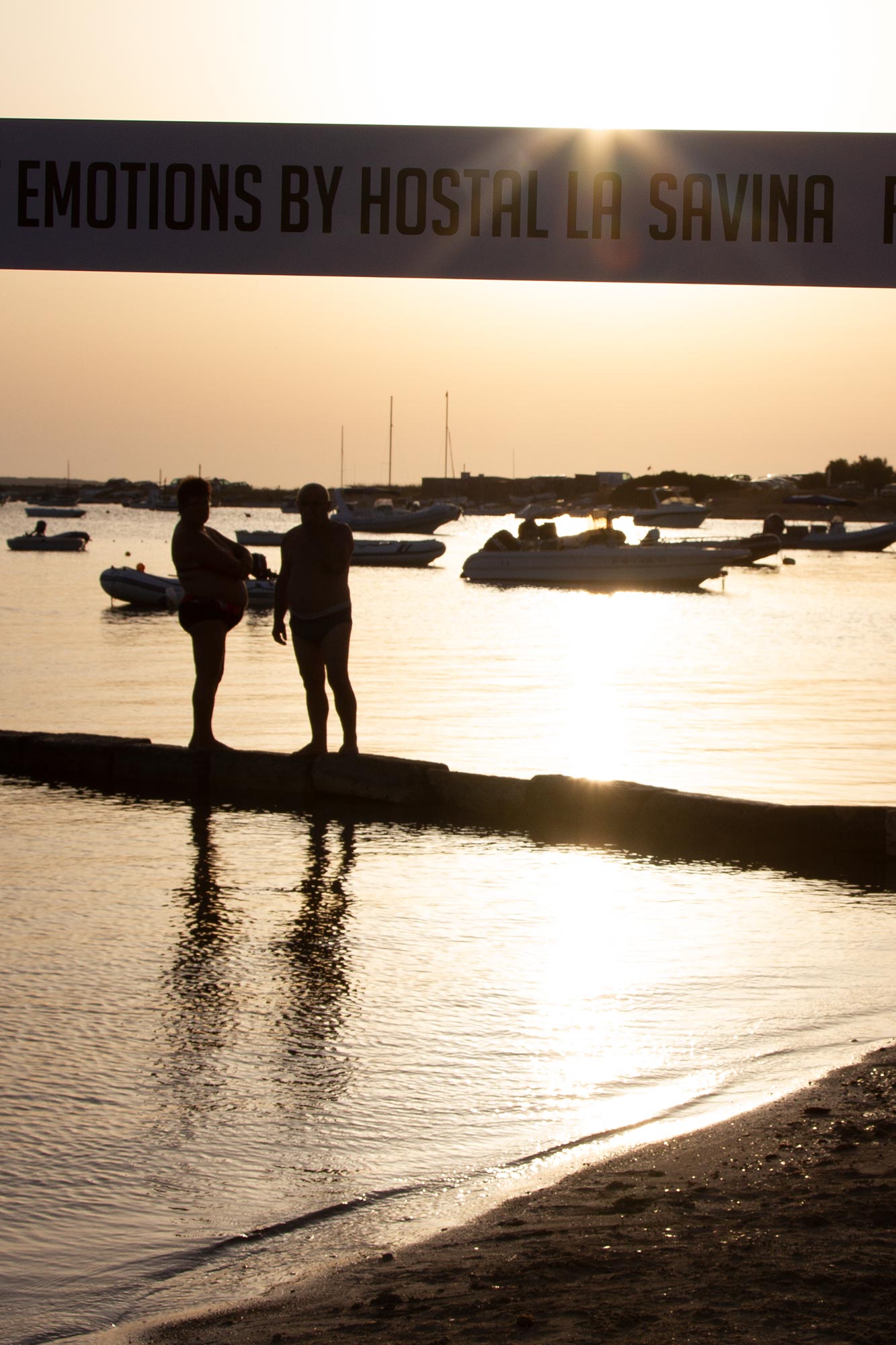 Life’s too short to miss a Formentera sunset

On July 4th, six members of the Ibiza Style team set sail for Formentera. Acting on a tip from Ibiza Global Radio, we had decided to check out the hotel and its latest venture, Sunset Emotions. Situated just ten minutes’ walk from the ferry docks, La Savina is owned by brothers Jordi and Pau Marí, whose pioneering great-grandmother first started renting out rooms here in the 1940s. Now stylishly rebuilt, it features 39 rooms, a cool salon with comfy chairs, a very chic dining terrace and it’s very own beach overlooking the lagoon known as Estany des Peix. When you see the classy ambience they’ve created, sample the exceptional cuisine on offer, or lie back on a beach bed admiring the sunset to the very best Balearic sounds, it’s clear that Jordi and Pau have managed to turn a simple hostel into one of the island’s coolest places to stay, dine and, now, party.

Before the party got going, I took the chance to chat with head chef, Sandro Gonzales. A native of Barcelona, Sandro is an ebullient, largely self taught chef who cut his teeth at the renowned Dom restaurant in Castelldefels. In Sandro’s own words his aim is “to combine flavours and textures to create non-lineal cuisine, one that produces a ‘wow’ effect” among the diners. One glance at the menu—where the emphasis is on signature cuisine including a mouth-watering range of meat, fish, vegetarian and vegan dishes (the latter his speciality)—confirms his unique approach. Just check out the “micro huerta” (mini kitchen garden) bio-organic dish he makes and you’ll see what I mean. No wonder it says “Cuisine is a language” on the cover of the menu.

By 8pm the Sunset Emotions beach party was kicking off with English DJ Tom Crane playing a vocal minimal set from the booth perched inches from the shoreline. The beach, with its own bar dispensing premium drinks, began to fill up with international revellers. At Ibiza Style’s table we were treated to mojitos, Cîroc vodka and such delicious appetizers as fried chicken nuggets in ginger and Mediterranean style lobster ceviche. Basking in the last of the sun’s rays, with the palm trees gently swaying, a light breeze caressing the surface of the water and pretty girls dancing on the sand, you could easily think you were at any one of Ibiza’s trendiest beach clubs.

Somewhat less steadily now, I returned to the softly lit terrace, keen to find out more about the range of drinks the hotel offers. Pau showed me the extensive menu of international wines, Champan Decibel— the extraordinary French champagne that spends its last year maturing in Ibiza against the musical background of electronic music mixed by local DJs— and their signature limoncello aperitif that’s made to a family recipe and which they have aptly renamed “Formencello”. With the starlit night sky visible through the open canopy above and the dining tables set amid palms, cacti, bougainvillea and a very unusual tropical Ombu tree, it’s surely one of the most romantic spots for dining on Formentera.

Sensing that the music had changed, I wandered back to the beach where the feelgood factor was running high. Top DJane and director of Ibiza Global Radio, Ana Tur, was setting the sonic scene with her unique brand of deep Balearic beats as she grooved away, hands held high, with the other bacchants. In her own words: “It’s a moment for the soul, to feel freedom on the sands and soak up a fantastic atmosphere”. And if there is a better definition of what these islands’ sunset spirit is about, I’d like to hear it. As the sun sank beneath the horizon, the partygoers danced and gazed towards the hotel’s unmatchable westward vista over the lagoon, living that precious Balearic moment to the full.

By 11 o’clock the party was over and, having said our farewells to Jordi, Pau and the staff who had made our day trip to the lesser of the Pitiusas Islands such a roaring success, we trudged back to catch the last boat home. Stepping off the gangway in the port of Ibiza, I stood for a moment admiring the sight of Dalt Vila bathed in moonlight. As I did so, I couldn’t help but wonder whether we hadn’t just witnessed the birth of Formentera’s beach club culture, it’s very own Declaration of Independence.