It’s 2am on the Las Vegas strip and once again three ladies who are all too familiar with this place are taking to the stage to a packed Sin City house.

Writer: Dan Prince | Photographer: Edison Graff / Bryden
Next Step
The first time they were in town they had Nile Rodgers and Bernard Edwards alongside them, this time it’s two EDM producers supplying the bass. “Las Vegas has grown so much from what was a sleazy adult getaway in the 70s to what it is today, a huge elite playground” giggle the girls from Next Step, the three former lead singers of disco super group Chic after performing with Aristofreeks at the Light club at Mandalay Bay.

Alfa Anderson, Luci Martin and Norma Jean Wright are no strangers to this sort of adulation. For two glorious decades there was no one bigger in the disco world than Chic with the multi platinum selling group sending shivers down your sequins thanks to hits such as ‘Le Freak’, ‘Everybody Dance’ and ‘Good Times’.

Next Step are in town with Ibiza based DJ/Producer duo Max Martire and Shanti Matkin celebrating the launch of their new six track EP that features two Chic classics and also four original songs.

“We are a little late to this new electronic party” admits Alfa Anderson. “It’s incredible though that there are now a new generation of club goers dancing to the classics as well as clamoring for new dance music. I’m not quite sure which direction we will go in with the new material, EDM leaves so much room for creativity and free expression, I am grateful to be here to see this resurgence and look forward to continuing the legacy.”

It’s not just Vegas that the trio have been rocking recently, last summer saw the girls join Nile on stage at the opening of the Hard Rock Hotel in Ibiza. “That performance was off the chain” says Alfa, “nothing but love, good vibes and good times – we are so looking forward to performing there with Next Step.” Was that night planned I wonder? “Not at all. We were in Ibiza recording our new music with Aristofreeks, Kathy Sledge was with us too and out of the blue Nile asked us out of the audience to perform ‘Good Times’, it was so much fun, Ibiza sure knows how to party.”

So what of Niles’s new found fame I ask them, he really is the man of the moment… “Yes Nile is on a roll” laughs Norma, “’Get Lucky’ was killer, I love Chic’s new single ‘I’ll Be There’ and I can’t wait to hear the new album and his collaborations with Chaka Khan and Elton John.”

So how does the white isle compare to the legendary Studio 54 in New York back in the day, probably the wildest club ever? “54 was great for its freedom and letting people cut loose and get wild” reminisces Luci. “Like a sideshow or circus, the music itself while excellent most times, was secondary. It was chaos without limits, at my age it was shocking stumbling over people having sex and using drugs everywhere but the best thing about 54 for a celebrity was that it was a place where they could go and not get bothered much, pretty much how it is in Ibiza today.” 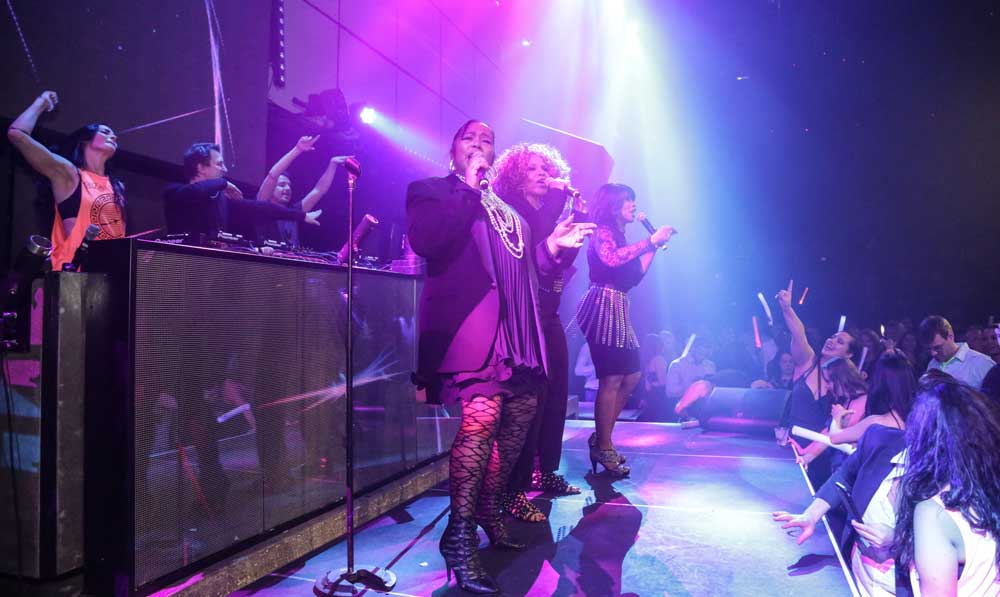 Next Step walk us through their history…

Luther Vandross : “There is an art to singing that I was privileged to learn from the master teacher himself. Professionally, he helped me home my craft. Personally, he imparted a lot of life lessons.” Alfa

The night Disco died at ‘Disco Demolition’ : “For people to physically burn albums and display that type of disdain and hatred was totally unheard of. It was the beginning of the end for Chic, but not for dance music which went underground and has had many reincarnations over the years. Just goes to show that you can’t keep a good dance groove down.” Norma and Alfa

Superstar studio highlights :“I loved working with Stevie Wonder, Luther Vandross, Aretha Franklin, Chaka Kahn and had so much fun working on Madonna’s first album. And I have to admit, I was totally star struck working with Michael Jackson. What a voice.” Norma

On their first trip to Las Vegas :”It was a lonely strip with only a couple of hotels. We hung out at Caesars Palace and I had never seen anything like it before. We were kids and just partied, partied partied. I ending up crashing out by a swimming pool.” Luci

Diana Ross : ”I was in such awe when I met Diana. I just stood there babbling away inarticulately.” Alfa

Nile Rodgers : ”Nile is and will always be a good personal friend and brother to me. He is like family and just like family, we may have ups and downs but we will always have each other’s heart in hand.” Luci