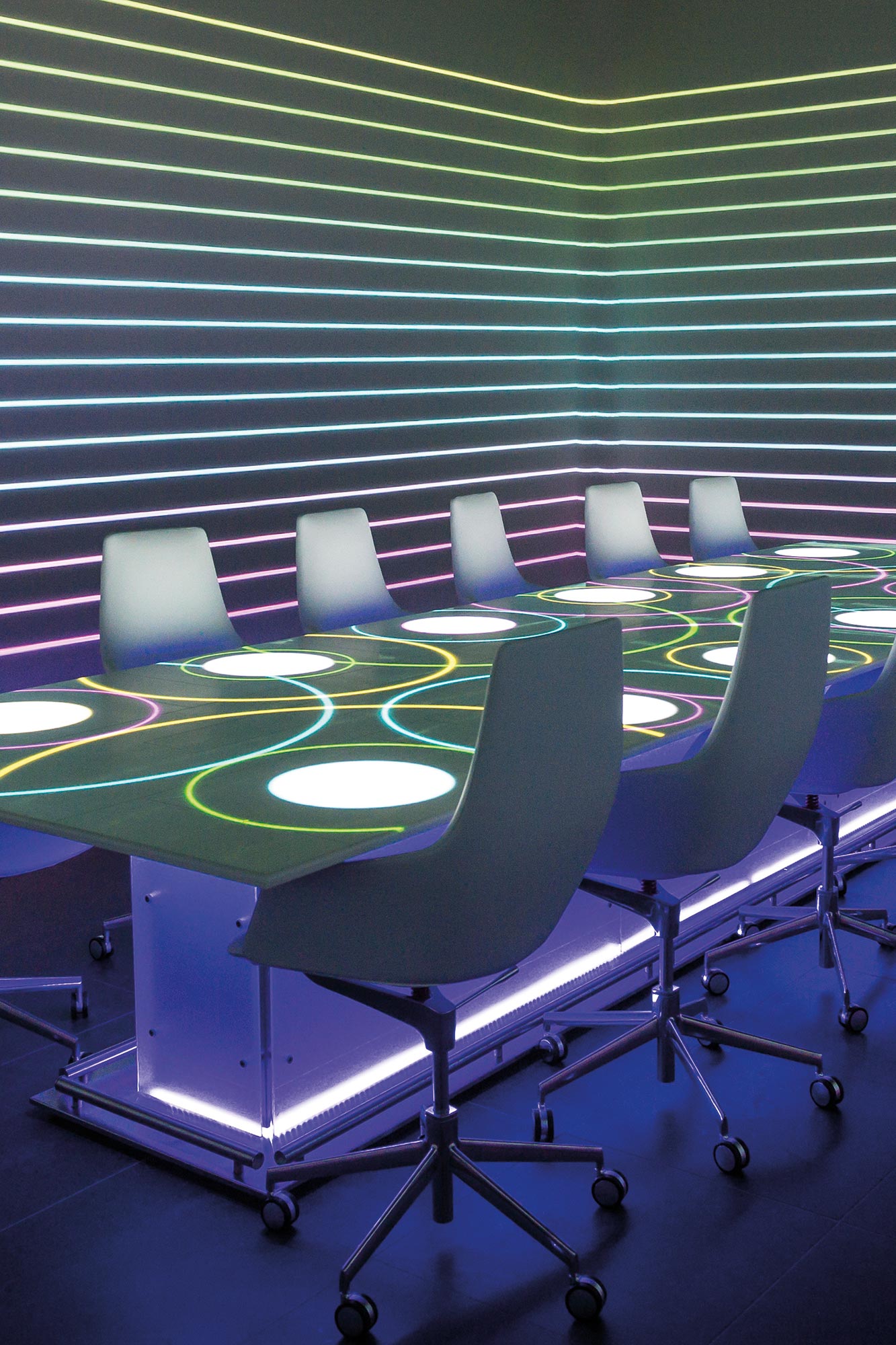 Sublimotion – An experience for all the senses

The exclusive pleasure costs €1500 (plus VAT). That’s where the well-disposed reader asks him or herself: is it worth it? Grouchy critics would probably now answer: it’s unheard of! You step through an inconspicuous, tin back door into a narrow storeroom where you have to wait because the “restaurant” is still busy with preparations for the evening. You help yourself to a cream cheese off a mirror that you can wash down with sangria from a jug. Afterwards you enter a goods lift that rumbles down to the cellar amid the terrific din. Once you have arrived, you take your place at an unlaid table in an over-sized room and you even still have to mix your own welcome cocktail… And that’s the point when any reservations you might feel are nonetheless dissipated. Because what was offered to us – me and 11 other co-diners – was a sensational, multi-sensory experience. They turned the lighting down in the room; deep blue light gave the place a mystical, cool atmosphere. The names of those taking part are projected onto the table so that each one finds their place straight away. You sit in comfortable wheelchairs. Located on the ceiling, out of sight, various projectors and sound systems project 360° landscapes or rooms onto the wall as well as the right background sound to each one. We set out on a gastronomic journey in 12 acts. The afore-mentioned cocktails to be mixed ourselves were served to us in an old library. A weighty tome was placed in front of each one on the table. On the instructions of a master of ceremonies, the book was then opened. Inside it were three test tubes the contents of which – clear essence of tomato, celery and vodka – each then had to be put into a glass measuring jug and mixed in order, according to taste, to make a Bloody Mary. Above all, you had to make sure you didn’t disturb the measuring jug as you did it. Only by concentrating your thoughts did the latter suddenly, as if by magic, begin – similar to a test tube shaker in the chemistry lab – to mix the cocktail. Astounded the person sitting next to me at the table asked whether it was “nuclear cuisine”…

I would rather not take away your curiosity or spoil your excitement about an evening in Sublimotion and that’s why I am not going to describe each one of the 11 courses that followed it. Only this much can be given away: you go on a long voyage that starts off in Andalusia, leads from the Antarctic to New York, via naughty Paris to South Sea beaches and all the way to the inferno. There was lots of fantasy and a meticulous love of detail in each one of the surprising courses. Moving images projected onto the wall and under the surface of the table matched the accompanying sound, table decoration and presentation of the dishes perfectly while an ever-present team served attentively. For certain courses the kitchen team was involved in what was going on, preparing the dishes at the table and also having to help out with serving. You sensed that the entire 26 person team is enthusiastic about it and fully behind the concept.

12 people who didn’t know each other before sat down at this table one evening by chance, grew enthusiastic about and enjoyed the amazing experiences of visual and gastronomic art, suddenly becoming a community as if they had already known each other for ages. Which is why – to the question that was put at the beginning of this report – I can answer “It’s worth it!” with complete conviction.

This evening had made me curious. I wanted to know what went on backstage at Sublimotion. I was able to have a peek behind the scenery the next day when I met up with Paco Roncero. To be honest, I had expected a kitchen along the lines of a chemistry laboratory and I was, therefore, all the more surprised to find a run-of-the-mill professional kitchen that, on top of everything, I’d imagined to be much bigger. Six chefs were busy with the preparations for the evening in a quiet, concentrated way. You would never guess that some of the molecular preparations for the dishes take place here. All I noticed were a nitrogen gas cylinder and a couple of special devices. The command centre for the visual and acoustic experience is situated right beside the kitchen. Nothing out of the ordinary here either – two young technicians sit in front of a pair of unspectacular laptops and PCs. They and the team in the kitchen are able to follow precisely what is happening at the table in the large room by means of screens. That’s where I met Paco Roncero, someone who – for a chef with stars – comes across as an exceptionally friendly, open and well grounded man. Along with a team of developers made up of six people, he has been working on the concept for this “gastronomic spectacle” ever since 2010. “We dish researchers only ever concentrate on what is on the plate, not on the surroundings. Nevertheless, now we have also created the surroundings to go with the dishes.” But just developing it alone must have cost an enormous sum of money? “It wasn’t so much that it cost that much money but rather the amount of time that we have devoted to it” Paco explains to me. Since 2012 there has been a small-scale Sublimotion in Madrid, a kind of experimental laboratory, you could say. Instead of 360°projections, here there are large, swivelling screens above the table that is only laid out for eight people. Since when has he been working with molecular cuisine? “It started in 1998. That’s when I began working together with Ferran Adrià in Madrid. Since then we are practically in wedlock, as far as molecular cuisine is concerned” he says, laughing.

Why a Sublimotion in Ibiza? “We wanted to take the concept from Madrid and bring it to the world, to project it internationally. To start with, we considered several places in Europe and elsewhere in the world. But then we came to the realisation that Ibiza brings all of them together in one spot. It’s very international, people here are very open to things and, what’s more, they’re ready to spend money. That’s why we decided on Ibiza.” Paco Roncero’s eight-man kitchen team is here in Ibiza all the way until October. Although his top priority lies, as before, in Madrid, he himself comes here for two to three days every week. Are there different menus in Sublimotion, in particular if a diner comes more frequently – or will they always be served the same then? “Well, we already have a couple of variations. Even if diners who are vegetarians come, people who have an allergy to certain products or who may not eat pork, we have got a couple of special dishes for them.”