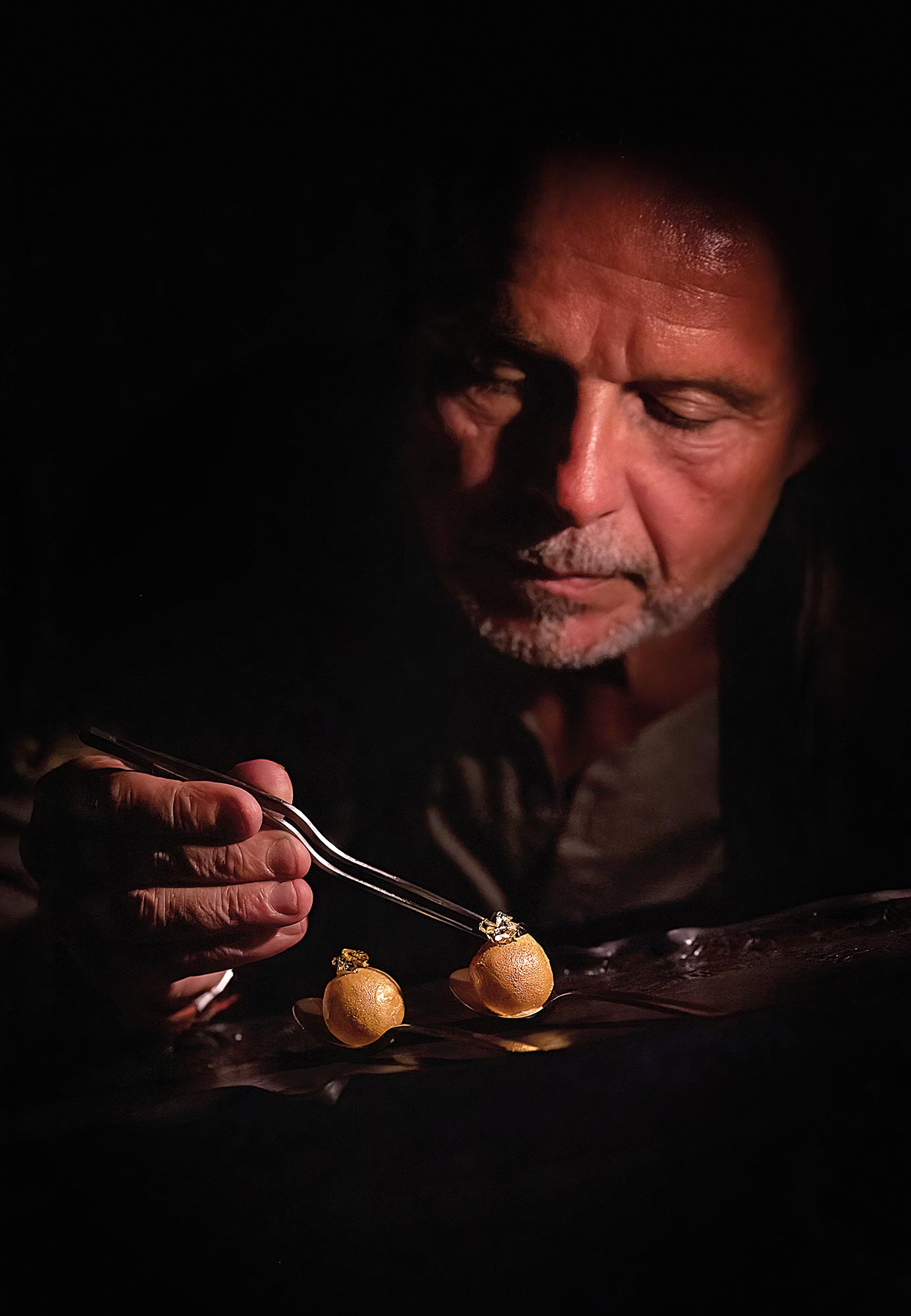 Like everyone here at Ibiza Style, I’m passionate about food, but rarely have I had a culinary experience comparable to that of 1742, the new restaurant from Nassau Group and two-Michelin-starred chef Edwin Vinke.

Located at the top of Dalt Vila, in a beautiful 18th century palace from which it takes its name, 1742 offers a journey for the senses that few on the island have yet experienced. Edwin Vinke reveals: “We opened a month and a half ago, and at first we wanted to keep it a bit of a secret.

Dining at 1742 is an adventure that begins when you board one of the shuttles that take you from the central Es Pratet car park through the steep streets of the old town. As we enter the restaurant, accompanied by the delicate music of a violinist, we receive the first bite of the evening: a pearl shot with gin, lemon, lemongrass and ginger.

We enter the palace via sumptuously decorated staircases and on each floor we find a host of surprising corners brimming with contemporary art: 3D fluorescent paintings, animal sculptures, works by Jordi Gómez or a striking three-dimensional map of the island on which the planes entering and leaving it are projected in real time.

We pass through the kitchen, where a smiling Vinke challenges us to guess what’s in a delicious trompe l’oeil that simulates a mini hot dog (we don’t get it), and the friendly staff show us the palace, with an impressive private room they call The Suite, with a private bar and bathroom with Jacuzzi, and the beautiful upper terrace, with the most incredible views of Ibiza and the Cathedral just a few metres away.

In the dining room, set with artistic projections on the walls that change throughout the evening, we enjoyed the 1742 tasting menu, seven steps that seem like many more, because they are all made up of several different dishes and bites. We started with appetisers of tapioca bread, mini pancakes with miso cream and potato dumplings with seaweed and wasabi, followed by an excellent selection of seafood with a spicy touch, all washed down with a great Albert Bichot Family Chablis. We continue with a sturgeon from which, in order to extract the precious roe, Vinke uses everything, preparing belly bacon, dashi broth from the head and bones, and smoking the back, as a fundamental pillar of his philosophy is “to respect what nature gives us”. This dish in particular is served with an exquisite Riesling, a success of which the chef comments: “I had to fight for it, but it is the best wine you can serve with caviar”. 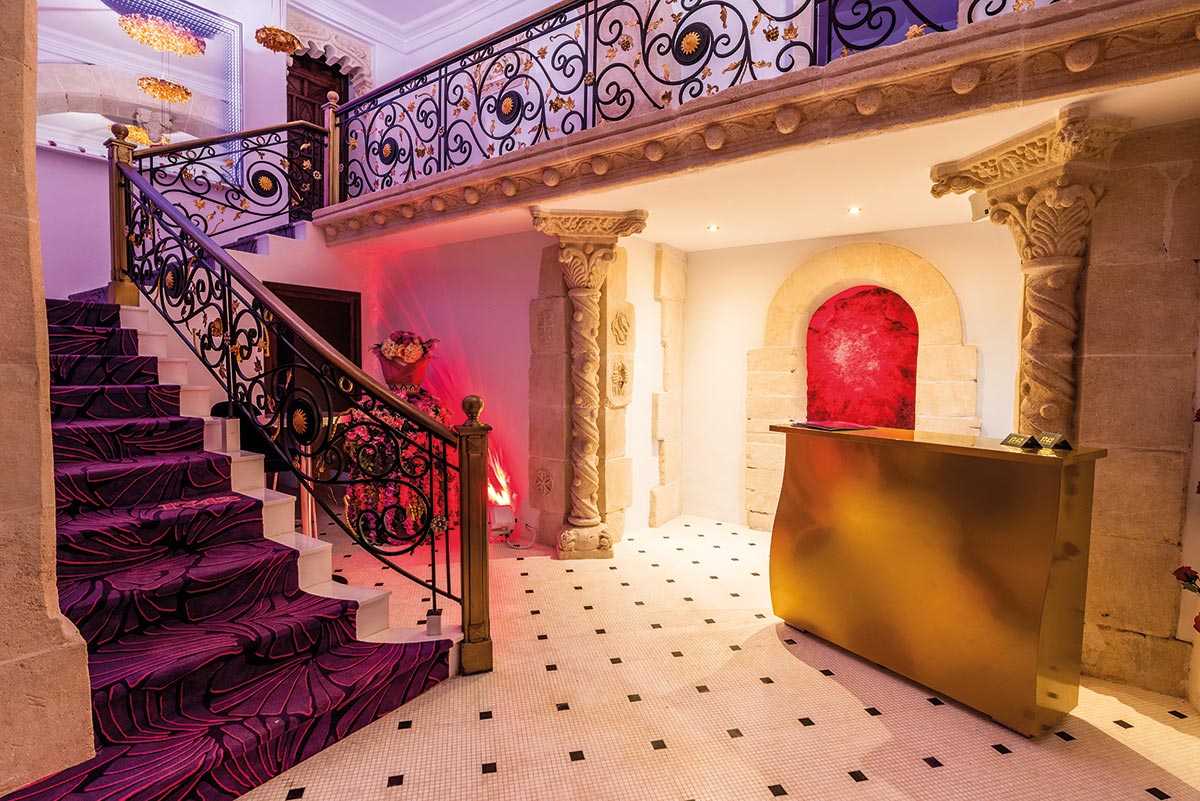 The main nod to Ibizan gastronomy comes with the two tasty preparations of ‘rotja’, a rock fish that is very common in Ibiza. Next, three delicious preparations of blue lobster in which we are surprised by a foam accompanied by a tomato reduced to minuscule dimensions after being baked for 30 hours, pure flavour. At that moment, a young soprano appears and begins to sing the ‘Habanera’ from Bizet’s Carmen among the tables. One of the many moments that make up the magical atmosphere of 1742.

To close, two courses of summer venison, a wild meat that always takes precedence over farm-raised meat in Vinke’s cuisine, very tender and served with a powerful red wine Valduero Unacepa. Each of the dishes and wines is explained in detail by the charming staff, who serve with an admirable pace, without a single idle moment all evening.

The dessert, which we had on the upper terrace chatting amicably with Edwin and his right hand Carla from Nassau, is also sublime: an assortment of wonderful morsels such as vanilla ice cream with lavender and rhubarb, dark chocolate with caramel and mascarpone, praline bonbons… After dinner, he explains that his culinary proposal here is basically the same as in Holland, although adapted to local and seasonal produce, using ‘rotja’, barnacles or Ibicencan lobster, and also vegetables sourced from local farmers. When we show our admiration for his talent in cooking fish, seafood and vegetables, he laughingly confesses the secret: he eats some fish, but is essentially a vegetarian.

For the first time in 30 years, Vinke has left his famous restaurant De Chrome Watergang to come and work in Ibiza. His place, awarded Best Fish Restaurant six years (five of them in a row), has been left in the best hands: those of his wife Blanche and his son Tom, who, despite the pressure and his 26 years, as his father proudly comments, is “doing a great job”, not in vain he has been at his side in the kitchen for 5 years. Edwin has spent many years holidaying in Ibiza with his family and frequenting Nassau as a client, and in the summer of 2019 he took part in a charity event in Tanit organised by War Child, a charity with which he regularly collaborates.

Excited to be able to travel and live new experiences with De Kromme Watergang in the hands of his son, Vinke tells us that he plans to open another restaurant in South Africa this autumn. He will continue to come to Ibiza for at least the next 5 summers to further develop this innovative and creative project. The idea is to imbue it even more with the essence and art of the island, and to move this more exclusive and private dining experience to the terrace, while offering more casual cuisine downstairs. In love with the island, he says: “I’ve travelled all over the world, but I always end up coming back to Ibiza, I don’t know why, maybe because of the energy, it’s really where I want to end up”.