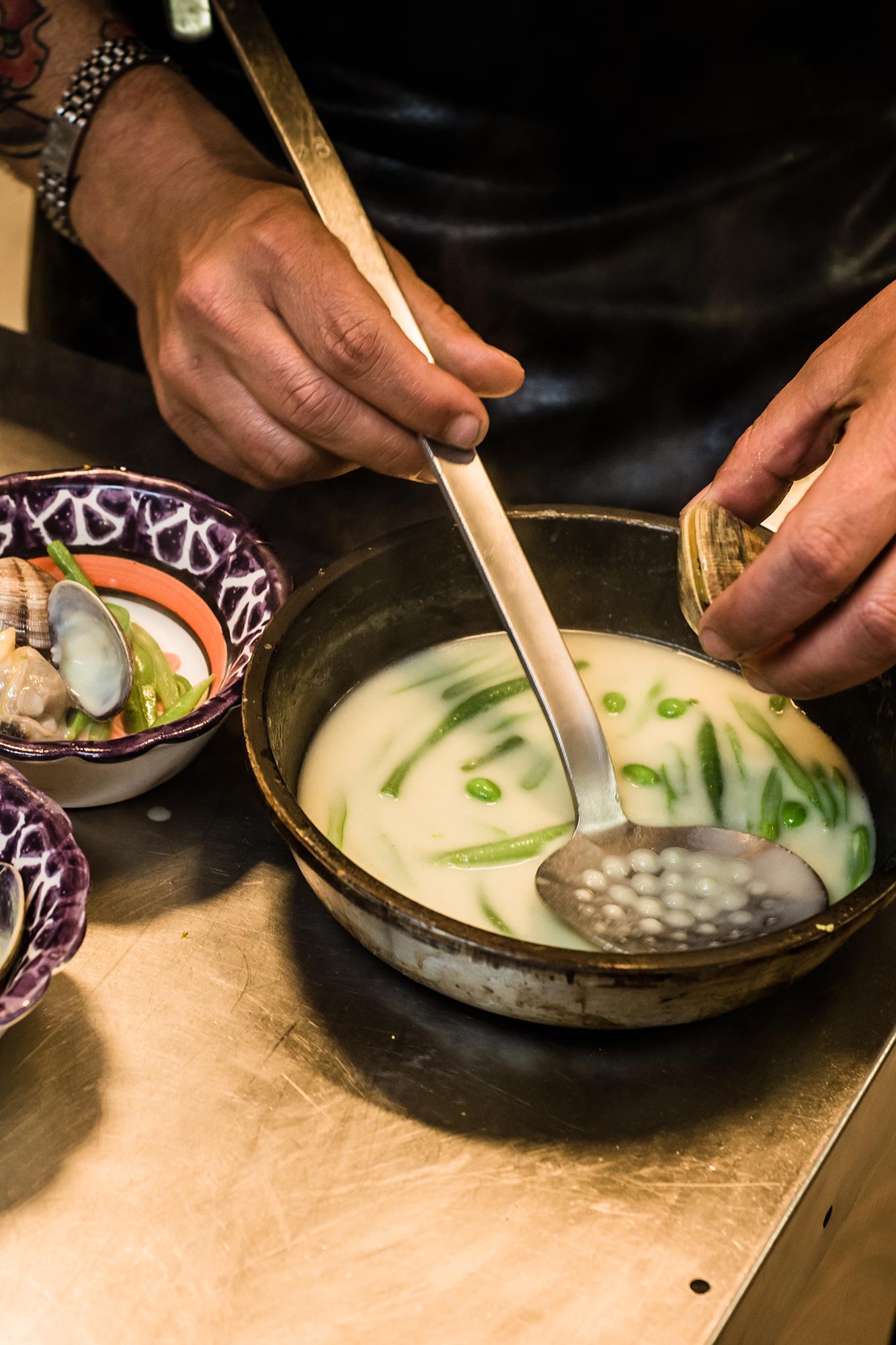 My name is Iain Thomson, managing editor at Essential Ibiza. I’m an Ibizaholic! From my first encounter in 1983, I have been addicted to the island, to help me get a handle on that addiction it was time to check into therapy; Ibiza Therapy. The pop-up gastronomic experience has been one of the hottest tickets throughout the winter, offering islanders a unique combination of Michelin star chefs in the kitchen and respected Ibiza based DJs behind the booth. As the island starts to ease into life and look to the new season, I headed to OD Ocean Drive hotel for the latest edition of Ibiza Therapy, where we would be treated to the talents of not one but three chefs – Dave de Belder, Luca Rossi and Andrea Magnelli.

It’s a great time to be on the island, there is a real sense of calm before the approaching storm, the roads are quiet, there is last minute building being completed and some fantastic intimate gatherings to be enjoyed. The first spattering of tourists has already landed and can be easily identified with their shorts and tee-shirts as the rest of us stay layered up. The marina is not quite at its vibrant peak but many of the venues are full as I drop in for my first taste of the dining experience that has captured the imagination of the island. Howard Hill is on deck duty and is in the early throws of his musical masterclass that will see him take us through several genres throughout the evening. It’s sets the tone perfectly as diners gather early to sample the delights of Law Gin.

Having already collected several awards and seen the brand launch in several other countries, the Ibiza based Law Gin is enjoying the fruits of its labour. With a station packed with all sorts of goodies, brand ambassador Raquel Herrera Garcia infused the popular gin with a selection of different additions to give each glass a unique flavour. Ibiza Therapy boasts a chilled atmosphere, offering the opportunity to make new friends as well as meet old ones, all under the premise of sharing some of the most amazing food, as Dave, Luca and Andrea worked their magic in the kitchen. The conversation flowed around the table as new friends got to know each other, that is, until Luca appeared with the first dish and talked us through its creation. This an entertaining part of the experience and gives some insight into the level of creativity and love that has gone into every part of the feat we were about to enjoy.

Our first taste of the magic that has been produced in the kitchen is a homemade goat ricotta, almonds, Kombucha vinegar and wild herbs and a Mediterranean cod croquette, with coconut, aji amarillo kimchie, two completely different dishes that complement each other. The creamy ricotta with the subtle bite of the Kombucha vinegar a is a delight but it is the burst of flavours from the cod croquette, including a little sweet and sour and a fiery kick from the homemade kimchie that really catches the attention. The portions are the perfect size to appreciate the culinary artistry but leave enough space for the following rounds. Next up is the crispy fish roe bao burger, avocado jam, ají limo mayo and criolla salsa. Cutlery is abandoned in favour of hands as we all munch through another plethora of textures and flavours. We debate which is the more impressive, the unbelievable taste of the food itself or the creativity to come up with these magnificent combinations before bringing them to fruition.

Clams are not a dish I would normally opt for, given the choice but the
venus clam with creamy coconut, kefir lime, green beans, chili and cilantro is another stand out. Having disposed of the clams themselves, we are left with what is a delicious soup, which is quickly dispatched. Another flavor explosion in the mouth from the distinctive clams to the bite of the chili. The general consensus up to this point is that we couldn’t identify a clear favourite, such was the level of each dish. This was about to change with the arrival of the crispy chicken wings gado-gado, spicy pineapple, miso mustard and wild sorrel. It was time to get our fingers messy as we delve into the bowl to fish out the wings. The meat fell off the bone, the miso mustard was the perfect accompaniment and the sweet and spicy mix of the pineapple was incredible. Such was the impact of this particular dish hat plans were hatched to nab another portion, unsuccessfully.

It was probably just as well we didn’t overdo the chicken wings as there was just enough room for the final dish of the evening, one that was made in Ibiza. Every ingredient was sourced locally and to say the cafe de Ibiza, es broll, carob and passion fruit was a fitting finale to one of the extraordinary meals I have ever had the pleasure of sitting down to would be the understatement of the day! All of the ingredients combined to create a spectacular climax for one of the most memorable dining experiences ever. The good news is that Ibiza Therapy will be continuing throughout the summer, meaning you have plenty of chances to book your table. Forget everything you ever knew about cooking or eating out and prepare to have your mind blown by this gastronomic masterclass.