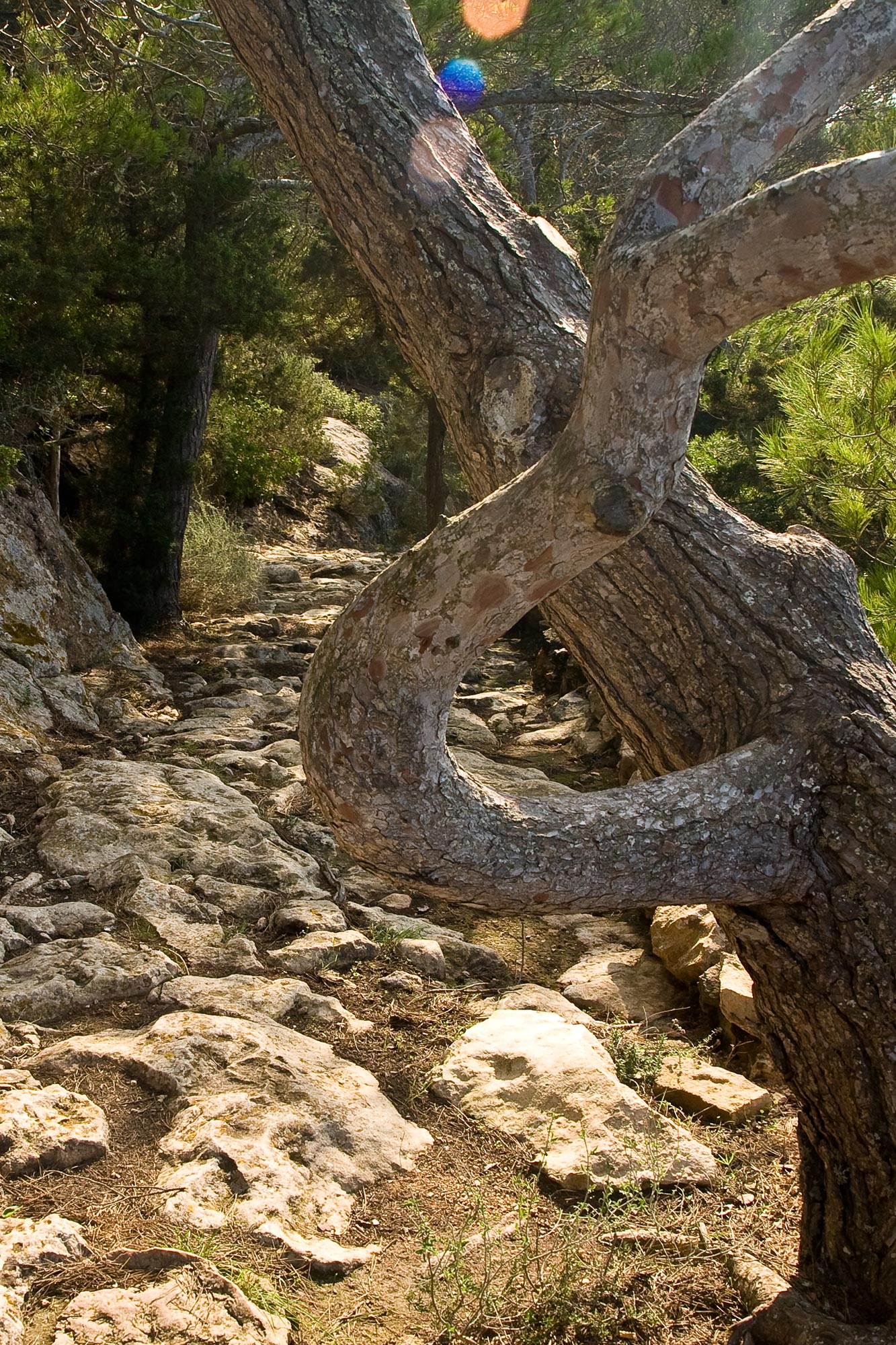 Formentera is best explored on foot or by bicycle. Visitors on motorcycles or in cars all too often miss the captivating nature reserves and the close contact with its magnificent natural surroundings.

Of all the various footpaths, the Camí de sa Pujada, in particular, offers the best way of getting to know the island. You should be certain to take with you an essential bottle of water, a notepad and pencil, and if possible a camera.

The path stretches out like a vein of stone covering a distance of 1,500 metres and joins up with the Camí Bell des Mola which starts in San Francesc Xavier and runs between Es Caló and El Pilar de La Mola.

The relatively easy footpath allows you to experience the rocky coast to the east of the La Mola promontory with its typical multi-hued Mediterranean vegetation of dense pine and sabina woodland, and bushes of rosemary, juniper and rock roses. At various places along the route, the walker can enjoy a view of both of Formentera’s coastlines and of Ibiza and Es Vedrá.

To satisfy our curiosity here at Ibiza Style Magazine, we asked Santiago Colomar Ferrer, a history graduate from the University of Barcelona specialising in modern history, who was born in Formentera in 1968, about the origins of the trail and its importance as a transport route for the island’s economy, as for centuries the Camí de sa Pujada was the only link between the flat part of the island and La Mola.

Right at the beginning, Santiago Colomar explains to us that the name Camí Romà (Roman road) which it has acquired in the last 30 years has absolutely no historical basis: “In his time, the historian Joan Marí Cardona had already confirmed this to be, to all intents and purposes, an exaggerated fabrication by a tourist guide in Ibiza. In reality there is no reliable research to back up this statement.”

Colomar believes that the origins of the path go back to the Middle Ages. At the time, it was the only route connecting the flat and the higher part of the island. And so it stayed until the PM-820 road was built in 1920, linking La Savina to the El Faro de La Molina lighthouse.

Colomar continues: “When we talk about the Middle Ages we need to go back to the 13th century, as at this time the path was already being used by Augustinian monks. They founded their monastery in 1257 on the high plain of La Mola. Today’s footpath was their access to the island’s own natural harbour at Es Caló de Sant Agustí. They also used it to drive their cattle to water at Pou des Verro, having been granted the right to do so by Guillén de Montgrí in 1258.”

It is assumed that the original path was much narrower than the one today, and that it was only towards the end of the 18th century that this well-travelled route was improved as part of widening and modernising works ordered by the rulers at the time, so that not only people, cattle and pack animals could travel along it, but also carts for transporting goods.

Evidence of the widening of the path can still be found in many places today in the vertical cuts in the cliffs.

Santiago Colomar adds that this work was carried out by prisoners from the ‘Ses Salines’ prison in Ibiza. “At the time it was normal for those in power to use convicts to carry out public works.”

During the same period, the path was also paved with stones, which according to Colomar is a further indication that the path does not go back to Roman times. “The common assumption that any path paved with old stones must be a Roman road is as incorrect as for every Spaniard from Seville to claim that his mother was a Flamenco dancer and his father a bullfighter. The ‘Roman road’ theory is nonsense, and there have been no reliable studies to date to back it up.”

According to archaeological research carried out by the former Consell Insular de Eivissa y Formentera, modernisation work on the path peaked around 1900 and was overseen by the highway engineer Pau Urduach.

Santiago Colomar goes on to explain that Urduach and his helpers carried out a series of other improvements on the island, on the orders of the authorities of the time. For example, they laid the first drainage from the Estany Pudent lagoon, planted many vines, carob and fig trees and improved Formentera’s transport links. “Though they were not able to achieve their goal of establishing large settlements around the island’s churches, as the inhabitants of both Formentera and Ibiza preferred in the past to settle over a wide area, far away from the control of any kind of authority.” Along the entire length of the Camí de sa Pujada, the keen observer can spot small crosses carved into the stone, which leads Santiago Colomar to believe that they stem from the religious use of the road, as it was used by the faithful on their way to church and for carrying the dead to the old cemetery at San Francesc Xavier.

Its route, close to the rocky coast line, shortened the distance between the monastery and the harbour of Es Caló.

Santiago Colomar also stresses that very little is known about the Augustinian monastery: “All we know is that it is said to have been founded in 1257, that the monks lived by raising cattle and that they were allowed to cultivate the land in accordance with rights transferred by the Church.”

The heirs of Berenguer Renard attempted to drive out the monks at the end of the 13th century, as they apparently paid nothing for using the fields freely granted to them by Guillén de Montgrí – one of the reasons why the church in Tarragona is also implicated in the closure of this religious community dedicated to the Virgin Mary.

In 1993, the Consell Insular de Eivissa y Formentera of the time declared the Camí de sa Pujada to be a ‘Property of Cultural Interest’ (BIC), and it lies in a nature reserve classified as an area of special interest – ANEI (Area Natural Especial Interés).