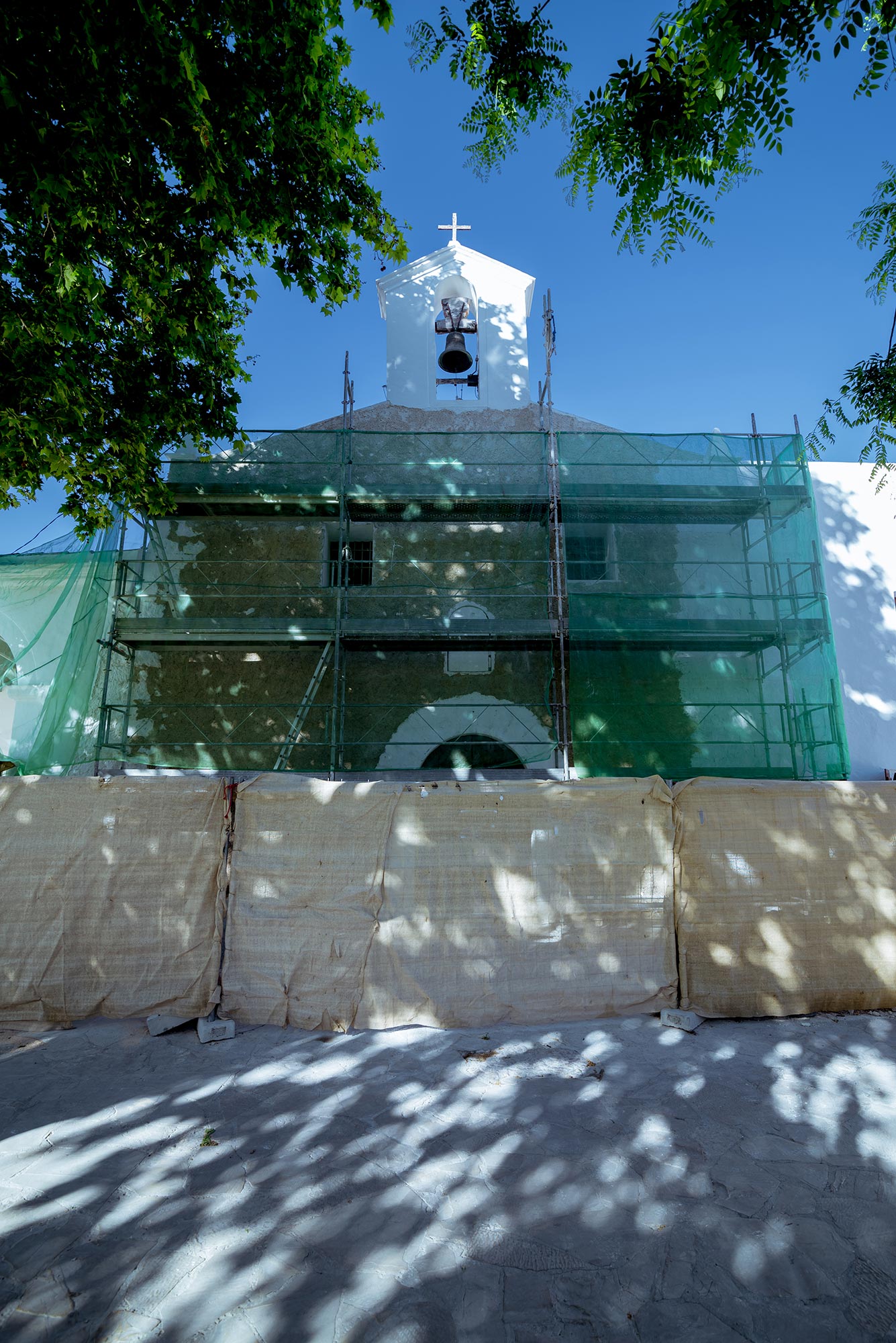 Not many people know that Ibiza houses one of the most beautiful, important works of mediaeval iconography to be preserved in Spain. After several years of works that were not free of a degree of controversy, the simple albeit beautiful Mare de Déu de Jesús church once again houses its famous larger altarpiece. This Gothic Flemish style jewel, with several Renaissance elements, has undergone a range of mishaps and diverse restorations of which the latest is the most important. Pedro Miguel López, the parish priest of the church in Jesús, remembers having witnessed four: “it is a miracle that it has managed to make it down to our days”. In fact, until now it has never been possible to appreciate this great pictorial work that speaks to us of wealth, temptation, life and death as now in its original colours.

Commissioned by the Dominicans to the family of Valencian painters, Don Rodrigo de Osona and his sons, Francisco and Jerónimo, in homage to the Virgin Mary, whose portrait occupies the central, most important picture, the altarpiece was painted between the end of the 15th century and the beginning of the 16th century. It was paid for by the University—the governing body in Ibiza during that period—with a cargo of what was then highly valuable salt. Nonetheless, it was to be sold many years later along with the church in Jesús to the Sisterhood of St Mary, the clergy in Ibiza, and the parish workers, who would come to be the village’s representatives within the church. This may go some of the way to explaining the immense affection that the inhabitants of Jesús have always felt for their altarpiece since, as the parish priest Pedro Miguel points out, “the altarpiece belongs to the Christian village of Jesús”. The village’s love of the altarpiece and awareness of its artistic value also meant that it was saved from being sold during the Civil War.

Its home was always in this church that started out as a Franciscan convent in the middle of nowhere, a zone of marshes: “two metres beneath the ground there is seawater”. Successively abandoned by the Franciscans and then by the Dominicans in the face of continuous attacks by the Moors, the convent was abandoned for a long time until it became a parish in around the year 1700. In the 1990s, the church underwent extensive reformation. However, in 2014, urgent works had to be carried out in order to protect the altarpiece from adverse conditions of damp and high-temperature. As it is, for example, one of the upper pictures has almost completely lost its paint owing to the fact that a poorly closed vault meant that it was rained upon. The reform that has been carried out is designed to avoid future problems of this kind by also repairing the church.

On the altarpiece, we can make out Dominican iconography with Franciscan elements that are, in any case, very different from the current ones. The predella, or lower edge, shows us the different stages in the life of the Virgin Mary: Annunciation, Nativity or the birth of Christ, the adoration of the Three Kings, Resurrection, Ascension, Pentecost and the transit of Mary. The body or main subject is that of the Virgin Mary (the Virgin of milk) breastfeeding her son and showing one breast. Faced with the embarrassment of certain churchgoers, the parish priest asks whether “there is anything more natural than a mother breastfeeding her son?” This central picture is one of the most interesting and most replete with symbolism. The hands of Mary, one of them young and healthy looking and the other cadaverous speak to us of life and death, and the bird to be found at her feet with a coral collar in its beak symbolises temptation: it is a representation of the devil. Above, we find a typically Franciscan picture: St Francis of Assisi’s dream of Jesus supported by four unusual, red-winged angels. In the others, we see St Anthony of Padua with a cup and one of the Gospels, St John the Baptist without the rod with which he is usually depicted, and the miracle of St Gregory, St Mark and St Peter. The entire piece is framed by the dust cover on which we can see, on a number of smaller panels, paintings of St Sebastian, St Onofre, St Luis of Tolosa, St Vicente Ferrer, St John the Evangelist, God our Father – the central, most deteriorated image, St Antonio Abbot, St Catherine of Alexandria, St Nicholas of Bari, St Bernard and St Roque.

Do not miss the opportunity to contemplate one of the three most important works of art in Ibiza, along with the Renaissance walls and the Cathedral’s monstrance. It is a genuine jewel of Spanish sacred art whose beauty we are able to enjoy today in greater splendour than ever.