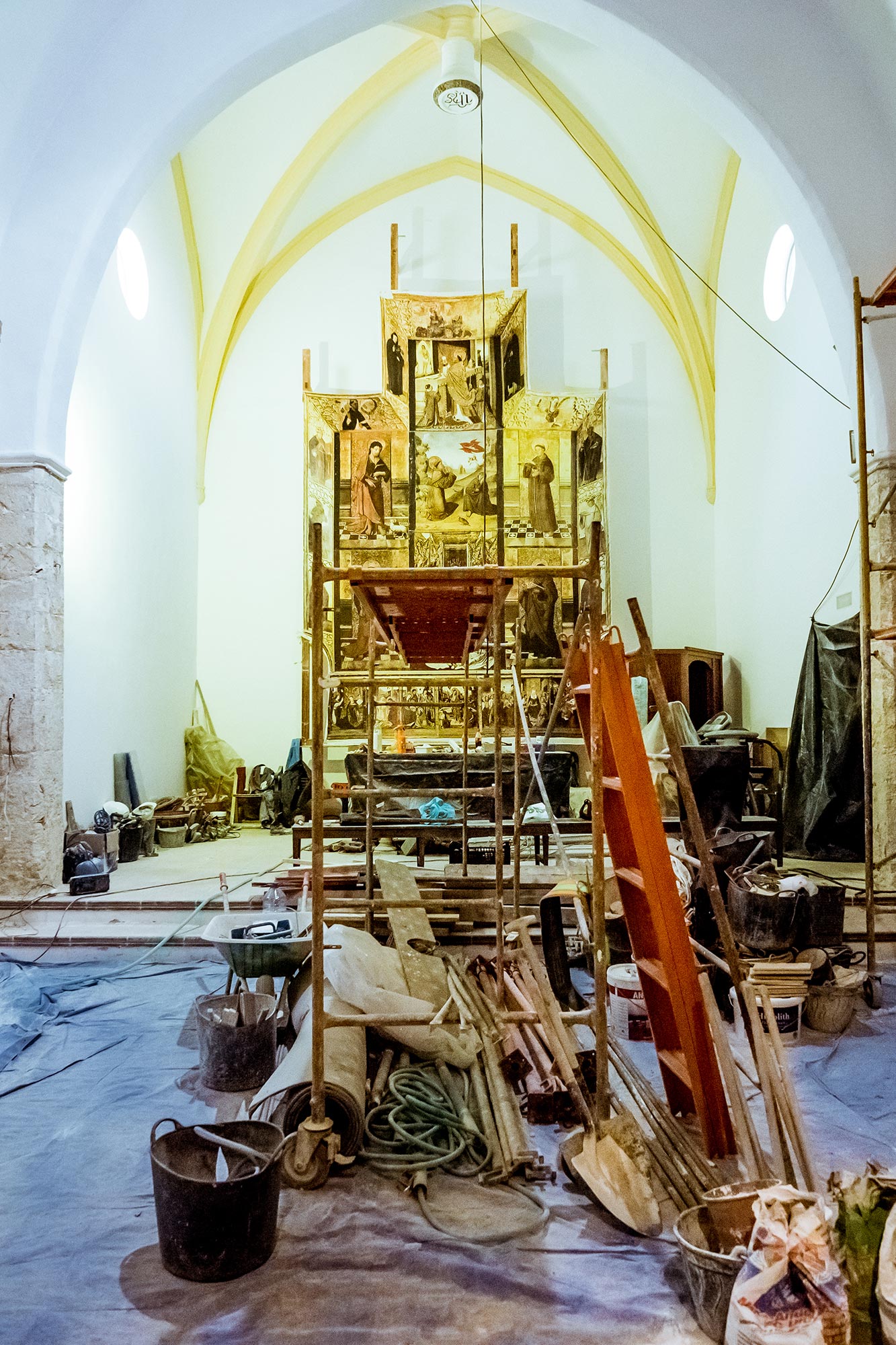 Miracle and surprise – The church in Jesús reveals its secrets

Perplexed, we discovered the materials of the original construction: earth and lime. It seems like a miracle that these walls could have managed to support the weight of the building for more than five centuries. It is one of the more surprising moments of the visit to the refurbishment works on the church in Jesús, where the archaeologists Andrea Torres and Ángeles Martin showed us the interesting discoveries that are the fruit of their labours.

The church is undergoing extensive renovation to protect the famous XV century Gothic altarpiece by Rodrigo de Osuna-one of the jewels of Ibiza’s heritage-it was housing from damp in the building. The altarpiece was restored a year ago, and it is now waiting for the works to be completed so that it can return home: “We know for sure that the altarpiece was made for the church in Jesús. What we do not know is the exact reason that it was commissioned, probably to attract Franciscan monks here”. The work of art cost a fortune at that time, paid for by the University with a cargo of salt.

From the rammed earth construction, which was such an inexpensive mixture of earth and lime, they have deduced that the original temple was very humble. What is more, it can also be assumed that the original vault was made of wood since it would have difficulty supporting the current sandstone ceiling. Another interesting detail in support of this theory is that in the upper part of the altarpiece two notches can be seen in the frame that could have been used to fit it in the beams.

Andrea explains to us that, first, a presbytery that was made using, in part, the old parish house (of which one arch and part of the roof still remains) and then a number of different chapels were added on to the original rectangular construction. One of them conserves those fashionable XIX century Valencian tiles that can still be seen in churches such as those of Sant Jordi or San Antonio. In capitals and pilasters there are polychromy remains that clash with that deeply rooted idea we have that Ibiza’s churches should be white. Moreover, on the outside, we can see ‘fishbone’ reinforcements: a XVI century technique that was also used in defence towers.

Andrea is overflowing with passion while revealing these finds, “For me, this work is of no use if it cannot be explained; that is why people sometimes see archaeology as something negative, a nuisance.” She also emphasizes that it is unusual in Ibiza to have the opportunity to study so thoroughly a building of these characteristics, about which, furthermore, almost nothing was known.

In October, they plan to publish the study in which they are now immersed. The intention is to turn the church into a museum space that will include, if the local authorities agree to it, an ultramodern 3D model of it: something totally groundbreaking in Spain. And it’s just as well because, as Andrea solemnly says: “You are not going to see it again like this; it is going to be covered up for at least 100 years.”