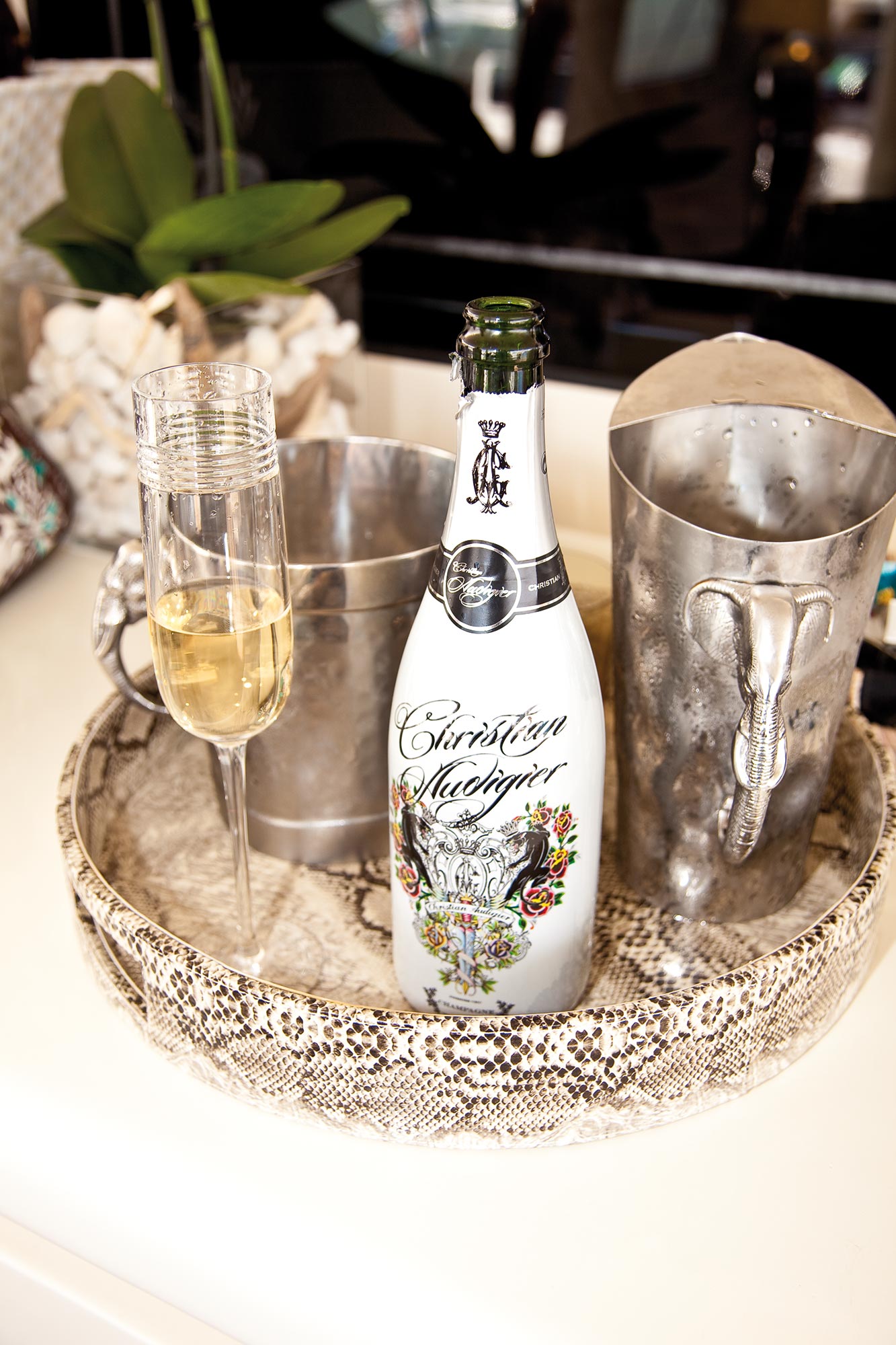 He’s experienced highs and lows. Coming from a modest background, he had to earn a living at an early age. Aged sixteen, he was discovered by a jeans company and designed for brands such as Diesel, Lee and Levi. Finally, he became Chief Designer and Vice President at Von Dutch. He fell out with the company’s owner and quit. He had a heart attack and had to start again from scratch. He set up the T-shirt fashion label, ‘Ed Hardy’, and was a big success. Stars and starlets adore his style. He quickly built up the company into a world-wide fashion empire offering a broad range of products.

We met up with him on his eighty foot yacht HERE COMES THE SUN (price, around 2.5 million euros) at Ibiza’s new luxury harbour marina. Actually, he had only intended coming across for a few days from Saint-Tropez but liked it so much, he stayed for several weeks. “I’ve been to Ibiza many times,” said Christian, “but this is the first time on my own yacht. I really like it here. People are warm and friendly. It’s very different to Saint-Tropez. It’s much more relaxed and normal.”

Son, Dylan, is also on board and papa gives him the job of showing an RTL camera team the yacht’s luxury cabins. As I’m chatting with Christian Audigier on the aft deck, my mobile rings. It’s Pete Tong, inviting me to a birthday party round at his place. Christian says with a chuckle, “Right then, I’ll be seeing you tonight. I’ve got an invite too. Pete is a good pal of mine and his wife Carolina used to be with me.” “Great!” says I, “we’ll take photos of Carolina with her two men.” In the meantime, the TV team have caught up with us and follow our conversation with interest.

Christian, you don’t just print tattoo artwork on your T-shirts, you have some tattoos yourself.
Yes, I have. Here on my left arm, I’ve got my son, Dylan. On my right arm, my other son, Rocco and V.I.F for “Very important French”. On my back, I’ve got my daughter Cristal Rock, alongside a king-size version of my logo: Christian Audigier, established 1958 Los Angeles.

And yesterday, you got another one here on Ibiza?
Yes indeed. I had this cross done just yesterday afternoon here on the island. It took four hours and was very painful.

What does the cross mean for you?
You’ve seen the tattoos with the names of my children, well, this cross is in memory of my mother.

You know the best tattooists in the States and have used some of their work for your textile prints.
I’m always on the lookout for new designs. I’ve found an excellent tattooist here on Ibiza. I’m meeting him tomorrow to select some artwork for our textile prints. The backbone of my collections will always be T-shirts printed with tattoo artwork.

So you are working even though you are on holiday?
I work a lot and enjoy it. I love work. Especially this kind.

Which are your favourite spots in the Pitiusan Islands?
I adore Formentera. Malibu is my favourite beach on Ibiza and I love the Atzaró.

You have an American cook on board but what do you think of the local cuisine?
Oh, it’s great. We eat paella all the time and I really like chorizo.
Ricardo Urgell, owner of Pacha’s, comes aboard out of the blue. A bottle of champagne immediately appears. Not just any old bottle, though, but one of Christian Audigier’s own brand.

Christian, what gave you the idea of producing your own champagne?
Ah well, you see, as a Frenchman, I am of course really passionate about wine. Wine is in my blood. I wanted to produce my own wine…

…which comes from Languedoc?
Yes, that’s right. We produce Ed Hardy Chardonnay, Syrah, Cabernet Sauvignon, Merlot and an Ed Hardy Rosé. For two years now, we’ve also been producing a Brut Premier Cru and a Rosé in the region. You can find our wines in all the clubs and best restaurants on Ibiza. I was in Amnesia’s a couple of days ago, when some Arab princes ordered 20 magnums of our champagne.