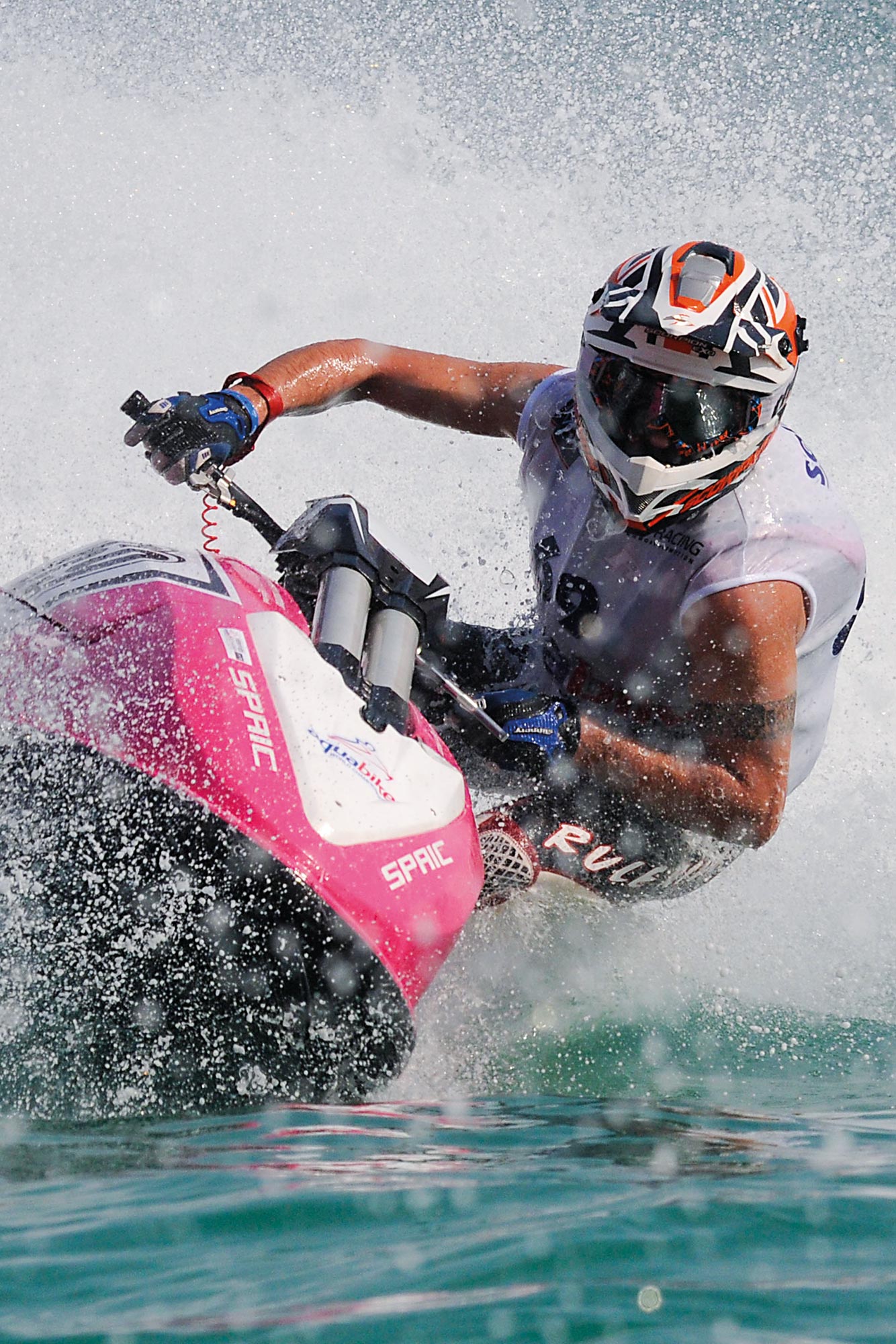 17 years ago he started out as a receptionist in a hotel belonging to the Palladium Hotel Group in Playa den Bossa. Now he’s the brand ambassador of this globally active company.

Although he is constantly away on travel for the hotel group, there is almost no important event in Ibiza at which you don’t bump into him. Years before the term Community Manager had been invented for social networks, it would have been a fitting description of him. That’s because this friendly manager is always communicative. His latest adventure takes him back to the place he used to work again, to Playa den Bossa because the “IBIZA MEDITERRANEAN GRAND PRIX” – organised by IBIZA WORLD CHAMPIONSHIP – of which he’s president, is going to take place here in September. We met Danny Gomez to talk about this mega event at Ushuaia Ibiza Beach Hotel.

Give us a brief run-down of your career. Within Grupo Matutes, what are your areas of responsibility?

My working career within the group goes all the way back to 1997. Being a sociable type and wanting to stay permanently in touch with people, I decided to start off working as a receptionist at a hotel in Playa den Bossa. From there I carried on learning about the different departments that exist within a hotel. I went on to work in several of the group’s other international destinations until I took over the position that I currently hold within the company. After all these years it’s a huge honour to be the group’s ambassador, representing its brands.

Although IBIZA WORLD CHAMPIONSHIP is a personal effort and project, it’s one that I have shared with the rest of the island from day one. The Palladium Hotel Group, and in particular its product and brand Ushuaia Ibiza Beach Hotel, have an important position and role within IWC and the development of the “IBIZA MEDITERRANEAN GRAND PRIX”. Localising the hotels and the services offered is the key to reaching the level of visitors we’re expecting over coming months. To borrow a term from the world of sports, we could say that Playa d’en Bossa and its complementary offer are in “pole position” in this event. Needless to say, the zone has managed to secure excellent positioning in recent years. I believe an event of this kind is the ideal ingredient to complete what it offers.

What kinds of events is IBIZA WORLD CHAMPIONSHIP planning to organise in the future?

We hope to continue relying on sporting events that have not yet been held in the setting of the island; ones that match both the profile of our residents and that of the people who visit us each year. As of today we have reached an agreement with H20 Racing to bring the ClassOne circus and Aquabike for the next four years.

What are your responsibilities as president of IBIZA WORLD CHAMPIONSHIP?

To be honest, we still haven’t had time to sit down and officially divide up the responsibilities between each one of us making up the IWC team. We’ve approached everything with masses of passion and energy and we’ve taken part in each and every one of the meetings, presentations, etc. But it is true that the time has now arrived to divide up the functions. As CEO of IWC my biggest responsibility up till now has been to make the project a reality and to obtain support from the brands and institutions.

How long have you been planning this event?

Well, ever since one night in July in the summer of 2012 with my friend and now business partner Mikel Astelarra. It still seems to me like it was just last night! (laughs)

What bureaucratic hurdles have you had to overcome?

When you set about organising an event on this scale, the first thing that goes through your head is whether you’ll be able to get permission at the end from the authorities and all the other public bodies.

Was it difficult getting all of the permits?

The most important aspect in this area was being patient and doing things in a conscious and well planned way. Thanks to the superb technical team that we have; the marine engineer, Pedro Puigdengoles and architect, Alvaro de la Fuente, who from the outset understood what the organisation required of us as well as the different regulations governing the areas in which the event will take place, they knew how to show the project on maps and thus start with all the subsequent meetings with each one of the public bodies. Up until now they’ve made everything possible them and thank them for all their support.

Which sponsors do you already have on board?

This has been the job that’s taken the longest over the past two years and without which the event would not be a reality today. All of those who have backed us are international brands that love the island and its people. They didn’t just want to support us because of the event in itself but rather because of everything the island represents and a staging like the one we are going to have during the first weekend of September.

How many and which local companies are taking part in the event?

There are quite a few. Mainly those offering the necessary services and logistics for the event. Two large companies from the island are directly involved and they are Marina Ibiza as the official headquarters of the village and the zone of competition boats and Palladium Hotel Group with its product, Ushuaia Ibiza Beach Hotel, with the range of 5-star accommodation and catering and leisure services that Playa d’en Bossa offers.

What problems have arisen in bringing the boats and teams to Ibiza?

Well, there’s the fact that the ClassOne boats don’t have enough range to sail to Ibiza (laughing). We got logistical support from Balearia. The port from which they embark for Ibiza will be Barcelona, where the vast majority of teams are going to arrive with their boats and logistics. Some of the teams are travelling from other European capitals and two of them from the United Arab Emirates.

How many teams are taking part in the championship and how many people are coming in total?

In the ClassOne category we are going to have nine teams as well as six P1 teams and in the Aquabike group there are more than 35 drivers competing in three disciplines. On behalf of the organisation alone 600 people are expected to arrive. You have to think that each team then brings its own guests and sponsors which, without a doubt, means a good number of visitors with considerable spending power and the desire to have a good time on the island.

How many private jets are expected?

Well, lots I hope. We’ve got the logistical support of one of the best private airline companies in Europe that’s also marketing VIP packages to enjoy the event.

How many spectators are there for the jet ski and powerboat competitions?

Both trials will be held in the zone of Playa den Bossa. The geography of the coastline itself turns it into a natural amphitheatre that can hold a large number of members of the public. Zones of stands will be set up for the occasion and hospitality areas such as Club Paddock zones.

Which celebrities are you expecting / going to invite?

The first people we want to invite are the island’s residents. It is an event by and for everyone. Of course, we are going to have more than one special guest for the event, as well as athletes related to the world of motor sports. One of the pilots in ClassOne is the well known Luca Fendi. We also hope to count on the presence as Honorary Chairman of Sheikh Sultan Bin Khalifa Bin Zayed Al Nahyan, son of the President of the United Arab Emirates, who presides over the same competition in Abu Dhabi.

Grupo Matutes + IWC – do you still have time for a private life?

The truth is that I’ve had very little time in recent years! I am someone who’s very dedicated and committed to the work I do every job and I am passionate about it. It is also true that there are times when I realise what I’m missing because of being so tired. Right now I’m motivated towards one goal and that is bringing something new to Ibiza that has never happened before.