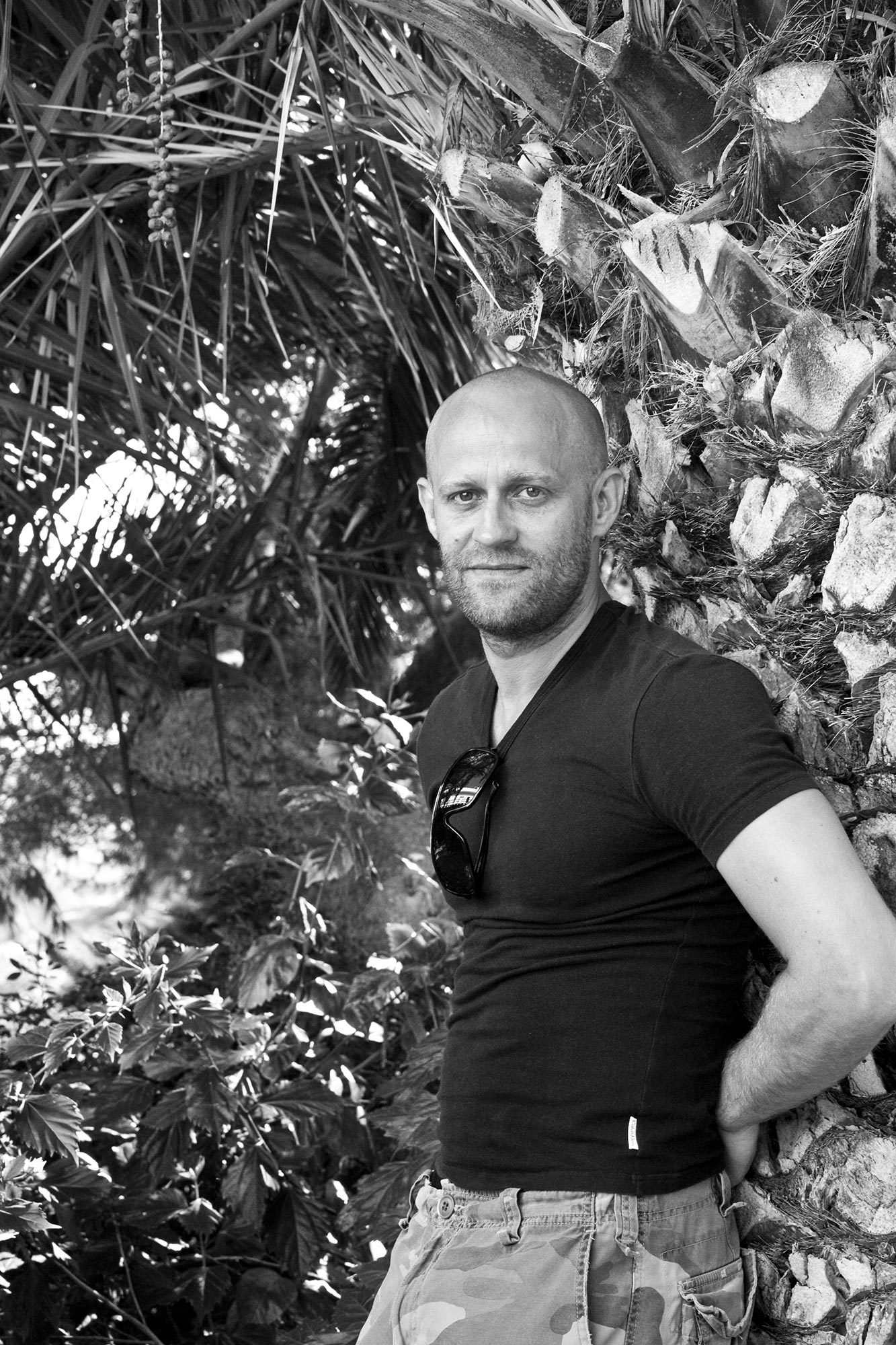 Jürgen Vogel is best known for his ‘outsider’ roles in films and TV dramas and has received numerous international accolades for his acting performances over the years. For the past eight of these, he has been a regular visitor to Ibiza. The ‘Arenal D’Or’ at Aguas Blancas has become a second home where he takes up residence several times per year. He has already booked his visit for the coming winter. For him, it is the ideal place to switch off from the demanding roles he plays and to recharge his batteries. Jürgen took time off from his busy schedule to give an interview to IBIZA&FORMENTERA STYLE.

JB: You made your first film when you were only fifteen years of age. Then, when you went on to the drama academy in Munich, you stuck it out for just one day.
JV: The drama schools in those days – and I suppose it’s still the same now – were always geared towards stage acting. And I knew right from the start that I didn’t want a career in theatre but rather in film.

JB: Right from the start?
JV: Yes. I’d already appeared in my first film and it was clear to me that if I was going to achieve anything at all as an actor, that would be the medium. I’ve never seen a future for myself in theatre. And at the academy – this was around 1985 or 1986 – they were totally focused on acting for the stage. Cinema was sort of looked down on. If you said “I want to go into film making”, they would regard that as a negative. Things may have changed in the meantime. There are drama schools that also run film courses, workshops where you can also learn how to operate a camera. But there are no real film academies as such.

JB: What was the title of this film you appeared in when you were just 15?
JV: It was called ‘Kinder aus Stein’ (‘Children of Stone’) starring Natja Brunckhorst who shot to fame as Christiane F in ‘Wir Kinder vom Bahnhof Zoo’. I played the role of a street urchin. That was just a lucky break. When I’d finished, it was obvious to me that this was something I really wanted to do.

JB: And next you went to Berlin?
JV: Actually, the only reason I went to Berlin was to escape doing national service. I just intended to register as a resident and then come back. But then I realised when I arrived in Berlin around 1985 that this was where I wanted to be. I had a great time there. It was like living on an island. There was that type of feeling to the place.

JB: You shared accommodation with Richy Müller for some time…
JV: Yes, we were in the same commune together for about two and a half years. Then I decided to assert my independence and get a flat of my own. I was determined not to work in any TV series. There were quite a lot of opportunities in soaps at the time, particularly for young talents such as myself. So I got a job working in a kitchen because that way you never starve. (Laughs) I could eat my fill of desserts and, because it was an Austrian-run establishment, they were delicious. There was no way I was going to get roped into any series. That way, you just get tied down.

JB: You often play the role of an outsider in films that take a critical stance on social issues. Would you say that you are actually playing yourself?
JV: For me, acting has always been a study of normal life. I try to get that across in the roles I play so that what the audience sees is genuine and authentic rather than theoretical and artificial. That has always been a priority as far as I’m concerned. From the mid 80s to the early 90s I tended to appear in quite a few TV dramas with a socially critical theme and I was often cast as a juvenile delinquent. I think, though, that I managed to change for the better the image of these clichéd figures.

JB: Don’t you need to have a lot of self-discipline to play roles of that kind? Did you ever worry that it could affect your mind?
JV: I did reach the point where I got fed up with it. I was playing a junky in a fairly hard-hitting TV drama called ‘The Pirate’. We spent eight weeks filming it and mixing with real druggies. I started thinking that if I only ever played roles like that, I might go crazy.

JB: How do you recover afterwards?
JV: By acting in comedies, or maybe thrillers. They are relatively relaxing for me because they are generally written to a formula where you know what twists the plot is going to take and when matters are going to be resolved. So essentially, it is straightforward acting that you can invest with a bit of character. Or comedies. I’ll do them providing they are competently written. That’s almost like a holiday for me.

JB: And presumably you find Ibiza relaxing too?
JV: (Laughs) Oh, yes… I first visited Ibiza when I was sixteen. That was my first real holiday without my parents and I was in Ibiza on my own for four full weeks. I had a base in San Juan belonging to a friend of mine who was an artist. And basically I just scrounged all the time I was here. Good Lord; that was 24 years ago! What a fabulous experience. Then I seemed to lose sight of Ibiza for a while.

JB: But eventually you did return?
JV: About eight years ago, I came back to the Island and ended up in Arenal D’Or. I thought it was wonderful. Since then, I’ve been coming back every year.

JB: You said earlier that you didn’t want to act in any series. I’ve just read, however, that you’ve been signed up for a role in ‘Schillerstrasse’. If that isn’t a series, then what is?
JV: Well, by ‘series’ I mean a TV soap where the formula is always standard. Like in a detective series where it’s essentially the same every episode.

JB: So would you say that ‘Schillerstrasse’ is more about improvisation?
JV: That’s what I really like about it. After 25 years in this business, I was asked whether I’d like to give it a try, so I watched a few episodes. I was already reasonably familiar with it. Improvisation isn’t actually anything new for me because I’ve often done that in films. It’s something I very much enjoy doing. If the combination of people is right and everything gels properly, the results can be great. It’s even OK if things go slightly wrong because that adds a bit of spice to the occasion. I’ve been involved with the show for a year now. There are 24 episodes spread over a twelve-month period. That makes 24 working days which I find OK. They used to make a lot more – 40 or 45 of the things. That was tough going. But 24 or so – that’s good fun. It’s just up my street because I’m keen to try it out. You always need to do something different in life.

JB: So you feel this urge to try out new things?
JV: Definitely. It was always the same with music as well. It’s terrific fun to see or hear something new and to experience the pure pleasure of experiencing something different for a change. The same applies in any career. I revel in it!

JB: You just spoke about making music. You once said you’d like to move to Ibiza, buy a house here and become a music producer. How would you classify your tastes in music?
JV: I made a brief excursion into the music scene when I produced a film called ‘Keine Lieder über Liebe’ (‘No Songs About Love’) in which I also acted. We set up a pop group called Independent Mucke. Then we went on tour with this specially created band for three weeks. They were all lads from Hamburg from the same generation as me which was great. We had three cameras and just made the film spontaneously without any script. Afterwards, we did a few more tours, the last one just a year ago. And then, because I know Campino quite well – he’s a big name in the German music scene – and he has a house not far from here, I thought it would be great to come here in autumn when it’s really peaceful but there are still a few decent shops and restaurants open. I’d produce some records and meet up with a few musicians. Then, while the production process was carrying on, I’d take a dip in the Med. Superb idea, I thought. Certainly better than staying in Berlin or Hamburg.

JB: Will you be back this winter?
JV: Yes. I’d like to return when it isn’t so crowded, explore the area on a quad bike and clear my head a little. I’d also like to work with a friend on a film script because this is the perfect place to get your ideas together and relax at the same time.

JB: Thank you for talking to us today.