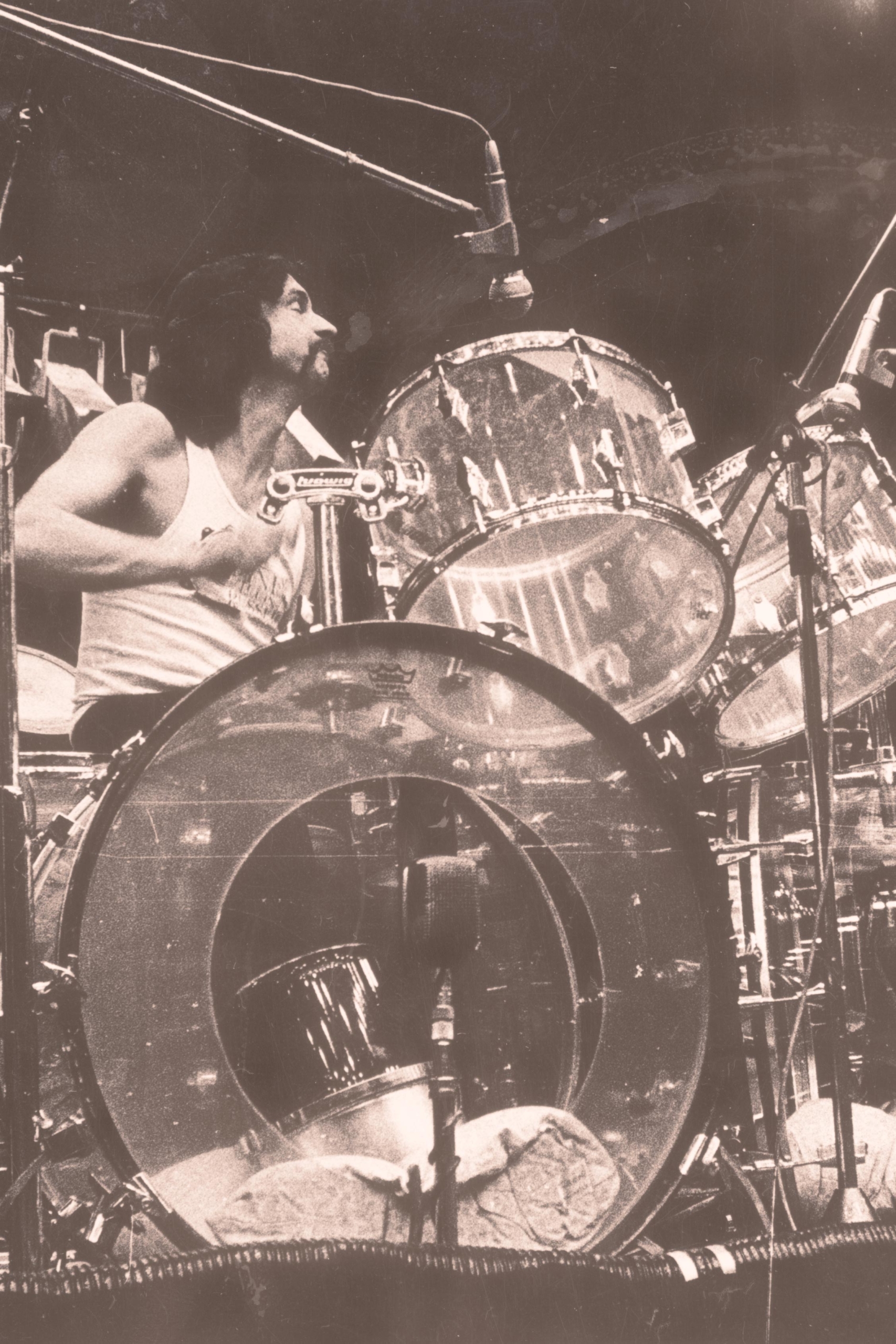 How very apt I thought to myself. As the whirring blades of a Guardia Civil helicopter up above shattered the serenity of the peaceful Ibiza morning keeping a watchful eye on the King of Spain aboard his yacht down below, grinning opposite sat our very own member of the royal family…albeit of the musical kind.

Whilst the 1980s saw DJ Alfredo kick start the White Island’s first foray into peace, love and harmony – 20 years earlier a bunch of talented teenagers from academic backgrounds met up in Cambridge and London to form one of the biggest rock bands ever…right in the middle of the very first summers of love. 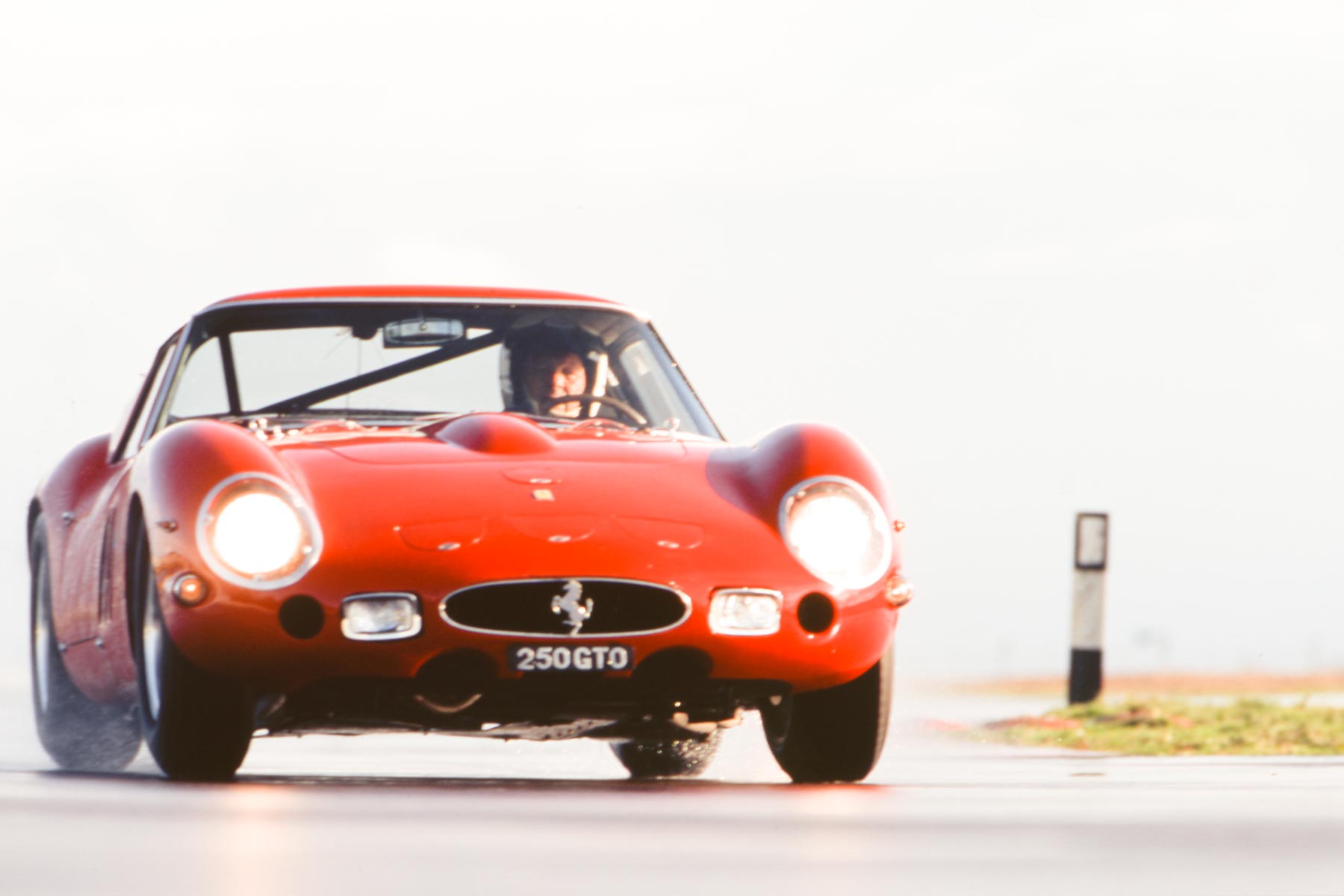 With over 250 million album sales tucked safely under his belt Nick Mason has every right to look a happy man today. I point skywards at the chopper disappearing into the distance and ask him about his love of the air, he owns a couple of his own flying machines which he loves to fly. “It’s funny you know. Pink Floyd had to travel on planes so often around the world and I was absolutely terrified every time. Then a friend who was a pilot took me to one side and said, ‘Nick – the only way you are going to conquer your fear is by actually learning to fly’. And he was absolutely right. I have to admit though, it was the most expensive therapy ever – but it did the trick” he smiles.  My wife Annette now flies as well, but rather irritatingly, she just learnt for enjoyment!”

The Masons have owned a house in Es Cubells for a while now and the couple are much loved faces on the island. They first arrived on the Ibiza shores on the boat of Queen’s Roger Taylor, moored in the port and let their two teenage boys go and discover. They didn’t see them for days as they were having so much fun, the seed had been planted.

Most dudes in their 70s would be quite happy with a good book and a nice cup of tea as they drift into their twilight years, but not this drumming genius. Last year he was spotted on the dancefloor at the Opening of Space, a David Guetta party and a Pete Tong allnighter – there is life in the old dog yet. What does he think of the wages some of these DJs are now getting I ask him, do you find it offensive? “At the end of the day business is business and the market will always dictate what people get paid. I have heard these tales of Calvin Harris getting paid a million dollars over in Las Vegas but so what? Look at the salaries famous footballers are getting and whose to say Pink Floyd were perhaps overpaid when we toured America? One of the things I do find fascinating these days though is the whole ‘DJ term’. Look at the contrast of when an old 60s DJ like Tony Blackburn was playing records compared to the likes of geniuses of today such as Goldfish. The days of a DJ simply being someone who puts on a piece of vinyl one after the other are long gone, the construction of a set today is unbelievable. One only has to look back at the days of Phil Spectre and Trevor Horn when it was more about the producers than the singers…and that’s how it is for a DJ in 2015. They are the pop stars, it is these guys now making the serious money and being able to drive a Rolls Royce into a swimming pool if they so wish.”

Ahh, I was wondering when the subject of cars would come up. Iconic racing driver Stirling Moss once described the term ‘ten tenths’ “as that rare, if ever, fleeting moment when a racing driver and his car are at their ultimate limit.” A perfect name then for Nick’s company in the UK which looks after his own collection of sports and racing cars. These machines of beauty include the 1901 Panhard et Levassor, Bugatti Type 35B, Maserati Birdcage, Frazer Nash, McLaren F1 GTR and of course his world famous Ferrari 250GTO which is worth tens of millions of pounds. “I always bought cars not because I wanted a collection but because I wanted to go motor racing, years ago though when we started to buy these cars we always had to take a deep breath before signing the cheque. Not so much because of the money side of things, but because we were going to look so idiotic buying them. But I loved all that!”

What does he think about the summer traffic problems of his beloved Ibiza I ask him, every year the tailbacks start earlier and earlier? “Oh it’s just like everywhere else, more and more cars on the road and they are all getting bigger. I’m not just talking about the Hummers of this world, even a new Golf looks like a MK1 on steroids now!”

In my opinion though the supercar of the future is the electric car. We are not ready for them yet, there is too much financial plight around the world for a major investment, but they indicate the future.”

One of the most endearing qualities of Nick Mason is this desire to be always looking to the future, never really that bothered about talking about the good old days of Pink Floyd and totally acknowledges how difficult for young musicians to break through today. “The main problem is the actual monetizing of music, the art of selling recorded music is now almost hopeless and the days of it being a serious income stream are long gone. How then does an artist make that step to getting established and earning some money with live gigs, it’s impossible. Then we have the problem of the record companies who are investing so little nowadays as there is no return. There was a time when a label could sign anyone they liked, try them out and see if they worked. They took risks. And that doesn’t happen any more. I am interested in the whole current landscape of the industry and actively involved in it with my role as Co-Chairman of The Featured Artists Coalition, which is a Lobby Group, that amongst other issues tries to influence government legislation on matters such as pirating and copyright. On that subject, I implore anyone who makes a living from music to join up, it’s free! And the more people on board the bigger and more influential we get.”

Pink Floyd were of course the masters of the live gigs, far out thinking all of their counterparts with dynamic liquid light shows, their 50m high brick wall, flying beds, the large scale model plane crashing into the stage, pyrotechnics, huge inflatables, giant glitter balls, the floating giant pig and refrigerator filled with snakes and of course the puppets. “I think it is remarkable how much technology has advanced since the days of The Wall 30 years ago. A friend of mine called me recently and told me excitedly about the incredible production ‘Take That’ were putting on at their shows – and what Coldplay did with their illuminating wristbands was marvelous. As a band we realised pretty quickly that due to the size of the stadiums that Pink Floyd were performing in, you could do so much more than the other bands who just had a camera on themselves filming onto a big screen.”

So what of those other bands back in the 60s – was there any real competitiveness with the likes of The Beatles, The Kinks and The Stones? “Well when we came along we were the new boys on the scene compared to bands like The Beatles. We were in the third form whilst they were already up in the sixth, but yes there was competition and pretty hardcore at times. Getting a No. 1 record was always a hard fought battle, but as time goes on you become friends with these guys and it becomes less relevant. I have to admit though, it was lovely last year when we released our album The Endless River and I noticed we were outselling One Direction.”

Do you still go to live gigs I ask him, you must if you are still going to the Opening of Space? “Ha ha, yes I still go out. I love Eric Clapton especially when he is on with Steve Winwood, Peter Gabriel is great, and I have to mention The Kaiser Chiefs and Sea Sick Steve, all brilliant! Funnily enough the last gig I saw was in a little pub in England where my son was playing R&B, it was different, but I really enjoyed it.”

And with that he finishes his coffee and contemplates on what to do on another beautiful Ibiza day. “The best thing about this island is that it can be whatever you want it to be. There are no rules. You can do your hippy thing in the north, the Ibiza chic in the south and most of the time you wouldn’t know the clubbing is going on. It’s perfect.”