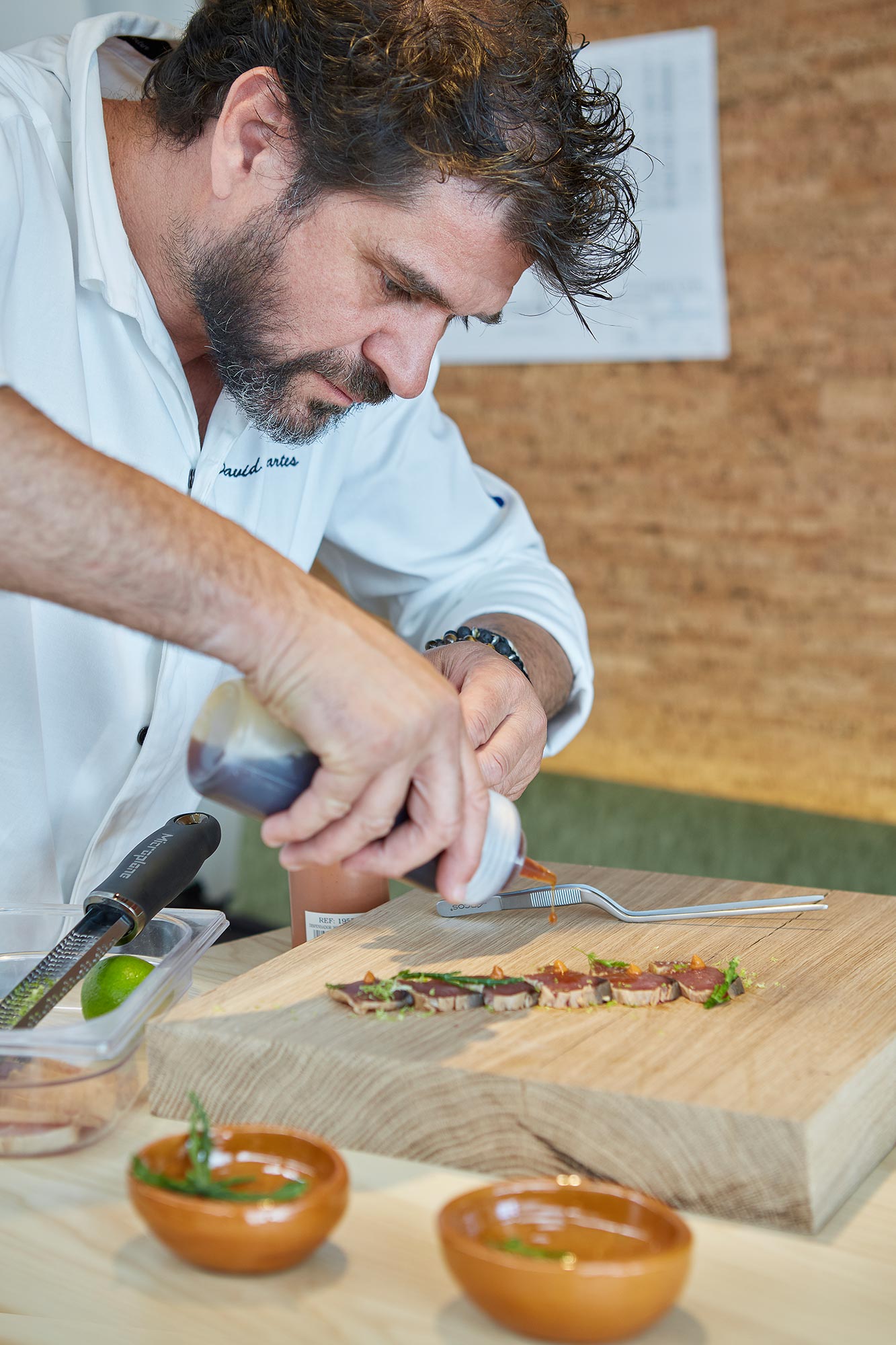 Everything comes back again, but evolved, different, in another way. A concept reflected in those patterns that are repeated and to which David Reartes refers when we admire the beautiful Ibicencan tiles on the floor of Re.Art, his new venue in Ibiza. “They are like the tessellations of life, like taking a step backwards to go forwards again”.

Located right in the centre of Ibiza Town, for David, Re.Art is a dream come true. It’s a project to which he has devoted the last three years along with two good friends: Joan, from Maderas Planells, and Jordi, from Sa Caleta restaurant. “We’re three nutters who got together”. The original idea was to have a tapas bar with a culinary workshop on the top floor. However, in the end, both ideas fused to turn Re.Art  into a unique gastronomic venue from which to develop, create and, above all, enjoy. The fact is that, having passed the age of 50, for David this project “Is like a present that I am giving myself”.

You can see just how much love has gone into it down to the tiniest details such as the beautiful plates made by the potter, Toniet, based on Ibicencan moulds used 50 years ago to make cheese, or the impressive bar made out of ash wood, “They are my little gastronomic dreams”. It’s a diaphanous, light-filled restaurant that is decorated with simplicity and good taste and where everything refers back to that idea of an artistic workshop. A dynamic, informal, fun place, it’s a restaurant without private areas that turns into a huge table where you can sample, try out and observe live the work of this great chef: “For me, that’s what gastronomy is about”.

David holds to the philosophy that has characterised his cuisine for years: simple dishes based on first-rate produce-most of it organic, locally sourced and at an affordable price. The menu, in which there will be a number of regular dishes and lots of room for creativity, is based on traditional tapas to which David introduces a new twist: from patatas bravas in sea cucumber ‘suquet’ with rooster’s cockscomb to the indispensable croquets, squid, mussels marinated in citró de matanza, salads, meats…anything you can imagine in the form of tapas: “I wanted an old-style tapas bar”. The team is made up of waiters who are cooks at the same time, “Who better to be able to present or describe a dish to you, or know which wine matches it best?” It’s a new and highly qualified team with experts who have arrived from restaurants that possess up to three Michelin stars: “I like to surround myself with people that can provide me with something so that I can grow, the truth is that I’ve got an amazing team”.

David has devoted himself to cooking for 30 years. It’s a passion he inherited from his mother-a great chef, bohemian and bon viveur-who used to take him to the best restaurants in the world: “You can blame my mother for this ‘ailment’ of mine”. When he was a teenager, he used to get up early on Saturdays to go with her to a restaurant in the industrial zone of Barcelona to breakfast on tripe, grilled langoustines or eels. It’s something he vividly and fondly recalls and which the chef intends to put into practise at Re.Art by offering some original hearty breakfasts too.

The range of cocktails is going to be another one of Re.Art’s main attractions with very amusing cocktails that will match the dish at that moment. They will also serve ‘Cocinillas’, a red wine created by David in the bodega of Jiménez Landi, based on Syrah and Garnacha grapes and whose label he also designed himself. As far as the desserts are concerned, David announces that-among many other original and entertaining dishes-they will serve a rerun of ‘Drácula’, the ice lolly they used to serve in ’96 in his restaurant, Santa María, in San José, a homage to the famous lolly made with red berries coulis, fresh strawberries, vanilla cream and topped with coca cola foam.

On the San Antonio road, you might well have seen a billboard with an impressive spoon of the kind used in traditional pork feasts and the slogan, “Eat to be happy”. It’s the big logo of David and Re.Art made by the graffiti artist, Jerom, which is also going to be at the entrance to the restaurant. “This project means going back to what is purest, to doing what I like to do most: cooking right in front of the diners”. Because the truth is that you come to Re.Art to enjoy with all the senses, to savour tiny mouthfuls of happiness in the form of tapas.