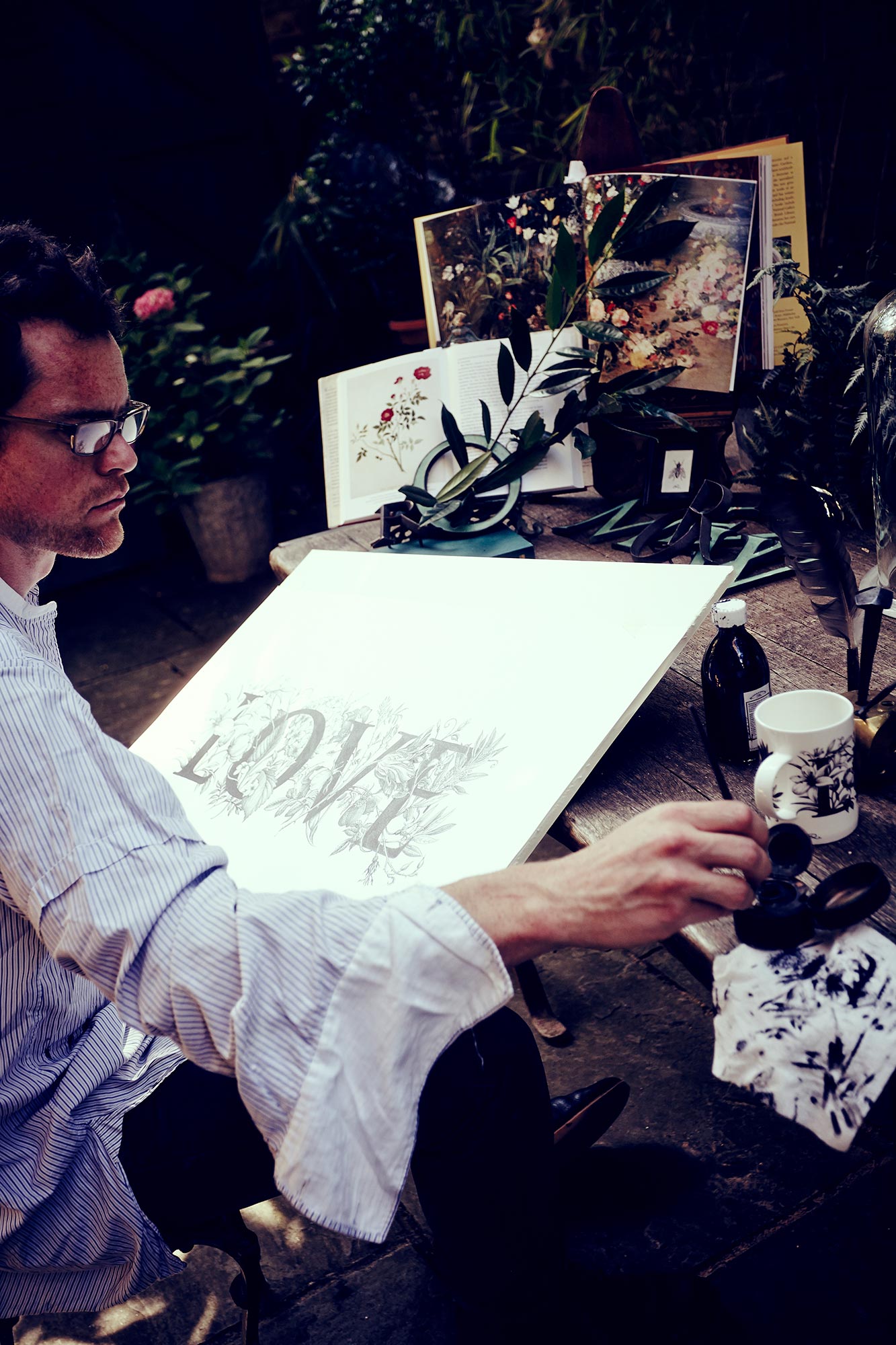 “I was always obsessed with drawing,” Rory chuckles. “I presumed all adults were good at drawing, I didn’t know any different. From a very young age I used to ask my father to draw something for me, like a horse, and he would draw and it would look exactly like a horse. It was only when I asked my mother, and I never asked her again, it looked more like a tortoise.”

Rory, who has a base in London and in Ibiza, says his “obsession” was pretty extreme and continued throughout his childhood. “It often used to get me into trouble. I once used up all my dad’s fax paper, you know the sheets with all the perforated holes. He would describe is as like an Andrex puppy at the end of a toilet roll, I had just scribbled all the way along all the paper. In the end he built me a blackboard so I could rub out mistakes instead of using all his paper. I once drew on my mum’s wallpaper, she had tiny polka dots and I thought, wow, if I join all the dots up I can make a huge bear. I went to get her and said ‘hey look, I’ve improved your wallpaper…’ then I got grounded!”

But that wasn’t the last time; “My dad showed me a Henry Moore sculpture once and I was really interested in the fact his name was on it. We had a VW Beetle when we were growing up and that looked like a Henry Moore sculpture to me so I decided to sign it and I went off to get a screwdriver and scratched Rory into the metal. He went way more mad than my mother.”

Fast-forward to his adult life after studying at Central St Martin’s School of Art and Design in London – and he has been commissioned by many impressive names such as Liberty London, Fortnum and Mason, Agent Provocateur, Christian Dior and many more including Pikes, here in Ibiza.

He sites influencers as Rodin and Michelangelo – artists who were creating mega scale pieces – also Hieronymus Bosch too.

Imagery in the childhood books, Winnie the Pooh and Alice in Wonderland are a strong influence to his ink illustrations. “It was the simplicity and effortlessness – you can have a couple of black lines but you can understand that is a wild bit of the woods in England and you can feel the atmosphere and the bees buzzing. You don’t have to paint the entire scene in to get that information.”

The infamous London store Liberty was the first to stock his work and its popularity soon spread beyond to retail outlets around the world including Japan, New York, and Paris. London’s iconic Fortnum and Mason approached him initially to draw their shop front for a tea set; the owners loved it so much they had it printed on building-sized hoarding to hang on the store’s facade while renovation work was carried out. And it grew from there with numerous homeware designs recently including a Queen’s Platinum Jubilee collection. 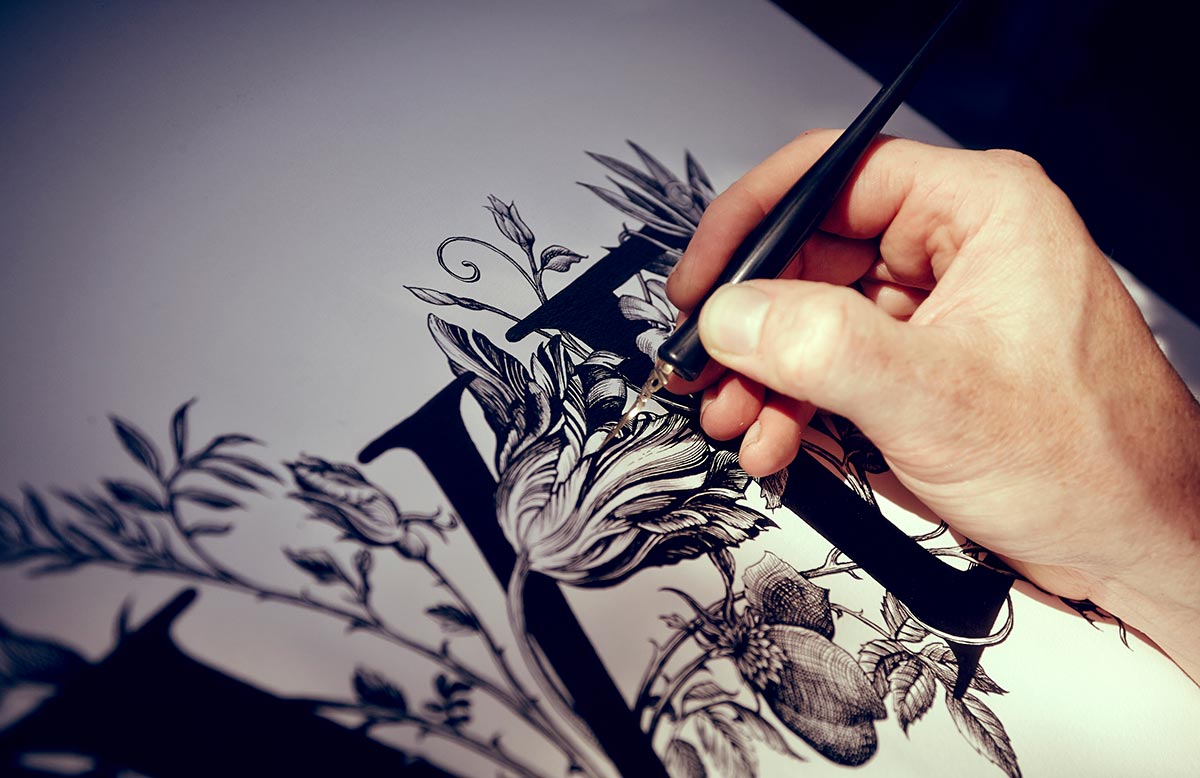 Rory first came to Ibiza with friends from Manchester, who went on to be the architects behind Manumission – Dawn Hindle and Andy McKay. This has led to him creating many of the famous wall illustrations at Pikes Hotel, on the outskirts of San Antonio. The Monocle Cat and Smokey Fish – just two of his iconic designs.

“Ideas are often born out of daydreaming. I kept seeing this guy outside an office smoking at all times of the day. It was like he spent his whole day out there, I thought he must be incredibly bored, his life is like a goldfish, going around and around doing the same thing all the time. So I drew it on the back of a map, or whatever I had at the time. Then I was thinking about the smoking zones and how it can be seen as rebellious. So I thought, my fish can smoke but that’s the ultimate no smoking zone – underwater. He’s so rock and roll he can smoke underwater.”

Some themes from the famous British spy thriller James Bond influence another iconic image of Rory’s. He explains: “It had been pouring with rain for months and months and I’d watched lots of Bond films. The cat is a mash up of some the villains.”
Blofeld’s famous cat, of course, in the central role, but with Oddjob’s steel rimmed bowler hat and Dr No’s monocle. “I just thought, he’s not an evil cat, he just has an evil owner but just imagine he must overhear all these evil plans. I thought this expression, he’s just heard this evil of evilest plan and he’s gone ‘oooh this is a good one!’”

“It was amazing speaking to Tony (Pike) and he was telling me all the stories about the people who have stayed there, all these amazing parties, the crazy things that have happened there.” Rory says he started painting characterful numbers on the doors of the hotel rooms, but then was welcomed when he suggested painting on the walls. “We stayed there as long as I was painting – it went from the Spring to the Summer and my kids were hanging out with all these rockstars and musicians. Tony was really up for it – he thought the drawings were great and breathing new life into the place.”

Rory wrote a book called the Ink House – he owns a reformed finca in the north of Ibiza that carries the same name: “As I am always leaving the doors open to my house in Ibiza, I am always finding geckos and cats have wandered in. So I was imagining if I left the house for years and years with all the doors open, what all the animals would get up to. You’d have birds nesting on top of the wardrobes and that kind of thing. But I took it to another level and the longer they spent in the house the more human they became, they would wear clothes and reading books and playing piano.”

Looking to the future, Rory is concentrating on his Alice in Wonderland collection.