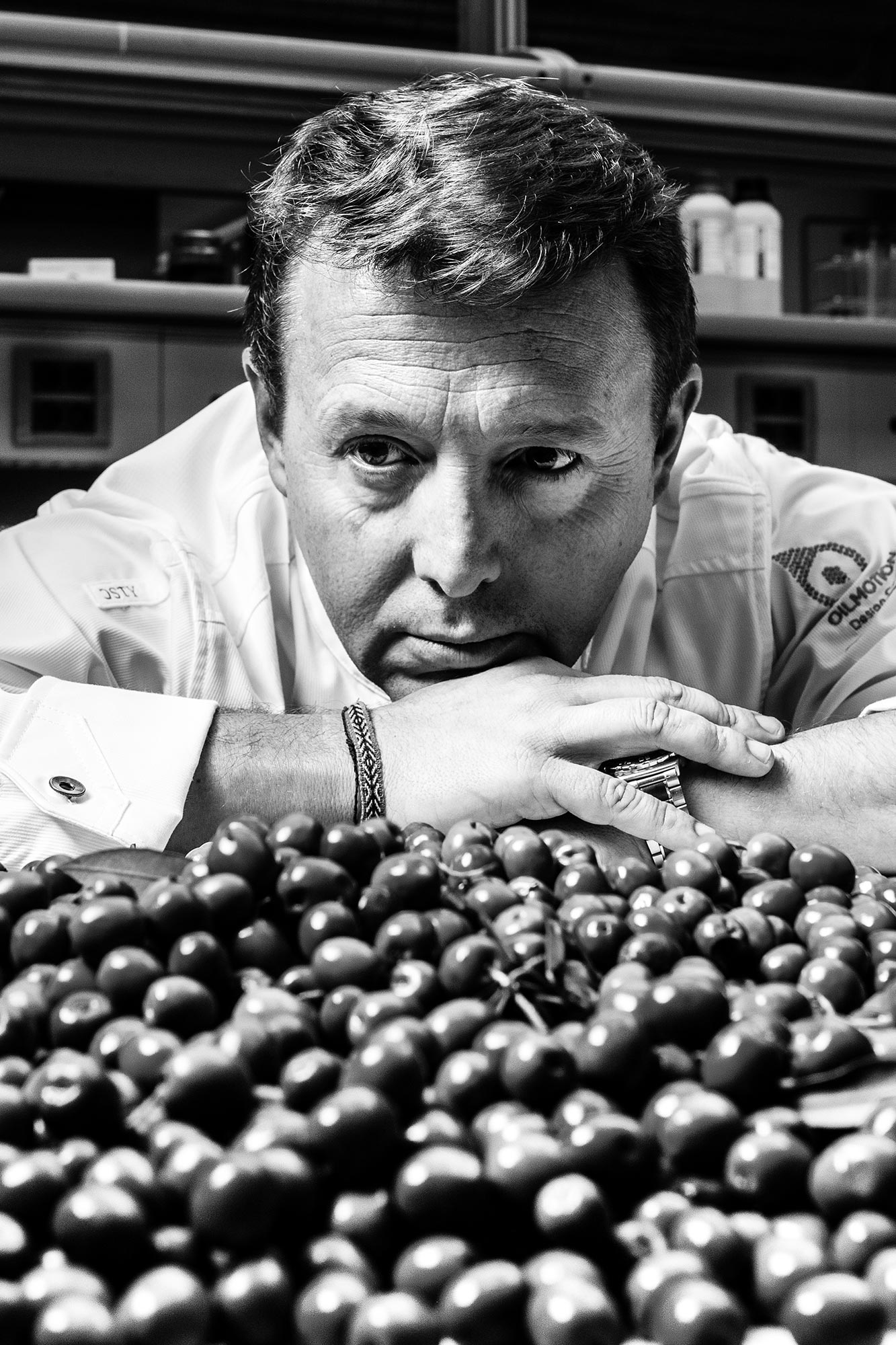 Now he’s backing Oilmotion, an enterprise that has turned him into the great international ambassador of this product. Oil may be about to have its day…

How many stars should a chef who got rid of spare tyres be awarded?

None I think, now that having a dadbod is in fashion. But it’s true that a star in the kitchen or a restaurant is when the customer comes back and you feel proud of what you do. A restaurant is not just what you eat, but the overall experience you have and share. There are lots of stars that work too many spare tyres not off the customers but off those who are doing their very best every day with humility and constant hard work.

Is this culinary boom going to blow up?

I do hope not!! As long as we new chefs keep our feet on the ground to defend a job that is not a reality show but rather a great deal of sacrifice many hours a day.

In lots of other trades the bubble bursts but those who have done a good job have got a future and they’ll always be around. It’s what you call a classic; somewhere you can’t stop going, not because it’s trendy, but because of the idea, quality and respect.

How does the fact that cooking has taken off with the economic crisis go down?

Cooking didn’t take off with the crisis; it’s always been around in all shapes, colours, textures and more, but it’s true that with the reality shows it seems like we’re taking off.

The problem is that everyone thinks they can open a restaurant; that is true but it’s one thing to open one and quite another to run one. I’m a chef and I can assure you that however easy something as simple as painting a room or making a piece of furniture appears, I have to admit that I wouldn’t know how to set up a business in that field. You’ve got to really respect a professional because behind everything you see there’s a huge amount of work. Ours is a generation of chefs not because we are famous but because we understand that this job is a way of life.

How many chefs are having us on?

Ha ha, the truth is I don’t know, but it’s going to backfire on anyone who’s fooling people before they know it. The people who respect this line of work don’t have you on because they are professionals and should be recognised as such.

Will fast food end up being costly?

Good fast food always has been, is and will be expensive since behind every product there’s great expertise and respect. Saying whether something is expensive or cheap is very relative. Is bread with tomato expensive? It doesn’t just depend on the quality, as many people think. It also depends on whether you grow the wheat, the flour, the dough, you grow the tomatoes or you make the oil. As you see, behind every product there is respect and expertise. How do you work out the price of that?

What have we got to take not to choke on the upcoming (Spanish) elections?

Lots of water because it seems like a triathlon. The difference— apart from the effort— is that it never ends: in the sport they change discipline and everything changes but in politics the parties change and everything goes on the same.

If oil is liquid gold, then why is a skip full of olives so cheap?

Just like I said; many, many things are important when it comes to making good oil: studying the climate, the equipment, the weather, etc. And the most relevant thing of all, something to which we don’t attach much importance here but they do in other countries, is professionalism. Everything has a price and here, for many reasons, the customer no longer trusts anything or anybody. People think they can get rich by deceiving them and I assure you that in this line of work the person who loves what they do tries to give their very best at the best price. However, I’ll say once more that what you see or what it looks like is not the only thing that counts; the surroundings, where it’s come from and the quality also matter.

Is butter a rude word?

Lots of people butter us up ha ha ha, but the fact is that butter is like everything; good butter is something incredible even if many people have given us all sorts of things instead of butter and they’re the ones who really deserve rude words.

Will the United Kingdom leave the EU before olive oil is used in its frying pans?

No, the truth is I love the UK. For me, it is much more than an island about which people who do not know it say you can’t eat well there. I can assure you that after having spent many years living in that amazing country olive oil is used in many frying pans. However, it’s true that butter colonised the first great kitchens in London; though oil is used it is done so very sparingly because of the high cost of good olive oil.

When will there be a variety of olive oil that does not taste of oil?

Prepare me a full menu for Rajoy and Puigdemont in a bilateral meeting in Ibiza.

A bowl of all i oli so that they agree on the meal and I’d start with a rustic salad with toast, tomato and dried fish with a good olive oil from the islands. After, either arroz de matanza or bullit so that they see you can eat fish with potatoes first and rice afterwards. For dessert, flaó with hierbas de Ibiza.

Do you think there’s been a two-party system in Spain of paella and ham?

I don’t think so! Because food isn’t politics; it’s culture. I can understand good bread with tomato with a good ham and I can understand good paella that can be just as good with or without onion, like a Spanish omelette, and there’s no accounting for taste. The last thing we need is not being able to say what we like or do not like. Just imagine if we started saying how we’d run the country or a football team!!

Tell me about a nightmare you’ve experienced in the kitchen

The truth is I’ve had quite a few but the worst nightmare is when you work with people who don’t love the profession, who lose respect for it and so this way of life too. But I know what you’re on about; I can assure you the truth is stranger than fiction. I prefer not to explain because then people know everything ha ha ha.

If all the Chinese jumped up and down at the same time would all the olives fall off?

Tell me an original recipe that you can make in the time it takes to read this interview.

While you’re reading the interview toast some bread over the fire or in a toaster, spread OilJelly olive oil jam on it, then grate 70% cocoa dark chocolate on it and add a little salt from Ibiza. The interview will be more amusing and the person reading it will understand a bit about me and what I was eating while I was being interviewed.