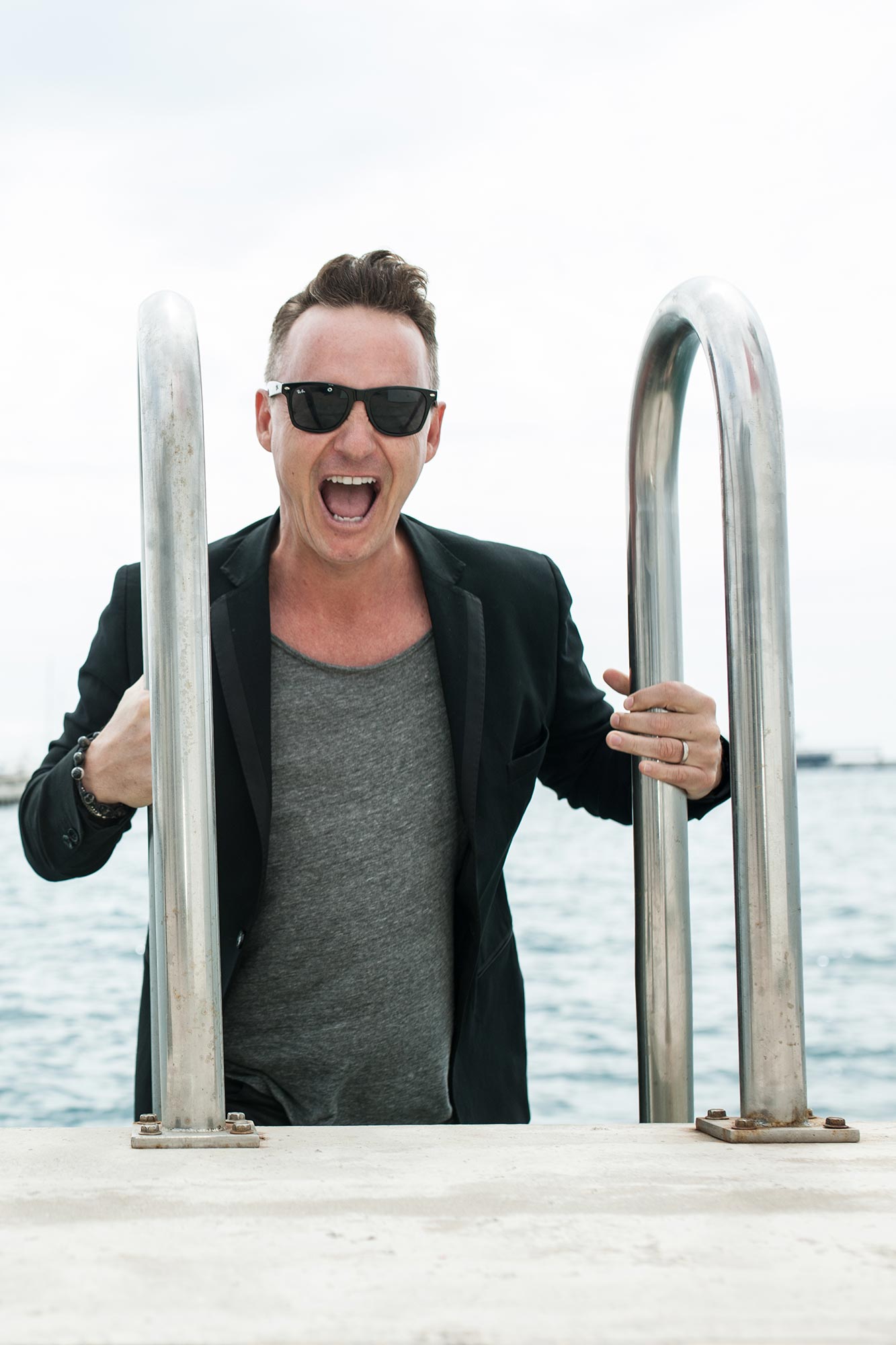 Striding through Marina Botafoch in the morning sunshine Jean Claude Ades looks every part the superstar DJ. Leather jacket, expensive trainers cool enough to get a second look, the obligatory sunglasses and a mobile phone pressed to his ear talking music to someone in his busy disco world. It’s a far cry from the first time I ever set eyes on this mesmerizing French German producer some ten years ago doing the walk of shame home after a crazy night of partying in Ibiza. “I will never forget that night” Jean Claude says with a grimace, “I was at a villa party up in the hills and I didn’t know anyone. It got to 11 in the morning, the people were still partying and I just wanted to go home to bed, I was finished. And so I had to walk home, it took me over three hours. Never again.”

These summer you’ll find Jean Claude spinning among others at Beachouse and Blue Marlin on the island but it’s his Be Crazy nights at Lio that have suddenly become one of the ‘must do’ parties of the week, an incredible feat putting on an event with so much underground energy at such at a commercial venue. “For me it is perfect. There are not so many places around the world which have such amazing settings as Lio, perhaps Cavo Paradiso in Mykonos and Blue Marlin Ibiza in Dubai, but this place has it all. What I wanted to do with Be Crazy was create a real family vibe, an intimate night where everyone knows everyone, love their music and likes to party. Of course it was daunting to begin with, bringing my deep sound to a venue normally associated with millionaires, cabaret and fine dining, but that’s what life is all about…taking up a challenge.”

It’s funny to think though that this young man never actually wanted to be a DJ, his first love was in the studio producing big tunes rather than sending people crazy in person. “I always wanted to be in the background but once you step into this world it’s impossible to leave, it’s so addictive.” And who knows?

Without the gentle persuasion of his brother Maurice, Jean Claude may have never set foot on the white isle where he now lives in Sant Jordi.

“It’s so true. He was always saying to me ‘Jean Claude you have to come over and play in Ibiza, nobody has heard of you here when I mention your name’. And so reluctantly I came over many years ago and played some villa parties, El Ayoun, Amnesia and Blue Marlin and slowly worked my way up working for hardly any DJ fee even I was already touring for many years around the globe and playing in sold out venues”

This summer Be Crazy will yet again play host to another stunning selection of hand picked guest DJs joining Jean Claude in what he calls one of my favourites DJ booths . “It is really important for me to have that friendly vibe every week and that is reflected in the DJs I have invited. To open the Be Crazy summer season I am happy to have Marcus Worgull from Innervisions as my guest. I have known Tiefschwarz for many years, Betoko really surprised me last year with his warm up set he put the club on fire, I have a track coming out on Be Crazy Music with John Monkman in June whilst MANTU is my label manager and is also doing great things in the studio. I can get 30 people into my booth at Lio, it’s like we’re having our own little house party within the club some weeks.”

One of the main reasons Be Crazy is so successful is that outside of Ibiza, Jean Claude’s night puts on parties all around the world…and when these people come to Ibiza, there is only one spot they head for. “We have our own crowd at Be Crazy – freaks, clubbers, VIPs and party people from Miami, New York, Paris, Cannes, Milan, Rome, Munich, Berlin, Dubai and London who help make Thursdays so cosmopolitan.” It’s a vibe I suggest that only can be found at a few places on the island? “Without doubt. Mondays on the terrace at DC10 or the VIP section at Marco Carola’s Music On night are similar, every time I go to one of these parties I see lots of familiar faces I know from Be Crazy at Lio.”

2015 sees competition arrive on Lio’s doorstep in the form of Cirque du Soleil, the Ferran family and their Heart restaurant at the Ibiza Gran Hotel, an opening he is relishing. “People are always complaining about the whole VIP side of the island, for me it is great. It brings new people to the island and helps to keep a balance between the underground side of things and the more commercial element.

Jean Claude Loves to Be Crazy…

A crazy thing you did as a teenager that you got into trouble for?

“This one time when I was 14, I jumped over the balcony at midnight, took my bike and cycled to the house of my girlfriend. Back at the family house my mother closed my bedroom window not noticing I was gone as I’d put some pillows under the blankets to make it look like I was sleeping. I had to telephone my parents to let me back into the house, I was under house arrest for a week.”

The craziest DJ you know?

“Back in the day, without question Sven Väth.”

The last time you got crazy at home?
“When my dog Lily somehow got into my studio and left here hair everywhere.”

The last time you went crazy making a record?

“Last winter I locked myself in the studio for six days with no phone or internet, all by myself. I slept there and just worked, worked, worked. It was amazing. But crazy.”

What makes you crazy in today’s busy world we live in?

“Selfish people. And also DJs who have ghost producers and pretend that they have created their own music.”