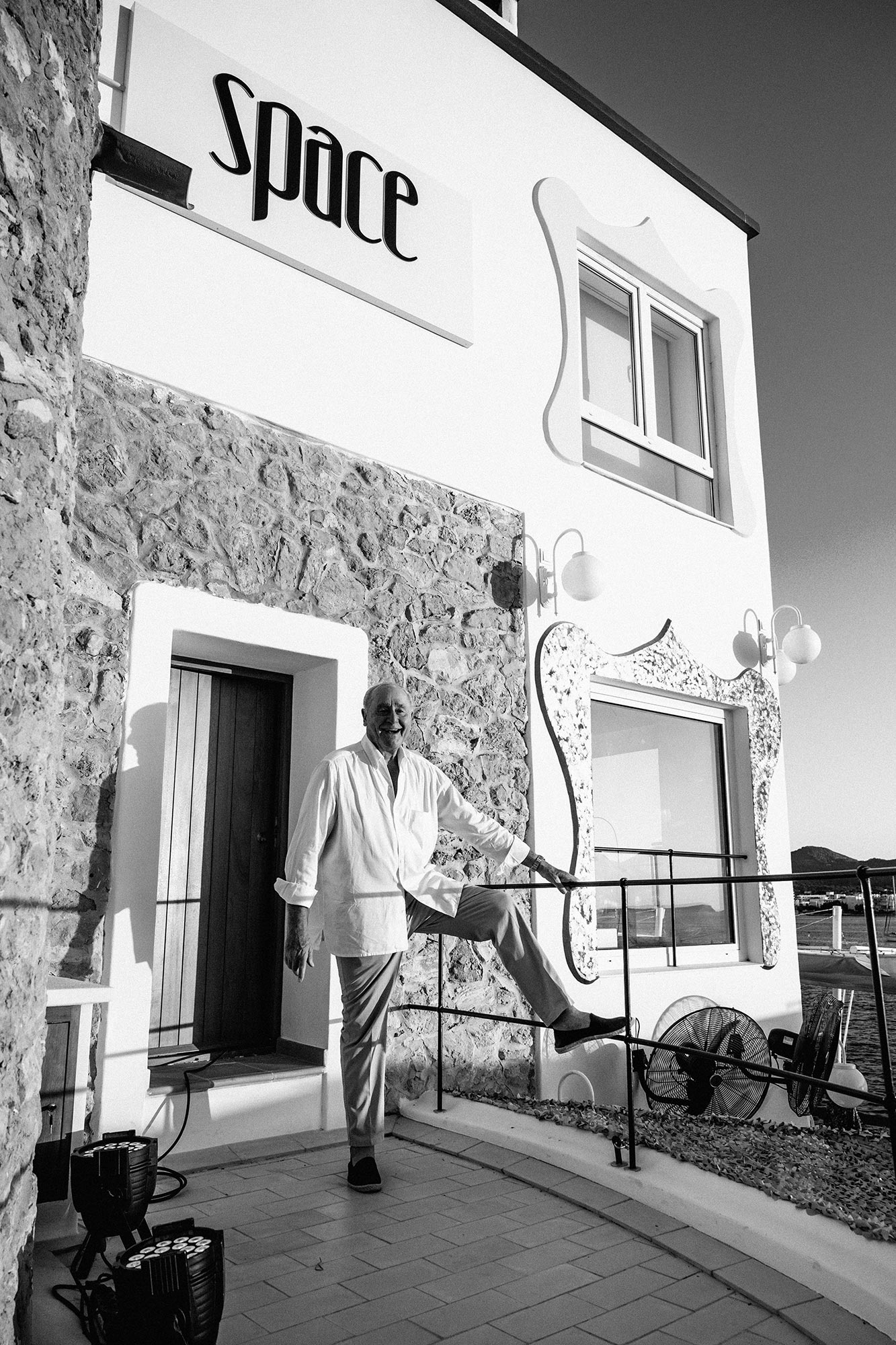 Pepe Roselló (Sant Antoni, 1936), forerunner of the Ibiza nightlife scene and owner of the legendary Space club, is not bowing to the tyranny of age and is back, more eager than ever, with his new restaurant, Space Eat & Dance, with a gastronomic-cultural proposal in front of the best and most emblematic sunset to the rhythm of lyrical music. We had a good time chatting with him about his new project and, of course, about Ibiza.
Let’s talk about his new project Space Eat & Dance. Pepe, are you looking forward to reopening a venue in San Antonio?
Very much so. It has created a new vision of myself, I can’t stand still. This new project is a magical opportunity to set up in the idyllic setting of the San Antonio sunset. The past and the present come together in this setting frequented by characters and people who are part of the Ibiza we dream of. It was born a little late after the closure of Space. I presented a great project for a 4-star hotel but the Sant Antoni town hall refused me, we still don’t understand why. I think we’re all in a boat without a rudder, that’s going nowhere. Each town hall is going its own way, the Consell Insular doesn’t put order between the town halls either. It is chaos.

What gastronomic offer does Space Eat & Dance offer?
It is based on these fundamental concepts: tradition, modernity and art and flavour. It brings together the flavours of grandmothers translated into modernity. It is a combination of colours and flavours that bring you closer to the light and the sea. According to our chef, José Miguel González, who has worked in the best restaurants on the island, (in fact he started his career in one of mine: s’Olivar), it is Spanish Mediterranean cuisine with a lot of French and, of course, Ibizan influence, with Asian touches. He has acquired his own style throughout his career (sa Capella, Clodenis, Amalur, Bacus, Otto Capuccini, sa Soca), a marvel! It is designed primarily for residents and, of course, for those who are nostalgic for Space. We organise sunset parties with universal lyrical music, arias that shine like stars in the light of the sunset. We have a terrace, a cocktail bar with a reproduction of the old Space booth, where everyone who signed in on the day the club closed six years ago can find their signature.

Is your friend Carl Cox also involved in this project?
Artistically, emotionally and probably physically. He’s been with me for over 20 years now. He’s a big boy who lives 24 hours a day with music. His connection with the audience is total and absolute. There is no DJ in history who has worked for 15 years always in the same club and Carl is a grateful person as well. It’s in our roots. It’s magic. 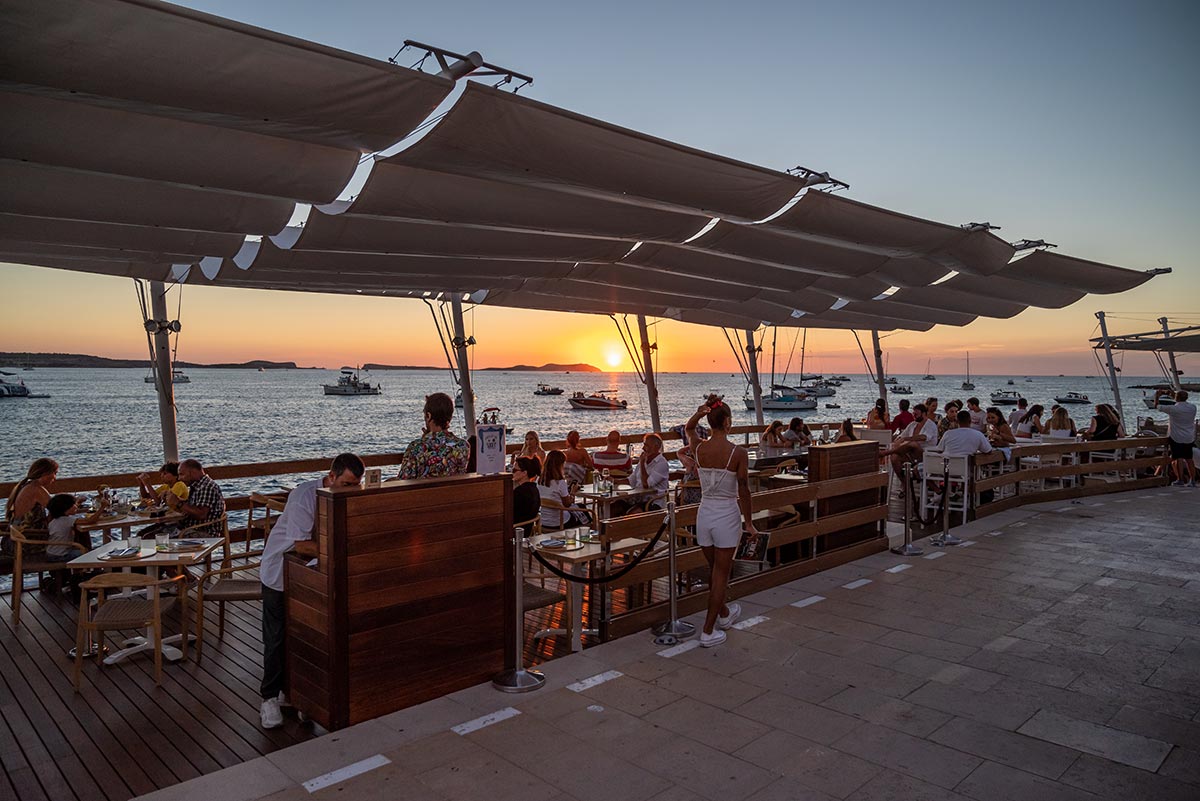 How do you see the entertainment scene at the moment?
I see girls dressed up in the morning in party clothes and that’s what they do all day long. The rhythms are altered. Covid has been a time wasted by the political class, a golden opportunity has been missed. The pandemic has provided the platform to solve 80% of the problems. By changing the by-laws, setting capacity limits, ensuring that each activity was linked to the appropriate licences and not to semi-obscure figures that are producing a business corporatism oriented towards hotels; the rest we don’t count on. We have gone back to the previous situation, but now with added stress. The airport, the traffic, the cruise ships disembarking 4,000 people with no means of transport, the water… What kind of luxury is this? Luxury is when the tourist enjoys it and the environment can absorb it.

Space is remembered by all as the most emblematic and funniest club of all those that have been on the island. What do you think was the differentiating element?
Space has gone down in history as the most recognised and awarded club in history. This is an award for Ibiza, for Ibizans… Music makes us all equal and free. There was an event at the Alexandra Palace in London in 2001 where we were awarded the prize for the best club in the world. In my speech I wanted to share it with all my colleagues, what a big mistake! Then there was a hatred to the death between us, fighting every day over everything. We all paid dearly for this disloyalty. They have destroyed the night with daytime parties, at the cost of disagreement and lack of unity, it is a real calamity. There is no need to name names. There is a status quo that has established the rules of the game.

What moments do you hold particularly dear and what would you change?
I would erase the difficult and sad moments when there has been an accident, which there have been, although we were the first discotheque with a nursing service. We have done the best we could. I would like to take this opportunity to apologise if I have upset the neighbours, because there was also a time when we worked outdoors, until the administration ordered us to close all the establishments. And now what happens is what happens now: parties all day long.
I have many good memories. On the day of the closure, the public and I cried together. I felt like I was the owner of a big theatre.

What do you think of the DJs’ rates nowadays?
Most of them are where they are not because of their artistic quality, but because of the promotion of them. There is a total dispersion and confusion. Avicii was paid €2,500 with us. The following year Usuahia took him and the figure was four zeros. Ibizan artists have no place because they are not promoted by foreign brands, which are the ones who move everything. It is only business. The land-use plans prevent large concentrations of people, but you can fit 10,000 people in and function every day, how do you understand this?

Let’s talk about your town, do you think this change of tourist model would be good for San Antonio?
There has not been a clear answer. Recently €3 million have arrived, but projects are needed. San Antonio needs the political parties to agree that they cannot turn their backs on the West End, it is part of the people.

What is your favourite place on the island?
It is a beach, Cala Salada.