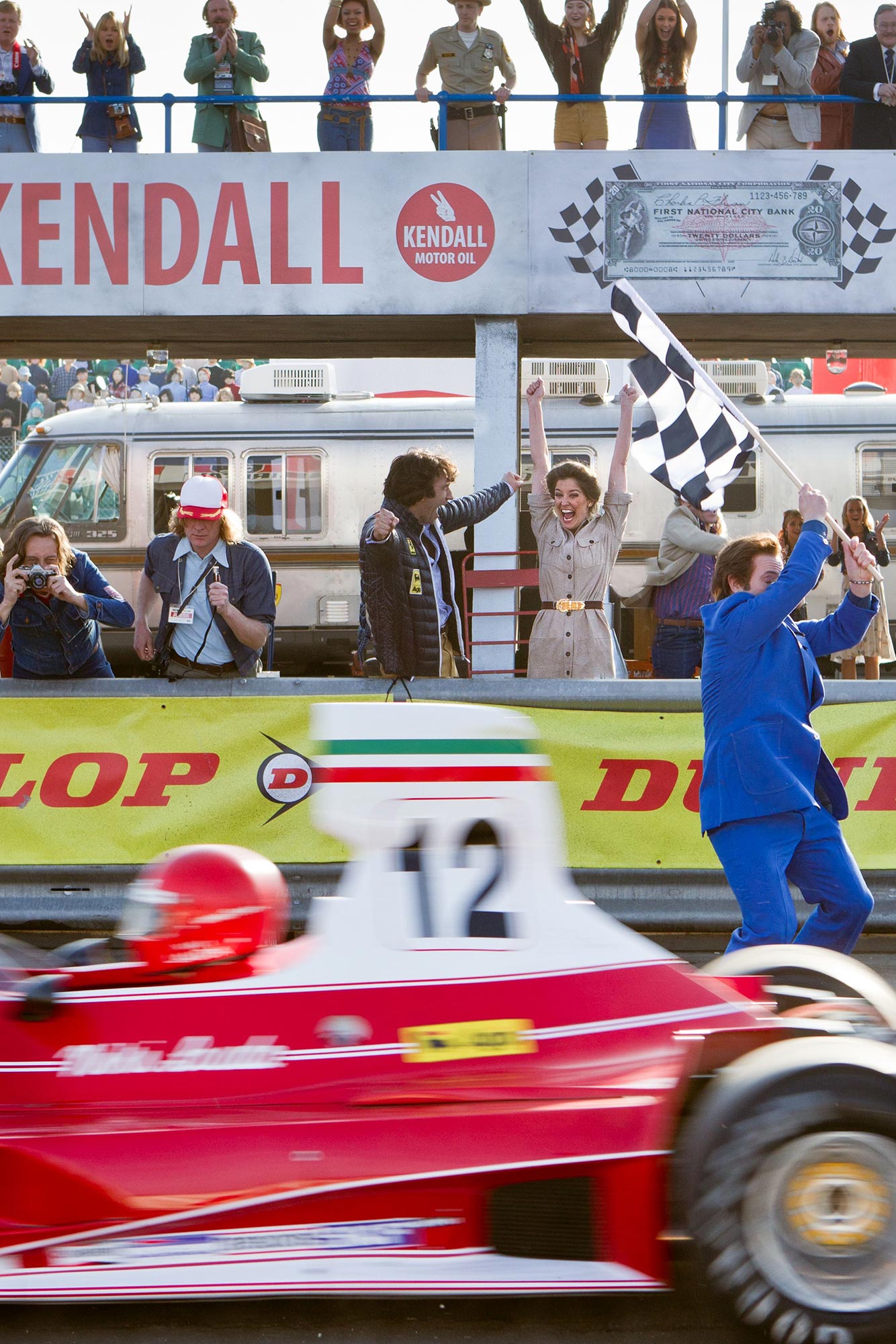 Rush – Flat out for Victory

In the film, which is not a documentary but rather a feature film, Daniel Brühl and Chris Hemsworth star as Niki Lauda and James Hunt, respectively. The film was presented at the ceremony for the Golden Globe Awards by Niki Lauda along with Chris Hemsworth. The motor racing epic was produced and directed by Ron Howard and written by Oscar winner Peter Morgan and it was nominated in two categories for an award. Although Rush had to accept defeat at the Golden Globe Awards in the face of overpowering competition, its two Globe nominations may, nevertheless, still be taken as a sure sign of its great success.

Shortly before leaving for Hollywood to the Golden Globe Awards, Niki Lauda took time out to talk with IBIZA STYLE publisher Jürgen Bushe.

When you heard about the film project for the first time, did you have any initial doubts about how it would turn out?

No, no, Peter Morgan is an Oscar winner who knows what he is doing and that’s why I wasn’t worried about it at all. Although he told me over and over again – and it’s only logical he did so – that this is a film that he was writing and that I would have no influence on the way it turned out. That was clear to me from the outset. Then along came Ron Howard, who’s world class, as director and also Daniel Brühl, who I met before filming began. So – I couldn’t complain.

So, you’re enthusiastic about the outcome.

Yes, I can only go by what people are saying and by the reaction to the film – and that’s been thoroughly positive.

But back then in 1976 you experienced what it was like in real life and, to some extent, it was surely different than it now appears in the movie.

Yes, of course, but everything in the storyline is basically right and that’s why I have no problem living with the film’s content. The reaction to it has been unbelievable. There haven’t been any negative reviews. On an emotional level, everyone’s fascinated by the film, the way the story between Hunt and me is created, the fight to the end – it’s been done really well.

You were two fundamentally different types; Hunt was more of a playboy and you were more you the tough, straightforward fighter…

…who only had one goal: to win. Of course, Hunt wanted to win too, but he also wanted to enjoy life to the full. At least, that’s what the film shows. Was it really like that?

No. To get to the heart of it: it wasn’t exactly like that, for example, I wasn’t as saintly as I was portrayed in the film. By and large, I just focused more on improving the cars’ technology to make them faster. Hunt simply had amazing talent. In the end, it all came down to who managed to nose ahead.

In those days – especially when compared to today – you took huge risks when driving. You almost paid for that with your life.

Seeing it re-enacted on film has practically enabled you to see for the first time what happened after the accident and how you and the doctors fought for your life. Nevertheless, you only skipped two races before – still wearing a bandage on your head and in great pain – you put your helmet on again. It must have been very hard, for your wife Marlene too, for you to start racing again so soon after the accident.

It’s all true, that’s how it was. I always knew that motor racing was dangerous. I didn’t have any illusions about that. I said; if I am able to drive again, then I’ll go back. And what was clear to me there was that the shorter the interval, the easier I’d find it to get over the whole thing.

It was important from a psychological point of view so that you didn’t suffer trauma?

Precisely, the longer you wait, the more negativity builds up. And that’s the reason I started driving again 42 days later.

When it comes to mindset nowadays, someone who is similar to you is Sebastian Vettel. He too has only one thing in mind: winning at any cost.

He’s a true professional who knows what it’s all about and does everything right.

As far as you’re concerned, is it still the same sport today that it was or is everything different?

Now it’s completely different to the way it was because of the potential dangers I faced. If you drove two inches too far, you were dead. Today that sort of thing does not happen anymore. But driving at the limit is the same challenge today as it was then even though they now get more help from computers, the gear change etc. But driving at the very limit is the same. We had to deal with the risk of dying prematurely and that’s something you don’t have to face today, thank God. Nonetheless, I don’t want to belittle Vettel’s performance in any way – quite the opposite. He knows what he’s doing, he drives faster than everyone else and that is why he’s been world champion four times in a row.

You have been appointed Chairman of the Supervisory Board of the Mercedes team. You pick top people from other teams for them (Mark Ellis and Giles Wood come from competitors Red Bull).

It’s perfectly normal in Formula 1 for engineers to move around. But the most important thing this year is the new engine, the turbocharger. Completely new vehicles that have been developed over the past three years. And not just the car – all the rules have changed. So there are brand new challenges this year and that’s why I’m hoping that with the quality of Mercedes’ motors and the car we should be able to get right out ahead. Having to start out from scratch again is always a good thing.

Many teams have been cursing about these changes, above all because they are unreasonable for the smaller teams. At the end of the day, do you welcome these changes?

They are cruel and too expensive but basically correct, because the decision was already taken five years ago.

So no-one can really complain. They’ve known they were coming for long enough?

They’ve known about them long enough, they decided everything together – I wasn’t there at that time – and that’s just way it is. And now Formula 1 is going to have to live with them for the next 18 years.

Michael Schumacher drove for the Mercedes team up until the end of the 2012 season. On top of that, he’s a good friend of yours. What do you have to say regarding his tragic accident?

I just can’t find a logical explanation for him having such a stroke of bad luck right now. Is it fate? I can’t understand it. I hope he can emerge from it alright again – unfortunately it doesn’t look like it so far – that’s my personal opinion anyhow. This is all very difficult and a tragic thing to happen because under normal circumstances there would have been a hundred other ways of him injuring himself, but getting hurt like this wasn’t one of them.

Looking back at the development of Formula 1 from the days when you were involved through Michael Schumacher’s time and up to Sebastian Vettel, at what time did drivers face the greatest challenge?

Without a doubt we did because the danger was much greater. For us, there was one fatal accident every year and we had to come to terms with all these things. There was considerably more pressure on us. And that’s why we were totally different types, completely different characters. We knew that it could be over at any moment​​. The farther you look back, the greater the burden was because there was less and less safety.

But the burden you bore was surely not only greater for you but also for the women in your lives. How was it for your wife, Marlene? She was often at the races and must have been trembling with fear?

No, she wasn’t there very often. After the Nürburgring accident – we only got married a short time before – she said that she didn’t want anything more to do with this madness. But she stood fully behind me and anyway she was never able to dictate whether I should or should not drive. She never did that. She completely turned her back on it and wanted nothing more to do with Formula 1. Something that was really very sensible, too.