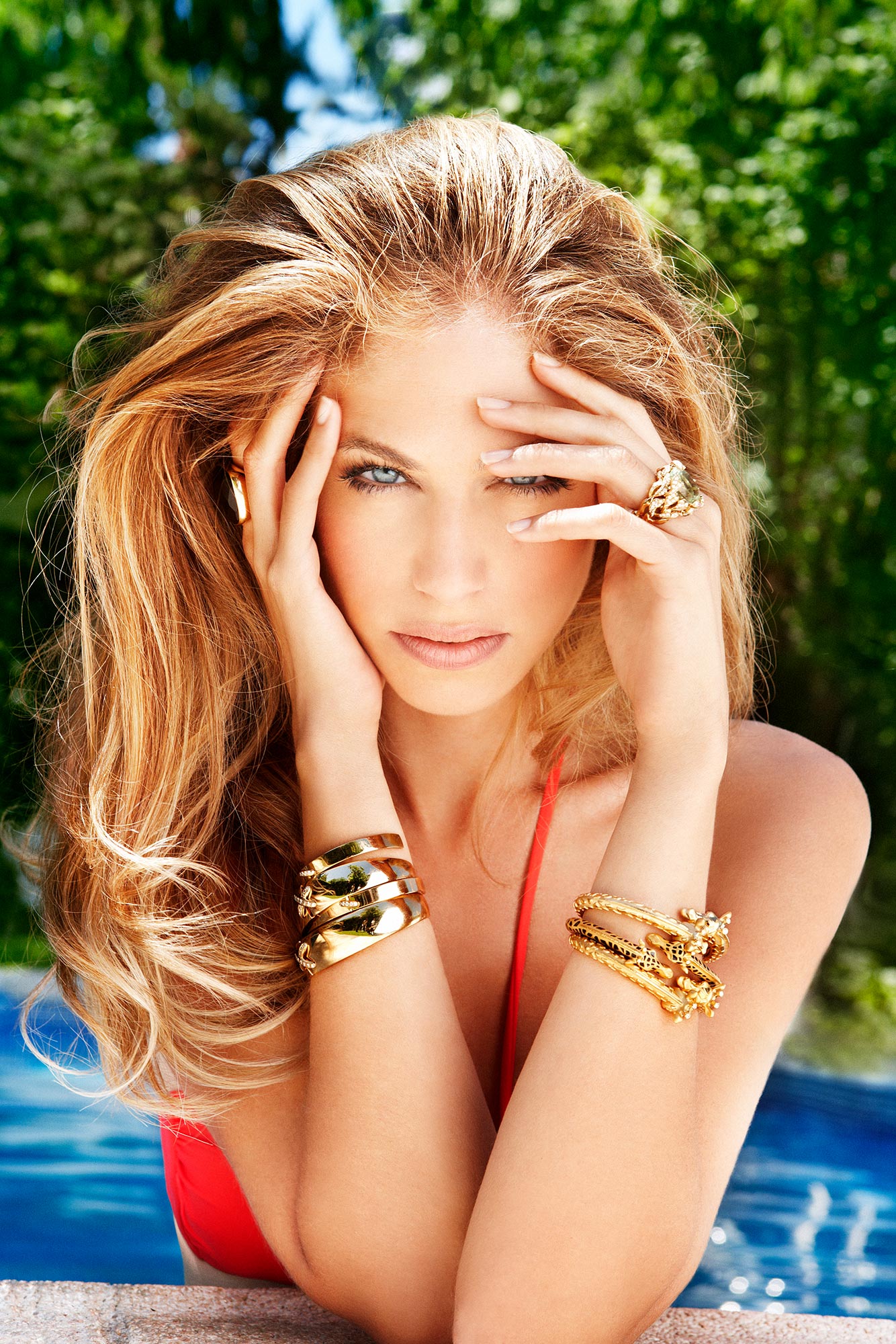 Martina Klein is such a German-sounding name that you wouldn’t immediately think we were talking about an internationally famous top model from South America. These days Martina doesn’t do quite so much modelling, but she is still pretty influential – primarily in the Spanish-speaking fashion world. Here ’the Klein’ is revered almost as a goddess. Born in 1976 in Buenos Aires, Martina has not allowed fame to go to her head and keeps her feet firmly on the ground, which is what earns her such popularity and respect.

She first came to attention in her early adverts for companies such as Kodak, Renault, Coca Cola, Mercedes Benz, Levi’s and Wella, in Europe and South America. Then in the 90s came her breakthrough into the top tier of catwalk stars. Her jet-set lifestyle took her from one fashion metropolis to the other, all over the globe. She modelled on the world’s most prestigious catwalks, in Milan, New York, London and Paris but, of course, was also the star of the Cibeles and Gaudí shows in Madrid and Barcelona. Some of her modelling jobs were for such famous designers as Toni Miró, Alexander McQueen, Cerruti, Lolita Lempicka, Comme des Garçons, Ferrety, Castelbajac, Dirk Bikkembergs, Angelo Tarlazzi, Balmain, Yuki Tori, etc.

She made the covers of magazines such as Vogue, Cosmopolitan, Elle, Marie Claire, Woman, GQ, Max, Telva and many others on numerous occasions.

She was also awarded titles such as ‘Model of the Year’ (Madrid Cibeles), ‘ Woman of the Year’ (GQ magazine) and ‘Most attractive woman’ (Hola). As well as the “Golden Antenna” for her contribution to Spanish fashion in the media.

We caught up with Martina in Madrid at an exclusive interview and fashion shoot for IBIZA & FORMENTERA STYLE, posing for famous fashion photographer Javier Plá.

You have travelled all over the world as a model. Which was your favourite location, which place really captured your heart?
Travelling for work is not like normal travelling, particularly if it’s to look for work – that makes things more complicated! However, although New York is the city par excellence, London has got all the personality and Paris is beautiful and the one which I found most enchanting, my life is here in Madrid, my heart in Barcelona and, of course, one little piece of it still stays in Buenos Aires.

Are you still in close contact with friends and loved ones there?
Yes, I have family and friends there. I’d say there’s nowhere I’d like to live forever, either here or there, but I don’t think I’ve found my ideal place to live forever but I do understand Buenos Aires, as a city.

So you’re still on the road, still searching. Where do you call home now?
Home is where my son is…

How old is he?
Four and a half. Basically, my home is here in Madrid, but also, to a degree, in Barcelona, where my parents live. I’m at home pretty much anywhere, to be honest.

Tell me a bit about your connection with the Pitiusas. Do you prefer Ibiza or Formentera?
Formentera! Formentera!

So do you sometimes go to Ibiza to party?
No, absolutely not! Ibiza can’t give me the kind of night out that I’m looking for. I’m a girl who prefers a more intimate, ‘flower power’ sort of ambience. I much prefer proper pop music that you can dance and sing along to – not all this boom boom boom. I can’t stand that.

So Formentera is for relaxation? Do you love the sea?
Formentera’s got the most amazing ocean. I’ve never seen anything to compare in all my travels. Also, there’s nowhere on the island that’s too far from anywhere else. But it’s also somewhere I very often come for work. The Germans, Swedes and Americans often bring us here for assignments – and to Mallorca or Menorca. Basically I’ve worked on all four of the Balearic Islands.

Which part of Formentera do you prefer, Mitjorn or Illetas?
That depends and on the number of people there are. I get angry promoting the island because I’d hate for it to fill up with even more people. I don’t want to encourage more visitors. I’m not the only one who thinks like this, it’s the same for the people who brought me here. We all like to think Formentera belongs to us – even when we know that’s not really true.

What do you consider to be the best time of year in Formentera?
June and September. But I do also come at Easter sometimes.

Do you sometimes cycle around the island?
Yes, sometimes. But it scares me a bit, especially if I have my son with me. I don’t like to take any risks then. I once had a bad experience with the bike on the island’s busiest road. I wouldn’t want to go through that again.

Do you have a favourite local dish or place to eat?
Yes I do – ensalada payesa, which is a typical Mallorcan salad. What I like most is to eat it sitting by sea, with a cool clarita to drink. And in the evenings we often meet up at Caminito’s restaurant.

Which do you prefer, glamour or simplicity?
Simplicity! I’m only glamorous on the catwalk.

You’re very pretty. How do you always manage to look so perfect?
Wow, thanks! You’ve made my day (laughs and thinks for a moment).

Do you diet or play a lot of sport?
No, not really. I drink lots and lots of water. I pay a certain amount of attention to what I eat. And I do a bit of Pilates, but not a huge amount. I’ve got my four-and-a-half-year-old son – and running around after him keeps me fit.

You also write newspaper articles and you’ve presented TV shows.
I haven’t studied journalism at all, but I write a weekly column for La Vanguardia and I also contribute to Marie Claire. And I’ve had a bit of experience as a TV presenter.

Do you prefer modelling or being a TV presenter or columnist?
I enjoy all. I like to do a bit of both. Photo sessions often take a very long time, so I use them to think about what I would like to write about next. But I couldn’t imagine just sitting in an office, writing all day. I enjoy doing a mixture of everything.

I would imagine the jobs you accept are the ones you like and enjoy?
Of course. I’m lucky enough to be able to decide which shoots to take and which to turn down.

Was the shoot you did with us different from your normal photo sessions?
Shoots vary enormously – it always depends so much on the photographer and stylist. I felt very comfortable here, we have known Natalia and Javier for a while. It’s the first time we have worked together with him and he’s an excellent photographer. It was very relaxed and fun.

Martina, thank you so much for allowing us this exclusive opportunity to spend such a great day with you. We’ve really enjoyed it and we hope to see you again soon in Formentera.