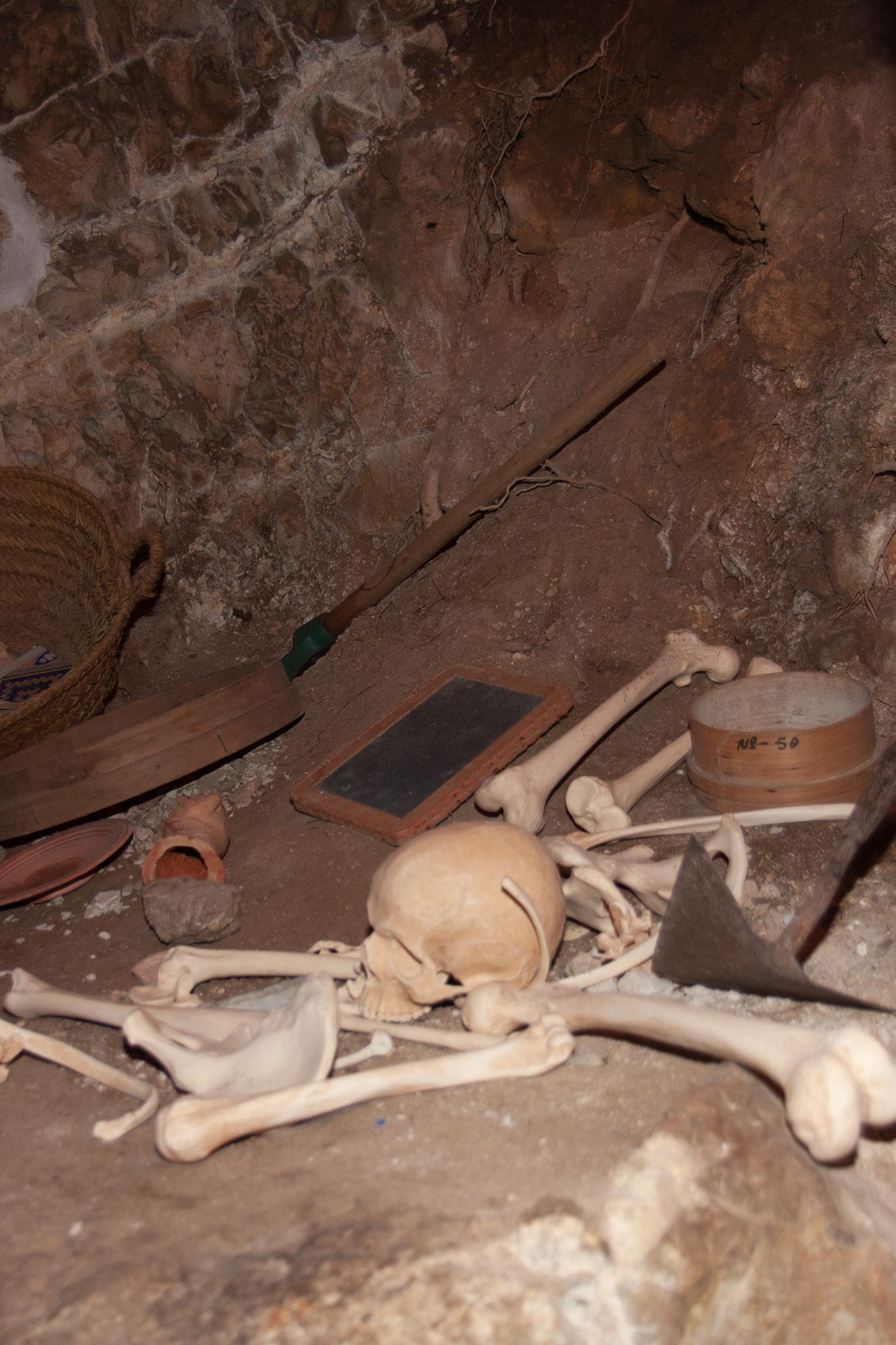 Some bones talk and reveal all sorts of things about people in the past for current and future generations. But if we want to hear their voices, we have to pay attention to the lessons that the stones and objects from daily life give us.

Thanks to the Archaeological Museum of Eivissa and Eivissa Town Council, at 7 o’clock in the evening on the second and last Sunday of every month from now , anyone who is interested in knowing more about our origins will be able to join in the guided, enacted tours carried out by members of two associations of volunteers; the Association of Friends of the aforementioned organisation and the dynamic group Iboshim, aimed at recreating the world of the Phoenicians. This fabulous visual and verbal spectacle does not use real actors, but rather employs people who are willing to demonstrate history in an educational and, at the same time, accessible way. They give classes in the open air within the magical, fenced and well-prepared venue of Puig des Molins burial ground. What’s more, they do so on a non-profit basis, purely out of their love of art, culture and traditions. Historian Carmen Mezquida is in charge of the narration – in Spanish – whose detailed explanations whet the curiosity of children and adults alike.

For a period of approximately one hour, the public will be able to attend a lifelike performance which transports us to the middle of the seventh century BC, the year 654 to be precise: the date when the city of Eivissa was founded. The event’s organizers speak in the actual languages of each era in order to achieve greater effect. They take pains to wear linen clothes, horsehair helmets, tin armour and realistic iron swords. Thus, without further ado, we are able to enter a time machine and go back to the Phoenician era. The process of burial and the funeral rites of the settlers of that time, the first colonisers of the Pitiüses Islands, are shown in detail. They disembark in sa Caleta and then settle in Dalt Vila, where they go on to excavate the sacred mountain of Puig des Molins in order to honour their dead. The priest, his slave, three mourners that do not stop weeping and, of course, the relatives of the deceased take part in the procession. Various soldiers then make their appearance indicating that the victim was himself a military man, without a doubt an important person. The corpse is cremated using a pyre made of pine wood and the bones are then broken down and pulverised as far as possible. Purifying water will be used to wash the remains before they are located in their last resting place beneath the ground or worked into the rock. If the family pays the sum which has been agreed, more tears will be shed and more prayers recited. Thus, it all comes down to his wealth.

The trousseau – whether abundant or austere – depends on the circumstances. The little bags of belongings pertaining to the poor will inevitably rot in the ossuary. Indeed, the material assets gathered by the deceased are there to accompany and protect him from evil spirits, as if they were a form of non-recoverable credit. In itself, death is considered to be a transition, a form of journey to another dimension and the person involved would set out on this long voyage with his possessions to be reborn further on. A warning is read out aimed at frightening off the tomb robbers, a curse that is cast upon them and their descendants.

Let’s advance 100 years at a stroke and we suddenly find ourselves in the company of the next inhabitants of the island, the Carthagineans, who do not come from western Asia but rather the North of Africa. They arrive in different waves, they leave Dalt Vila and invade the rest of Eivissa (the zone of Cala d’Hort, for example). Nonetheless, in spite of the demographic changes, Puig des Molins continues to be the preferred place to carry out funeral rites. However, the new occupants no longer choose cremation. They prefer another, more ecological method: burial in tombs. The modernised burial chambers reek of incense and ochre. Perhaps we find ourselves before a devotee of Tanit (or, to be precise, Tinit), the fertility goddess. In the sarcophagi carved out of blocks of sandstone, seashells, terracotta figurines (normally feminine), figures of dolphins (which bring luck to seafarers), rings, jewels and amulets of Bes, the fun loving God, are all deposited to give thanks for the mysterious lack of snakes and poisonous animals. In the hereditary pantheons jars of wine, ostrich eggs (a luxurious sign of rebirth), amphoras to keep food and lamps which serve as symbols of the light to lend clarity are also placed. Red paint is used to imitate blood and therefore life. The watchmen and those in attendance will be purified with holy water .

And there is still more to come. The educational enactment advances through time up until the Romans, the great conquerors. The nocturnal entourage will make use of the tombs that already exist and adapt them to their needs. The ancient Italians combine both systems: cremation and burial. They increase the amount of decoration. There are perfumes, balms, glassware and wax masks. Two coins are added for the boatman Charon who will enable the deceased to pass over to the other life. In parallel, embalming is used: the pouring of liquids onto the corpse via wine or holy water. The funeral chants are pronounced in Latin, the classical language par excellence.

The staging approaches its conclusion. It is time to examine the phenomenon of tomb raiding which intensified from 1903 when excavations began in Puig des Molins. It was the deed of the archaeologists’ helpers, the very same workers, who robbed the most valuable pieces and not always the most emblematic ones. Certain well-known individuals, such as the writer Santiago Rusiñol, even proceeded to build up their valuable private collections by taking advantage of these unscrupulous gravediggers. Such lamentable actions also form part of the sad history of the necropolis: one of the most fascinating archaeological sites in the Mediterranean and one which houses between 3.000 and 3.500 graves in the space of its almost 6 hectares of surface area. It’s an invaluable treasure trove that needs to be carefully conserved nowadays.

Trailer Cartago vs Roma – Factoría Difácil from Factoría Difácil on Vimeo.
At 8 o’clock in the evening on the second and last Sunday of every month
Price: children 5 €, adults 10 €
Booking necessary: Tel. 971 301 771