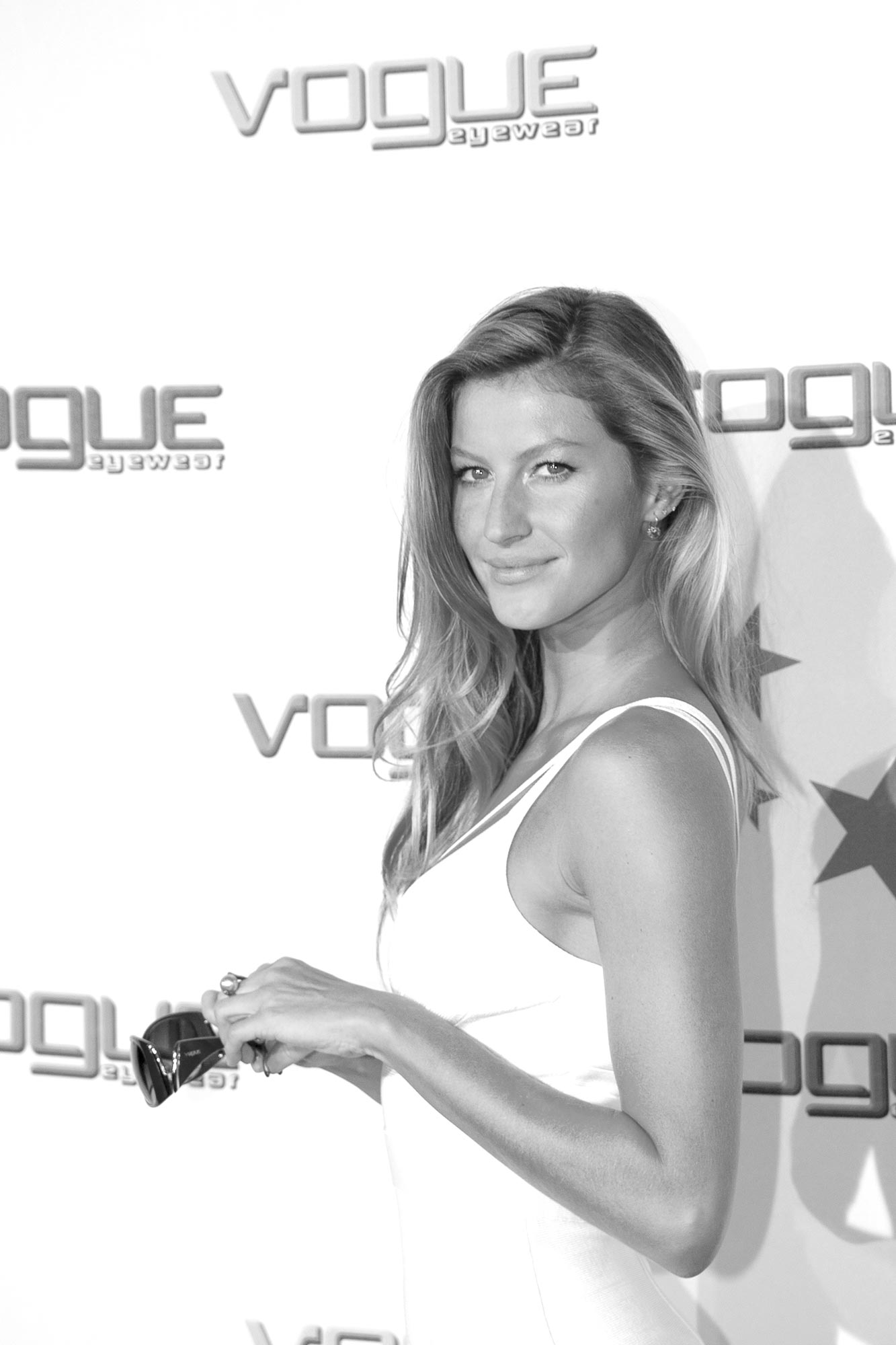 Without doubt, she possesses a beauty that is both extraordinary and classic. Gisele Bündchen came to Eivissa on a mission: she was here to present her collection of Vogue sunglasses. In the fabulous setting of the Atzaro, an exclusive banquet was held followed by a sophisticated party with free bar. Performing live on stage were the adorable Atomic Kitten with disco sounds for the rest of the evening being laid on by the modernistic and iconoclastic Queens of Noize.

Anyone thinking this was their chance to meet Gisele Bündchen live and in the flesh here in Ibiza, and to get an idea at first hand of whether this top model really did conform to their (mainly male) fantasies, was in for a disappointment. There were too many representatives of the media on hand, all desperate to home in on one rash utterance from the star model: “I’ll parade naked through the streets of Manhattan if Tom loses the game against the New York Giants.” But Tom (surname Brady, American football player and partner of the stunning Brazilian with German forebears) did lose and Gisele had no choice but to deny that she had ever made such a commitment in January. And to continue to deny it here in Ibiza this March. Tom could have saved her all the embarrassment by ensuring that wretched Superbowl had a different outcome! Here on the Island, we have a saying: “Dimes y diretes.”

“Gisele, do you intend to wear a pair of the new Vogue sunglasses that you helped design when you’re parading through Manhattan?” asked a reporter from IBIZA & FORMENTERA STYLE in the midst of a scrum of cameramen, journalists and – horror of horrors – bodyguards. “Obviously. I’ve got plenty of them and I frequently go jogging in Manhattan,” replied Gisele demurely in her white dress designed by Frenchman Hervé Leger in XS size and purchased from an exquisite boutique in the centre of Vila.

“Actually, what we meant by that is, do you intend to keep your promise?” But when pressed on this point, the model furrowed her brow. In a trice, the look of innocence on Gisele Bündchen’s face was transformed. Her response was razor-sharp: “That’s a lie. A lie. A lie, I tell you. It’s absurd. I have never even posed in the nude. Why should I go in for such a dare?”

With these words, she succeeded in shattering the dreams of everyone who had come to pay their respects on 27th March at the Agroturismo Atzaro during the presentation of her sunglasses collection, part of the ‘Play everyday’ advertising campaign with Gisele as the public face of the range and Mario Testino as photographer. But they also shattered the dreams and flights of malicious fancy harboured by all those who had been affected by the defeat of the New England Patriots for whom Tom Brady plays at quarter back.

Things got even more embarrassing when a well-known figure from the gay scene put in an appearance. Instead of asking any questions of the top model, he smarmed all over her: “You are simply gorgeous, Gisele.” He was talking Italian and took her gently by the hand. “I don’t know what language I’m talking any more – English, Spanish, Italian or Portuguese,” said the subject of this flattery somewhat numbly, having only just regained her composure after a tricky situation some minutes earlier. She had been interrogated in Spanish about the unambiguous body language of the Vogue magazine cover in which Lebron James, a player from the NBA league, was seen clasping the fragile beauty in a King Kong embrace.

“At least he is holding on to me like a strong man and not like a queer,” she spat out in Spanish, apparently in an attempt to get everyone present laughing along with her. “No, no. What have I just said?” she stuttered hastily. “That’s not what I meant. I was looking for the English word ‘weakling’,” she added by way of apology and with obvious deep embarrassment. “That often happens when I’m trying to speak to reporters in their own language,” she continued, trying to extricate herself from the posse of journalists who were besieging her.

She then found herself surrounded by the next horde of cameras and microphones, where the topic now turned to her beau. “Gisele, have you brought Tom with you? We were told you were planning a romantic weekend together in Ibiza.” “It’s quite romantic enough for me to be here alone with you all, wouldn’t you say. You lot are the romantics after all,” she replied in mischievous tones and with an innocent demeanour.

It was clear from this that she was unwilling to say anything meaningful about her new companion and that she wanted to steer the conversation towards a more manageable and less controversial topic: “What does fashion mean to you, Gisele?” “It’s the way we feel about life. Fashion takes on meaning when you dress the way you want, when you discover your own style. That’s not to say that it always has to stay the same,” she continued, visibly relieved that her interrogation was coming to an end. One other thing the top model had to say: she was “feeling the cold”. This was her seventh visit to the Island but the first time she had come here outside summer. She had no idea that it could be quite this cool, not even in the evenings.

The London-based duet, Queens of Noize (Mairead Nash and Tabitha DeMit), seemed to cope with the occasion far better – no complaints about the cold and no personality cult either. They had been entrusted with the job of providing the musical wall of sound for the party beforehand, playing a selection of revival anthems, mainly from the 80s.

The same could be said of Atomic Kitten. Following a short break “for purposes of motherhood” and “to embark on solo projects”, they have now returned to the stage. And they have also released a single in aid of six local charities in the north-west of England. The title is ‘Anyone who had a heart’. After telling everyone how utterly “chuffed” they were to be in Ibiza, it didn’t take much persuading for them to break into song: when IBIZA & FORMENTERA STYLE asked Liz McClarnon, Natasha Hamilton and Jenny Frost to perform a few lines of their number one hit ‘Whole again’, they struck up in unison: “Looking back on when we first met/ I can not escape and I can not forget/ Baby, you are the one/ You still turn me on/ You can make me whole again.”