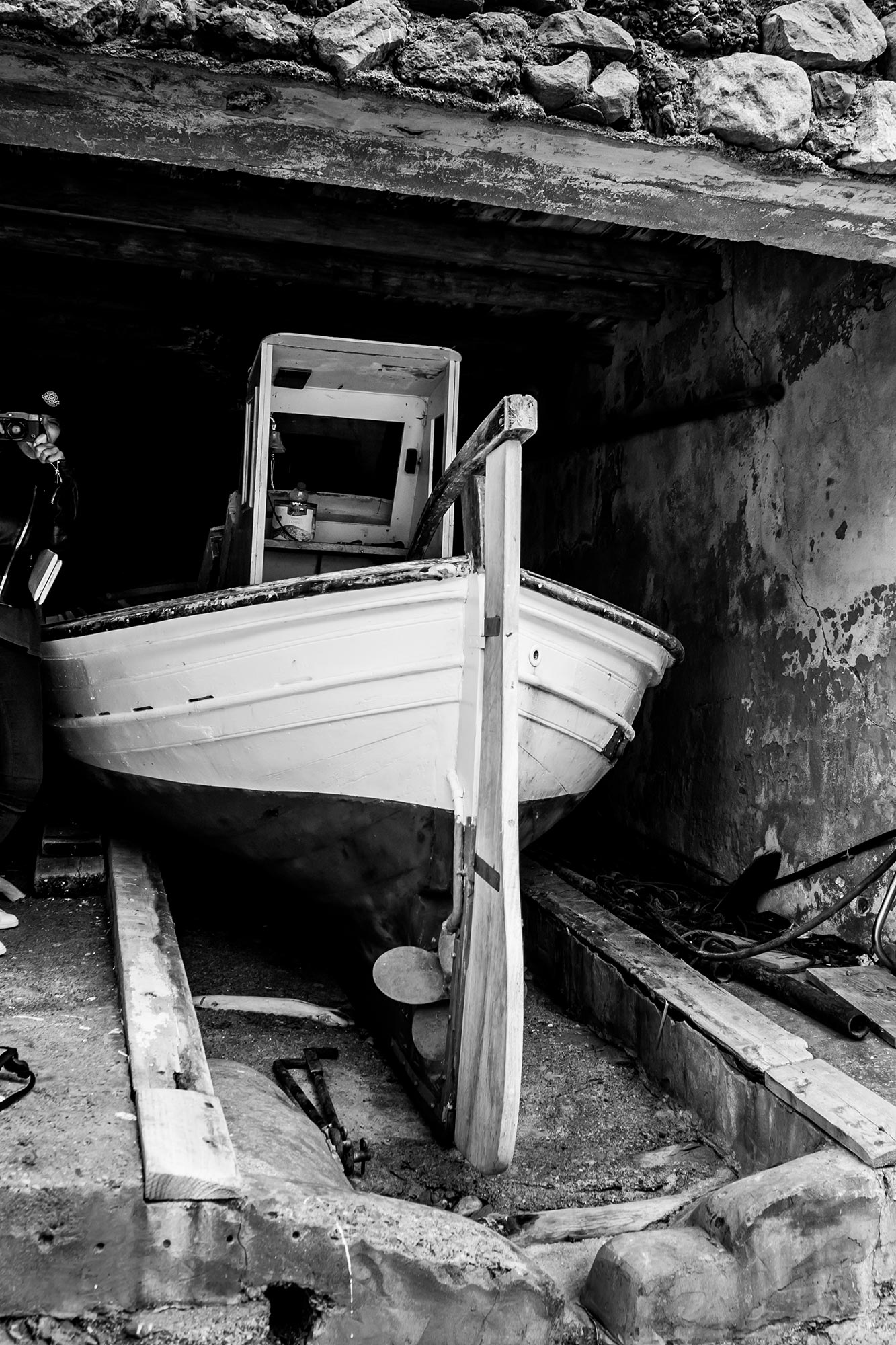 Petit – A boat built on an island that no longer exists

Even at the age of 53, ‚Petit’ looks as immaculate as she did on her first day. Ensconced in her fisherman’s hut on the beautiful beach of Benirràs, ready to set sail, this llaut was born in an Ibiza that we can barely imagine today. An Ibiza without tourists, without hotels or scarcely any buildings, a virgin land of farmers who, on occasions, had a hard time finding something to put on their plates. And that’s because people really went hungry in Ibiza in those days.

Joan Escandell was born and brought up in Puerto San Miguel, where his family possessed a lot of land including pine forests and areas under cultivation. At that time— we are talking about the beginning of the 1960s— the land was only worth what could be grown on it.

“I’ve always loved boats”, says Joan. He tells us how, ever since he was a boy, he used to run down to the beach where he would watch and occasionally accompany the fishermen of the area that used to go out in their tiny recreational boats in search of a few morsels to eat. If there was anything left over, they would give it away or exchange it for potatoes with relatives and neighbours. Joan felt fascinated by the sense of freedom of life on the sea.

That’s why, when he was barely 15 years old, he very solemnly told his father that he wanted a boat. The head of the family told him that he thought it was a good idea, although he didn’t believe he would go ahead and do it until he found his son with an axe in his hand cutting down pine trees. “Joanet, do you really want a boat? Where on earth are you going to get the money?” With seven children to feed, his father wasn’t able to give him a single cent to help him, even though he gave him the go-ahead to cut down all the pine trees he wanted. Little did he imagine then the iron will of that young man who managed to make his dream come true after two years of hard work.

Joan managed to make his way to Ibiza Town, where he was introduced to Juan, the master carpenter of the boat builder, a so called “Maestro de hacha” who was there at that time. The craftsman motivated him to choose the kind of boat he liked most from among the ones that were there, telling him: “You’ve got an eye for it; that one’s got a really nice prow”. So he gave him the templates for the pieces of wood that would form the boat’s structure. Joan put them together before setting out on his way back home.

From then on, his only aim was to build his boat. At the age of 16, he found a job building a laundry room in a farmer’s house, for which he was paid six pesetas an hour: “It was a fortune in those days!” With his savings he was able to get started since he already had the pine timber despite the fact he was still unable to move it. You have to bear in mind that, in those days in Puerto San Miguel, there were no saws or tools of any kind, there wasn’t even electricity and you had to take the wood down to Ibiza on a cart drawn by mule so that it could be shaped by using fire to bend it, before transporting it back again, all the while taking care to not overload the wagon because the bumpy roads could cause its cargo to tip over. There weren’t even any roads…

Joan also spent some time working in the port in Ibiza, unloading the cement that arrived in the ships’ holds; for him it was just a way of being able to purchase the box of nails he needed to keep going.

Juan, the master carpenter, rode by bicycle every week from Ibiza to San Miguel to supervise the work. We spoke to Juan’s son – also called Juan – who, like his father and his uncles, is also a “Maestro de hacha”: “My children didn’t want to carry on in the trade anymore”. Now that Juan is on the verge of retiring, Joan regrets that even though there are still some young people in the trade, when it happens it will mean the loss of one of the best, an artist and a man with “almost magical” intuition. The fact, as both of them point out, is that no two pieces of wood on a boat are the same.

So it was that, over the course of two years, using his invaluable template Joan set about cutting trees, collecting the wood he needed and working whenever possible to cover the costs of the llaut. The ‚Petit’ was exclusively hand built at the foot of a pine tree 800m from the sea. When it was finished, half of the village came out to help him, dragging it on tree trunks to the water’s edge. Even though he now also owns a bigger one to supply his dinery, Restaurant 2000, the ‚Petit’ still goes out to work, making an impressive sight as it reaches Benirràs beach laden with fresh fish. Plenty of people follow it, taking the chance to choose the fish they want to eat that day. Joan’s eyes light up when he talks about this boat that he keeps in perfect condition, a boat built on an island that no longer exists: “It’s hard to believe how much Ibiza has changed in 50 years”.