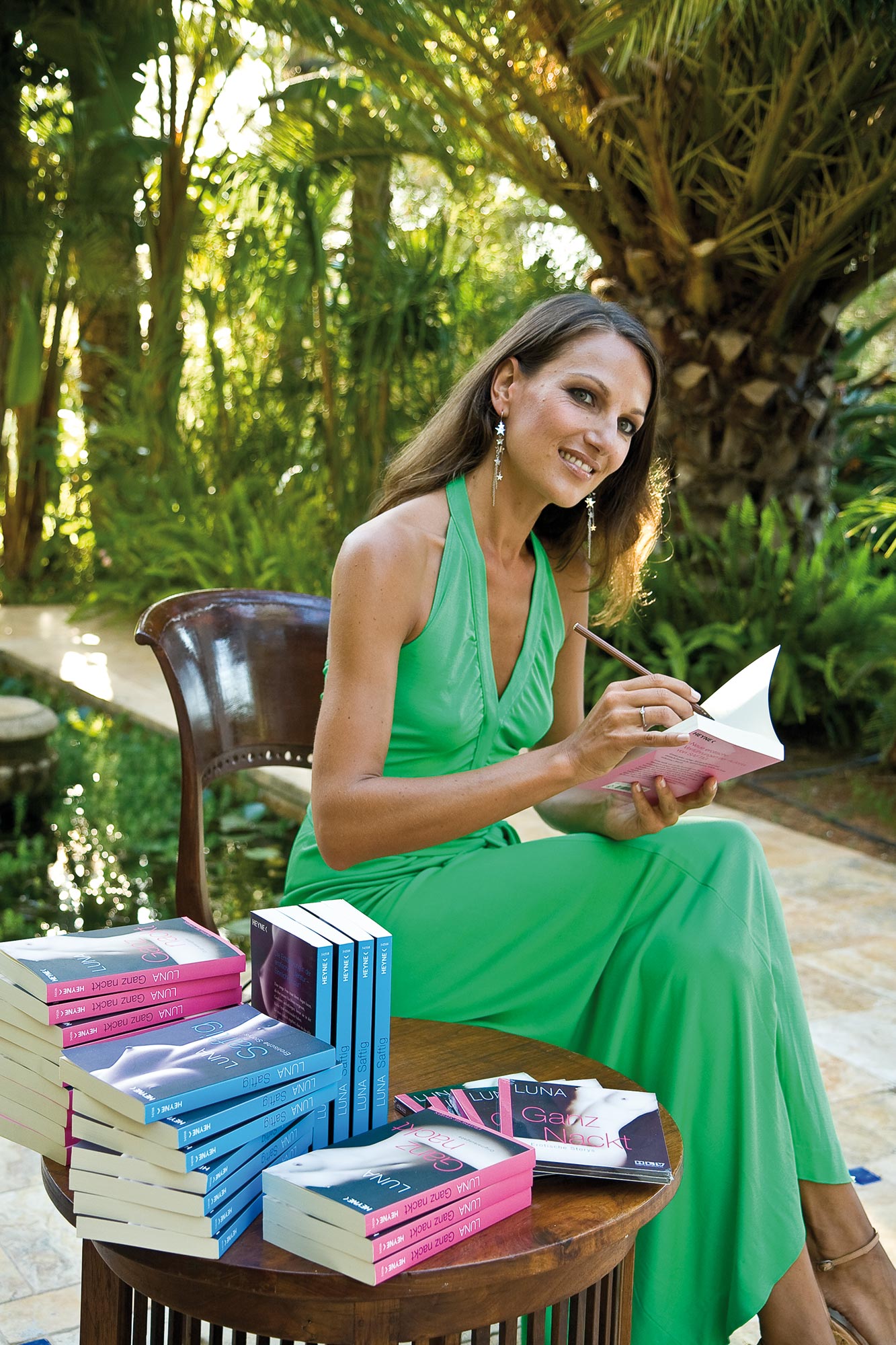 Sex is the most normal thing in the world

After three rings, a young woman answers the phone – “No, no problem, see you at five…” – then with an appealing laugh she says goodbye. No hint of a wanton undertone, no licentious murmurings. The woman could very well have whispered a suggestive “OK baby, see you later!” and it would have come as no surprise if she had, in light of her stories ‘Lieblingsblau I’ and ‘Lieblingsblau II’ (Intimate Blue I and II). Set on Las Salinas beach, the main character, luxuriating in the waves, ‘was focused intently on the sensations between her thighs, because each time she moved she felt as though a soft, wet tongue was licking the hidden folds of her sex.’ The stories could easily give the impression that the woman behind them is a fully-fledged femme fatale, wearing a low cut silk negligee, cigarette holder in her hand. On the driveway into her… (no – not sinfully expensive luxury villa)… stylish farmhouse, the interviewer feels a little nervous; after all, it’s not every day that one talks openly about this sort of thing over afternoon tea.

With a friendly smile, Luna von Eisenhart Rothe trudges across the lawn and two minutes later her guest is settled in a comfy armchair, holding a cup of mint tea on her lap, reassured to be sitting opposite such a natural-looking, discretely made-up woman in jeans, with honest green eyes. Born in the Allgäu region of Bavaria, Luna first came to Ibiza at the age of 20, as a package tourist. Drawn to the openness of the people (and to the island’s night life at the time), she forgot about her return flight and stayed. She made a living as a dancer in the ‘Ku’ and ‘Amnesia’ clubs. She returned to Germany for a few years but has been living on the island for the past three. A short while ago she brought out her second volume of erotic stories entitled `Ganz nackt´ (Stripped Bare).

Does it upset her friends that she recommends hidden corners of the island as ideal spots for a shag? Do they not dislike the fact that Ibiza has become associated with sex?

“No, most of them think it’s pretty good”, she says firmly. “I’ve noticed that some of them are wide-eyed when they read the stories but then wonder: ‘why hasn’t that ever happened to me?’ Then there are others who discover for the first time that sex can be fun. Don’t forget too that my books are, first and foremost, about sex.

But if you read the story ‘Lieblingsblau I’ carefully, you’ll see that there is more to it than that. In some ways, you could say that what I have written is a love letter to Ibiza.” When asked at what point she discovered her passion for writing, Luna says that as a child she wanted to become a writer and even now she still uses the Duden dictionary of German synonyms and antonyms, given to her by her aunt on her 8th or 9th birthday. After reading yet another badly written erotic novel she decided to start writing herself. She takes a cigarette out of the packet, lights it, draws on it briefly then says as she exhales the smoke: “Actually, every now and again I enjoy reading erotic fiction, but there aren’t many I like because I hate it when completely overblown images are used, like ‘the prince riding in on his white horse’, or when the writer does not talk about things openly and instead uses terms like ‘dew-covered petals’. At the end of the day we’re talking about parts of our body. It’s fine to call them by their names. So I thought to myself you know you always wanted to write, why don’t you just write your own stories,” she laughs.

She made a conscious choice to write in a style that was true to life, rather than highbrow, because she wasn’t writing for her own personal fulfilment but rather to say to her readers: “Hey guys, sex is the most normal thing in the world … and it’s fantastic!”