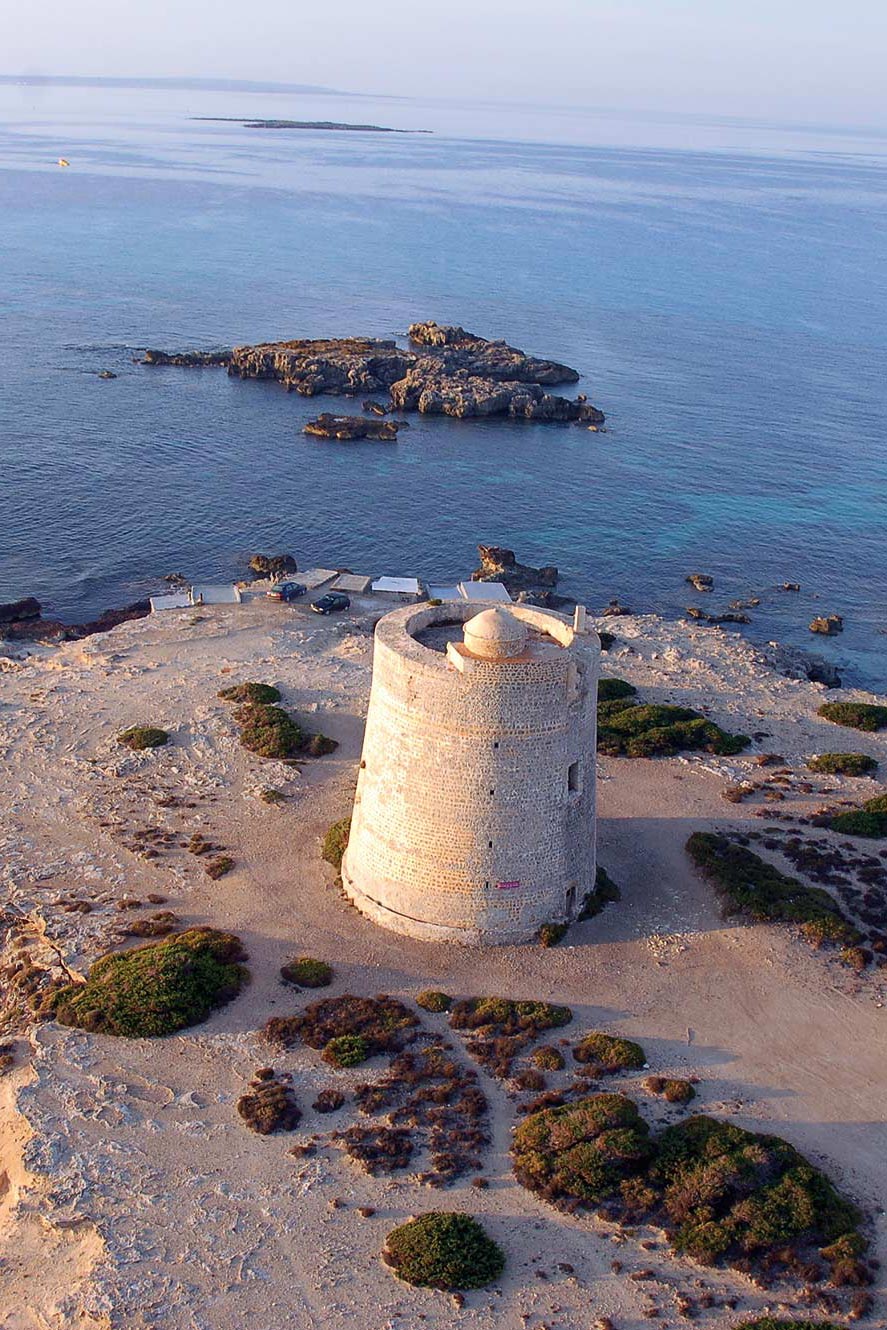 Amongst the most thrilling and important remnants of the Pitiusas’ past are the Renaissance town walls in Dalt Vila and the watch towers and defences along the coast of Ibiza. Every visitor to the Island is immediately struck by the impressive town fortifications which have been declared a World Heritage Site. But the traveller will discover the watch towers later – along a stretch of the coast which can easily be accessed by car and which makes for a brilliant day out. The towers date back to a time when pirates were not merely a romantic notion, but represented a real threat. Today, they offer fantastic views over the magnificent countryside, as in order to gain the advantage, these towers needed to be built on raised ground, such as mountain ridges, headlands, cliffs and on small islands off the coast.

In 1235, after more than 300 years of Arab rule, Ibiza and Formentera were recaptured by the Catalans during the ‘Reconquista’. However, this did not stop the Island’s former, exiled rulers from staging sinister visits. They made good use of their intimate knowledge of the archipelago as well as the element of surprise for their unexpected forays. They landed in quiet coves, attacked the scattered surrounding hamlets and stole everything that was not nailed down; goods, animals and above all women and children whom they used to extort ransom.

It was for this reason that the watch towers were built, enabling the sentries to raise the alarm at the first sight of an enemy sail on the horizon. Then an acoustic warning was given with a shell horn. They also used fires which could be seen for miles around, heavily smoking ones using green branches during the day and brightly burning ones made from dry wood at night. This gave those who heard or saw the warning several options: inhabitants who lived in outlying houses fled into the fortifications which at the time were also to be found in rural settlements. And anyone who found themselves near a church sought refuge there, as at that time all the churches had been fortified.

The warning signal was passed along the chain of towers. One watch tower alerted another until the warning reached the town, so that the armed corsair ships could be sent out with royal assent on the hunt for the pirates. There is a monument to these heroic defenders which can still be seen today on the harbour front in Ibiza. It is the only monument to corsairs anywhere in the world.

The watch towers were constructed between the 16th and 18th centuries by royal stonemasons. Invariably round in shape, their walls are 2.5 metres thick, they are between eight and nine metres in height, consist of two storeys, a spiral staircase curling around the inner wall and an exterior platform complete with arrow slits. The door is set at a dizzy-making height. It could only be accessed with a ladder which the defenders could withdraw once they were inside.

Anyone wanting to visit the towers today is advised to start their trip at the aforementioned corsair monument in Ibiza’s harbour and then head off to the south of the Island. The towers are easy to find as they are clearly marked on every tourist map. The following is a well-trodden tour route:

The final four towers mentioned can be found on the Islands of Espalmador and Formentera. You can see them if you take a trip to the smaller Pitiusas: leave the Freos Straights behind you and follow the stretch of road through the Salinas nature reserve, a divine coastal region with small islands and lighthouses and the purest, clearest water of the Mediterranean.

In the last hundred years, several of the watch towers have been inhabited once again, usually by eccentrics who find that they can fulfil their dream of life as a recluse. Many years ago, a fisherman lived in the ‘Torre de ses Portes’. He took his boat out to sea every day, and later on, exchanged his catch for vegetables, sugar, salt, coffee and other every-day items in the Bar de la Canal.

The ‘Torre d’en Rovira’ was also occupied in the 1930s. In the 1960s, the tower of Cap des Jueu, which stands opposite the mythical Island of Vedrà, and was described as the ‘Pirate Tower’ by the novelist Blasco Ibáñez in his book ‘Los muertos mandan’ (‘The Dead Command’), was inhabited by a strange woman: she always wore trousers and boots and appeared only rarely in Pueblo de Cubells. When she did she was always armed with an enormous basket for provisions. She was a writer and a painter, and soon the wildest stories grew up around her which were embellished as circumstances dictated.

The truth is that these towers were given a second life by these hippies who used them to realise their Robinson Crusoe fantasies. Today, the towers bear unusual witness to the past; they cast a magic legendary spell over the Island, and together with the Renaissance town walls in Ibiza Town, represent a cultural heritage of inestimable value.