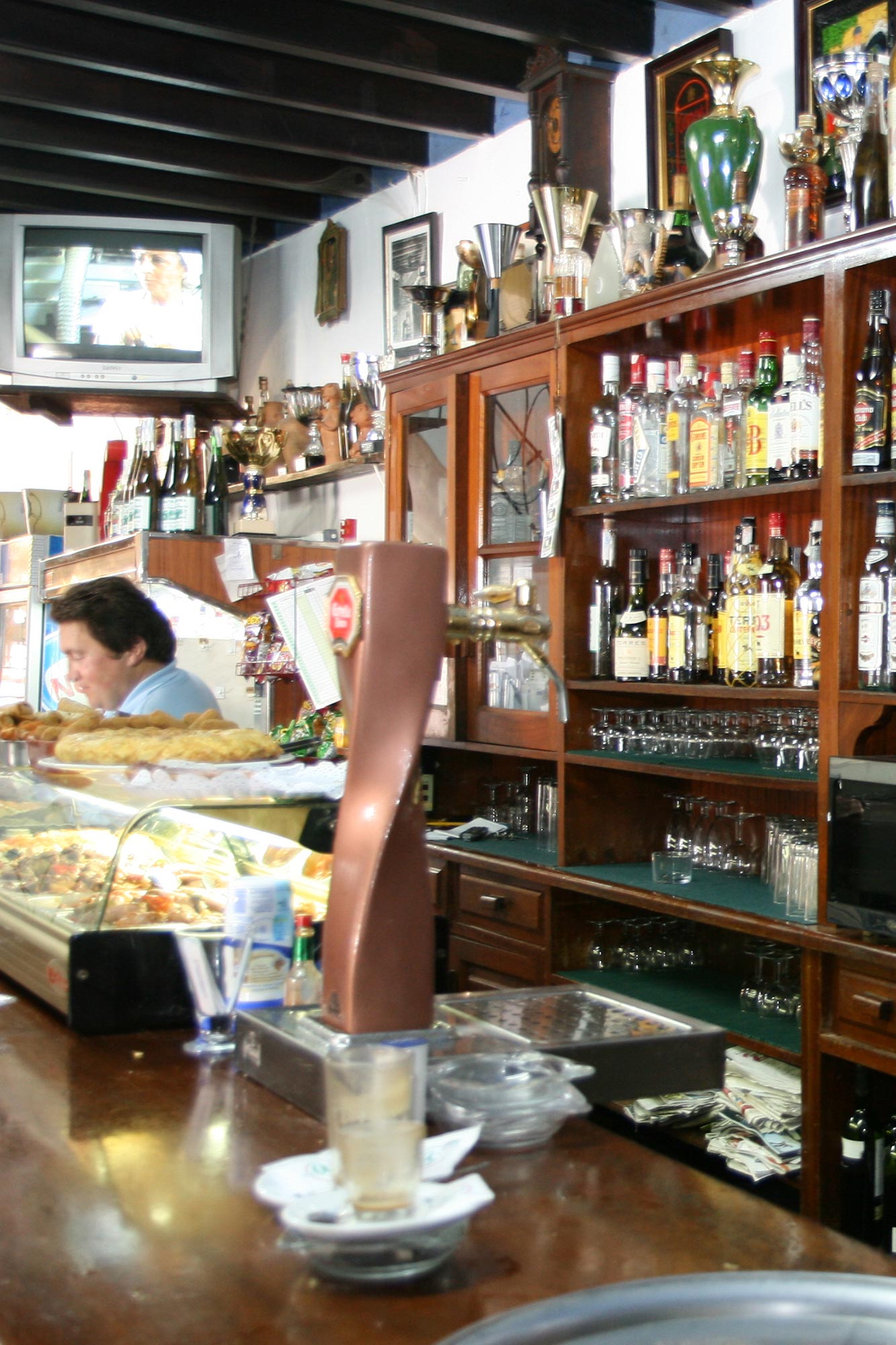 Right next to the church of Sant Carles de Peralta stands one of the most famous and also best loved establishments on the Island: We are talking, of course, about the Bar Anita, otherwise known as Ca n’Anneta. It has become an absolute ‘must’ for all bohemian types and intellectuals in rural Ibiza, though here we must also give at least a passing mention to the equally legendary Can Costa in Santa Gertrudis de Fruitera and Can Berri in Sant Agustí d’es Vedrà. For many people, this old bar and restaurant formerly owned by Ana Marí Torres, is one of the few remnants of the hippy era, probably even the last, although its current owners would probably not be too thrilled by this description. They do not want to be pigeonholed. Exaggeration or realism? We would rather you made the decision.

This place still invites you to spend a relaxing afternoon over coffee or a glass of Hierbas Ibicencas made to the house recipe. Bit by bit, the spirit of the traditional Eivissa, of which traces still remain, is merging with the modern, and even an element of glamour has crept in to ensure its survival, its future development and its ability to fall in line with the notion of equal opportunities.

Today, the wood-burning stove is no longer in use but nonetheless adds to the rustic charm. This historic tavern still manages to surprise us despite the obvious changes that have taken place in its immediate surroundings. This is precisely what gives it its particular allure.

Bottles here and there, pictures in a range of artistic styles, various drinking vessels, a billiard table, the much-loved large-screen TV, sports trophies and, above all, glass bottles full of the bar’s own typically sweet, spicy drink all go towards creating an unforgettable and enduring atmosphere. The ancient wooden post box and telephone kiosk are two unforgettable features that already find themselves in the collective memories of regular customers, tourists and residents – particularly the Germans. You can breathe in history and fresh air at the same time. Here, they have had to adapt to the circumstances. The Anita must not be allowed to die – no, nobody could possibly want that! It is more than just a bar; it represents a sort of philosophy of life.

Ca n’Anneta first opened at the end of the 19th century and is a genuine architectural treasure and social institution, not only in Sant Carles but in the whole of the Pitiusas. It is located in a typical country house that used to belong to Josep Noguera, also known as ‘Pep Benet’. His son Antoni did not inherit it, as he emigrated to America like so many of this fellow countrymen. After that, the bar, which was originally called Can Pep Benet y Sa Botiga, was taken over by Ana Marí Torres who later left it to her son, the grandson of its founder, Néstor Noguera Marí. The old delicatessen became one of the most popular meeting places for its clientele of regulars and the perfect place for a relaxed, leisurely chat. Over the years, everyone and everything have been looked after by a single family. This complete loyalty to one village and its inhabitants just has to be recognised.

It is for precisely this reason that in 2005, Ana (Anita) Marí Torres received the Ramon Llull prize from the Government of the Balearics in recognition of her hard work and expertise in the production of hierbas, a herbal liqueur brewed according to an ancient recipe with a surprisingly penetrating sweet taste. This aniseed liqueur is produced by adding thyme, fennel and other typical woodland and meadow herbs grown in Ibiza. It is not exported and is consumed only here on the Island. But please exercise moderation when enjoying it. Like absinthe, this delicious liqueur goes to your head surprisingly fast, so you really need to be careful that you don’t get seriously intoxicated. Unfortunately, the successful owner of this magical recipe shies away from interviews. So the secret recipe needs to be charmed from her with lots of diplomacy and cunning. Otherwise it will never ever be revealed.

In addition to hierbas, the waiters here also serve other excellent aperitifs. For instance Mesclat, a mixture of liquorice, dark vermouth (red or black), a few drops of gin and then soda water to taste – to all intents and purposes a purely herbal Island cocktail hour for aficionados and bon vivants. However, I wasn’t served the highly desirable ‘Swiss’ a mixture of absinthe, lemon syrup and water. What a shame!

Well-known faces from the world of cinema and the arts plus members of the sporting elite have honoured the Anita with a visit. Celebrities such as actors Terry Thomas and Fernando Rey, painter Erwin Bechtold, singer Nina Hagen and famous racing drivers Keke Rosberg and Niki Lauda are still fondly remembered. Sadly some of them have since passed away. Nowadays, they all turn up here – stars and unknowns, rich and poor – each and every one welcomed with open arms regardless of who they are. 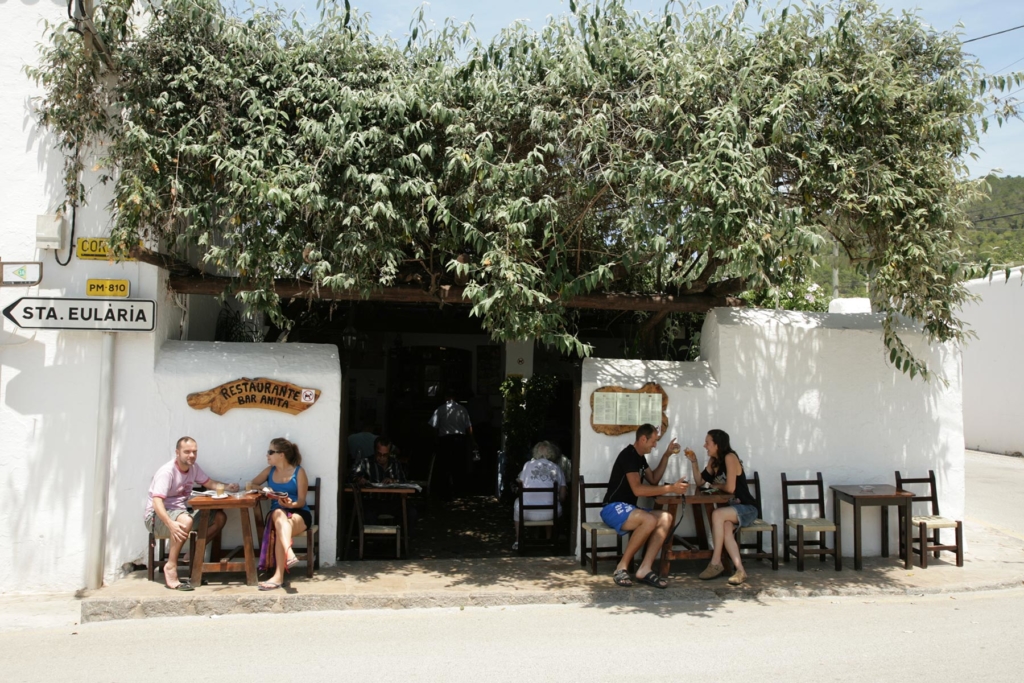