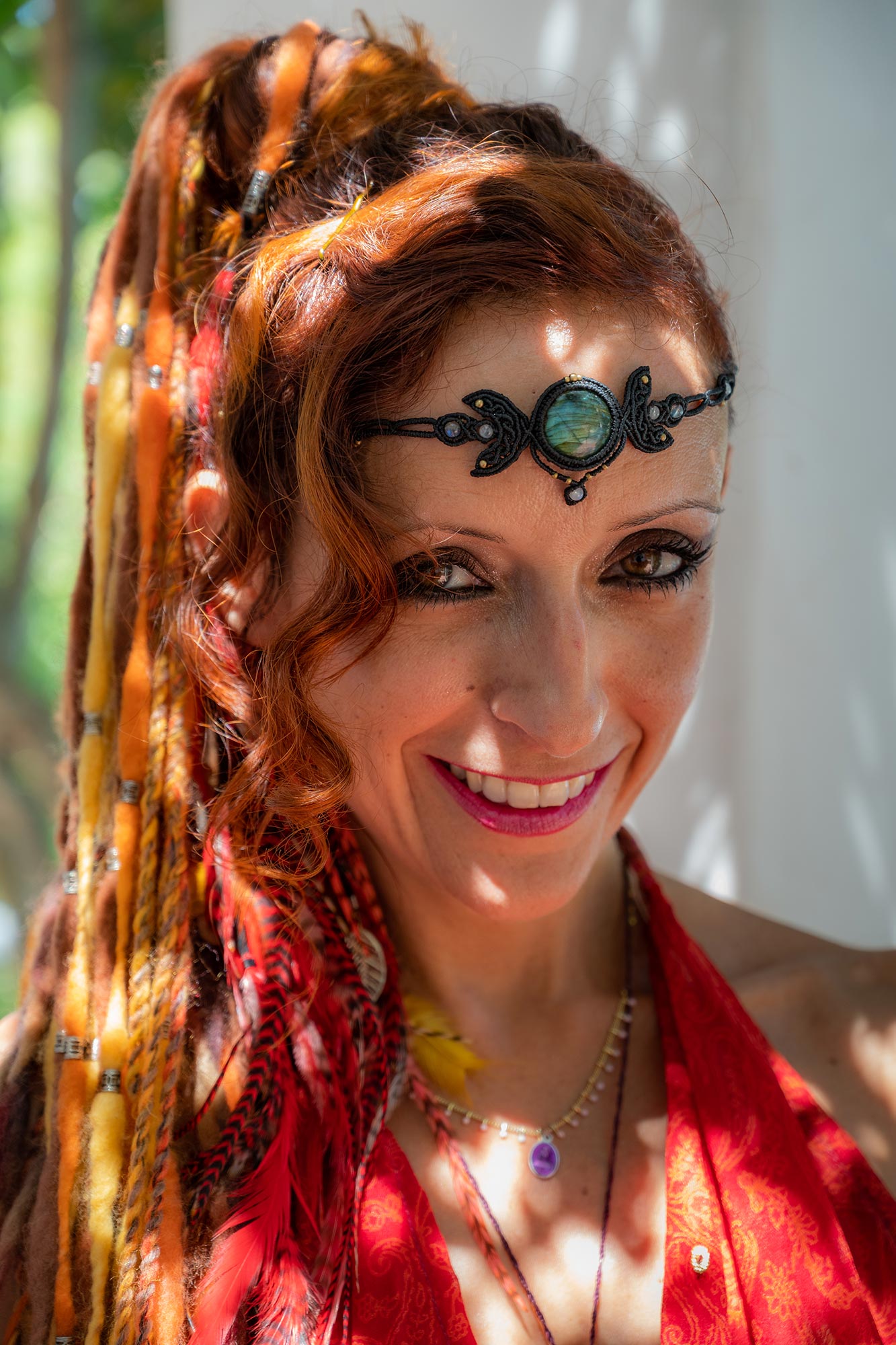 Ibiza is magical, a place of spirituality with a unique energy that attracts just such people – like Neliah Kandisha from Murcia. She arrived at the turn of the millennium, directly after returning from Peru, where her pagan parents sent her. To Mayan descendants’ in order to learn the family’s philosophy of life, which has nothing to do with the one that places monotheistic gods at the centre. But rather respect for Mother Earth and all life that surrounds her. And that is what the island icon stands for today.

I visited Neliah at her home, an old Ibizan country house. A villa over a hundred years old. Rustic. Pretty. With various terraces. On a hill, in the middle of a jungle-like, wildly overgrown forest. Trees, plants, birds – and an infinity pool characterise this fairytale ambience. Neliah invites me to one of the many green terraces surrounding her house. “Do you see the little fountain with the stone altar around it, Sascha? I built it because here, where the water rises, is the centre of Ibiza.”

I look it up on Google Earth – it’s true. Fascinated by this and the last weekend, where I was attending Neliah’s Ecstatic Dance event, I tell her about a rarely experienced surge of energy that has kept me going ever since. Logical for Neliah: “It’s simple, Sasha, during the ritual we die inside to be reborn. All the baggage you carry around disappears so you have room for new, positive things – and you become lighter.”

As profane as it may sound, that’s exactly what happened. And believe me, I have nothing to do with esotericism and patchouli. “Body, mind and soul work together – through the dance, which of course I accompany with rites, we give energy to Mother Nature – and she gives it back to us. It’s like a service, mutual. And hey, people have to stop telling kids they can’t dance, sing, etc. Dancing has been the very first healing therapy of mankind. Before we started to speak. It’s not about conforming to a norm in the process, it’s about doing it – exactly the way you want and feel. Dance away your worries. Heal yourself. It can be done. Believe it.”.

I ask Neliah if she has ever taken drugs to be able to make the comparison: “I tried it, sure, but I was disappointed. We all have light and shadow in us, we also have to live out both sides. It’s just a question of how. Everything you simulate with synthetic drugs. You can achieve without pouring poison into yourself. The drug is my heart and my body’s own ability to generate the energy you want. You have everything in you – any state of consciousness you can create naturally – if you listen to yourself, you know. Because the master, the guru, the alchemist – is within you. Look no further.”

Do people who take drugs to achieve a higher state of mind pass on the responsibility? To an alien alchemist? “Exactly, when you take drugs, it’s not you, it’s a part of this invisible, but very much palpable, alchemist. You only get to this state you wish for, if you produce it naturally. In real, a completely different, pure quality. Not just at that moment, but for days – the rest of the week.”

Neliah has known the club scene for a long time, her sets are celebrated, the dream of every after hour clubber. “I was out a lot at after hours, drinking my coffee and looking at people who were full of drugs but still tired. Weary. Not real. I didn’t want that anymore. I’m all about the music, the joy of it, experiencing the magic of sound. I want music – and not babbling people who ruin the experience for me.” (Laughs)

That’s why she started her Ecstatic Dance series. “I wanted to have the same thing musically, but without drugs, without alcohol, without chatters – the only language we tolerate is the language of dance and music.” You can feel that at her events.

She begins by invoking Mother Earth and spiritually connecting with nature before beginning her set with tribal ambient and Native American sounds, taking the audience on a hypnotic journey where you actually dance yourself into a kind of trance. Finally, after two hours, the group of 25 is brought down with soft sounds, a shavasana follows, similar to yoga, which Neliah ritually accompanies.

After a closing ritual where everyone is asked to say their wish to Mother Nature, they go home tired but happy. The next day, everyone feels full of energy and has a clear head for days.

Where did Neliah get these skills? “My family is of pagan tradition, which many people laugh at because we don’t believe in monotheistic gods. Yet we simply have a different philosophy of life, celebrate nature, care for it, uphold its values. Everything that surrounds you is you. Respect everything around you. Trees, birds, plants, earth. Treat everything the way you want to be treated. And we are beings of light. That’s why we celebrate the solstice. An ode to fire. Because in fire we burn all the old to be receptive to the new.”

Neliah is a multi tasking wonder and an output machine. Every day she gently brings club goers back down to earth with her “Nomadas Radio Show” on Pure Ibiza Radio. With a velvety voice and spacey ambient sound – and accompanies workers smoothly into the working day. Afterwards, Neliah gives yoga classes, often four in a row, has a quick bite to eat and spends the rest of the day organising events and retreats – to play DJ sets somewhere in the evening. In cult locations like Cova Santa.

Although her working day has an average of twelve hours, she always treats everyone equally with humility, respect and love – and her enchanting smile.

Which flashes again when Neliah concludes: “I really wanted to go to Ibiza when I was 19, because I knew I belonged here. But my father only allowed me to go if I first went to South America for three months and got educated by scholars there. That helps me today to be allowed to be what I am destined to be.”

A pulsating energy field whose light is as bright as the sun that shines from Neliah’s heart.