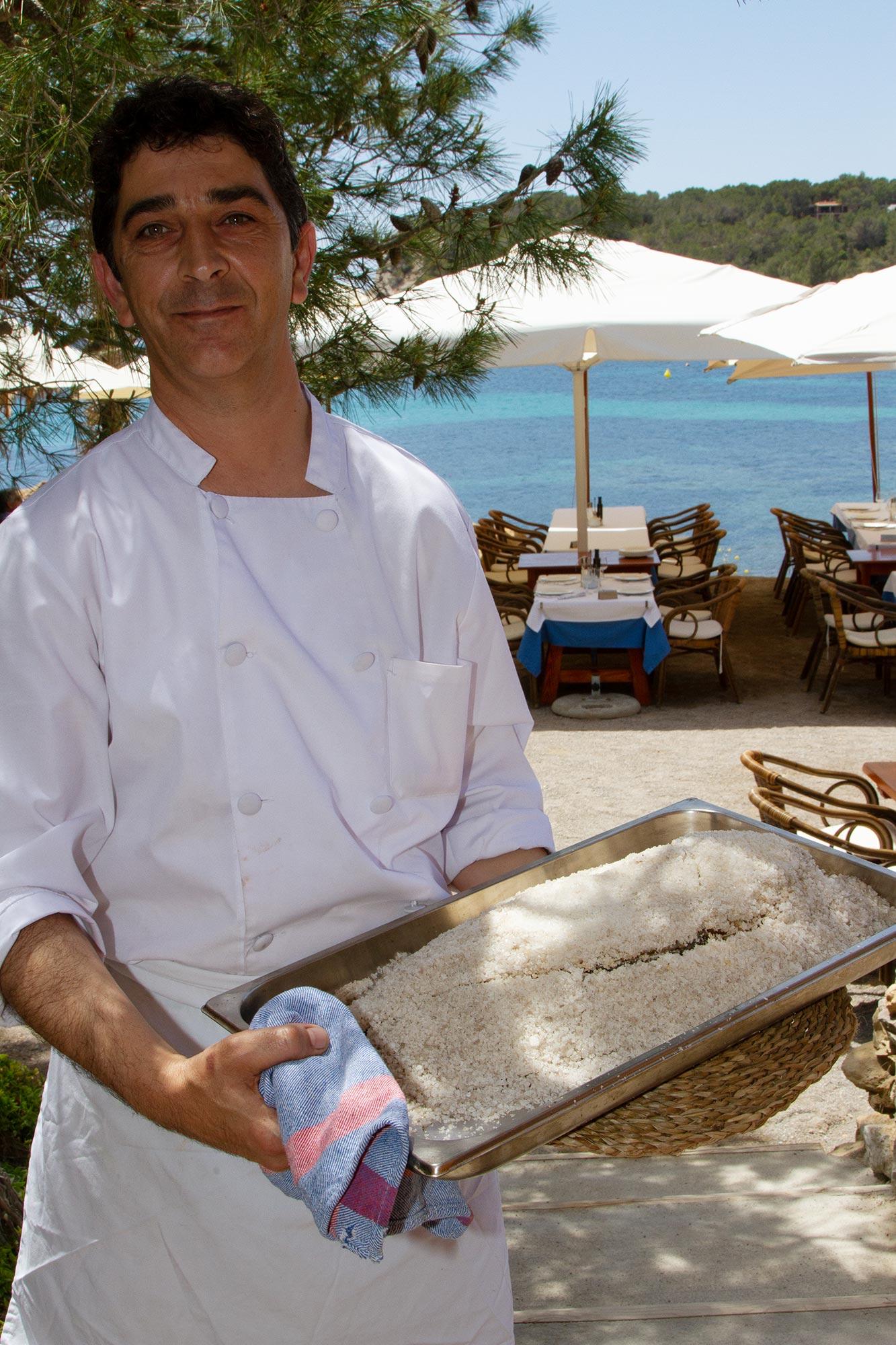 Every master has their own way of doing things, and that is why, at Es Xarcu, they follow their own rules. At the same time, those rules are their added value: serving fish and seafood that is always fresh. Situated in Cala Es Xarco, the range of cuisine offered by this restaurant is based on raw materials of such high quality that you don’t need to add anything else to them. “We don’t dress up or season our dishes; we serve them as they come so that their flavour is left unchanged”, says Ramón Vidal, head of the kitchen.

A resident of Ibiza for the last 18 years, he knows full well how the most nourishing foodstuffs that the island can provide him with should be handled. “Fish should never come into contact with fresh water because it takes away the flavour. It should always be cleaned and cooked in sea water so that it loses none of its properties”. It therefore comes as no surprise that somebody who approaches their work with such a high degree of care has become so successful among his diners, in spite of the simplicity of his recipes: “We lightly grill almost all the fish in order to seal them, and afterwards we finish them off in the oven for a few minutes; that’s all we do”.

Nonetheless, there are always exceptions such as the recipe that we are relishing today, salt-roast sea bream, or samorreta, one of his star dishes, which they boil and steep three times in a salt-based fish stock, before adding a touch of pepper, lemon juice and olive oil and accompanying it with a fine rice on the side. These recipes, along with most of the dishes, are kept on the menu every year simply because they work so well: “We have a style that we always stick to”. Nevertheless, new dishes are also introduced each season, such as seafood marinade or Galician style octopus.

One particular feature of Es Xarcu is that they do not serve cuts of fish which is why sirvia is not among the varieties on offer because they prefer to work with the whole fish, estimating between 400 to 500 grams per head. But above all, they insist on using local produce from the island, such as red prawns from Formentera, langoustine, lobster and dentex, among others. This is precisely what makes them stand out from the competition and what brings so many people every year, both Spaniards and foreigners, not to mention celebrities. People also appreciate their Cuban cigars and their wine list: “The variety of white wines alone extends to over 40 kinds because, in general, people do not drink so much red wine, even though rosé is fairly popular”, explains Mariano Torres, the owner of the business.

So now you know: if you wish to enjoy a complete maritime experience—and that does not just mean what’s on the plate, but also the spectacular views that surround it and provide its backdrop—don’t miss out this summer on a visit to Es Xarcu. It opens from 13:00 to 22:00 and up to midnight in summertime owing to the high demand. Oh, and just one more thing, don’t forget to reserve a table beforehand!

Salt from Ibiza’s salt mine

Ingredients for the garnish

Place the entire fish –without removing its scales– on a bed of salt and bury it so that not too much of it sticks out. One layer of salt is enough to cover it completely; this will depend on the size of each fish; it is not possible to state the exact amount of salt in each case.

Afterwards, once it has been placed with the salt on the tray, it should be placed directly in an oven that has to be preheated to a temperature of 230º. Cooking time varies according to the size of the fish: for 1 kg, 20 minutes.

For the garnish, peel the potatoes and cut them in slices. Tear the red and green peppers into pieces by hand since using a knife would alter their flavour. Cut the tomatoes in half.

Following that, fry the cloves of garlic—unpeeled—in plenty of oil. Then add the potatoes. When they begin to cook, add the already sliced red and green peppers. At the same time, place the tomatoes separately on a grill and grill lightly on each side.

The fish and the garnish will be cooked at almost the same time so remove them both from the oven and frying pan, respectively, and place them on plates along with slices of lemon, taking care when removing the salt that will have solidified around the sea bream. Now it’s ready to eat!